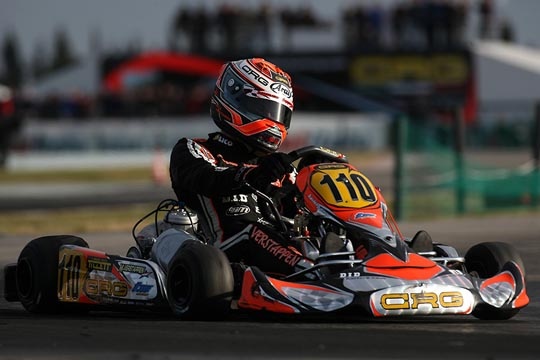 Press Release by: CRG
THE DUTCH DRIVER, THANKS TO HIS UNPRECEDENTED WINNING STREAK, LEADS THE CATEGORY. IN KZ2 ALSO JORRIT PEX AND FABIAN FEDERER. IN KF, NICLAS NYLAND AND FUMA HORIO WITH THE OFFICIAL TEAM. IN KFJ SEVERAL PRIVATE TEAMS WITH CRG. ELISEO MARTINEZ OF TEAM GAMOTO IS THE 60M MINI LEADER.

Lonato del Garda (Brescia - Italy). It is WSK Master Series time again. The second round is hosted on the International Circuit Napoli in Sarno (Italy) which, a fortnight later, will be the venue also for the WSK Euro Series. A double appointment where CRG is going to play its usual leading role.

VERSTAPPEN ARRIVES AS THE KZ2 LEADER. In this second round of the WSK Master Series, in KZ2 CRG official team presents the current leader of the Series, the young Dutch driver Max Verstappen (picture above), who was simply unbeatable in his first part of the season, and not only in this category: in fact, he has already won also in KZ1 and in KF2 in the season opening race, the Winter Cup. After winning the first two finals of the Master Series in Muro Leccese, Verstappen – on CRG-Tm -  can boast an unprecedented winning and steady pace, thanks to his streak of victories which includes the two double KZ1 finals in the Euro Series in Muro Leccese and, last week, in Zuera. In Sarno, Verstappen aims at gaining morepoints and at widening the gap in the standings.

Together with Verstappen, in Sarno, also his fellow countryman Jorrit Pex, on a CRG-Tm of the CRG Holland team. Pex produced very good performances in the two rounds of the WSK Euros Series and he currently occupies the sixth position of the WSK Master standings.

Also Fabian Federer is racing on a CRG in KZ2: he is the fifth of the standings, powered by the new Modena engine. Other CRG drivers in KZ2: Giuseppe Amodeo of Gamoto team, Kristijan Habulin of KK1, and Sinan Van Der Raad with CRG Holland.

IN KF NYLAND TRIES TO CLIMB UP THE STANDINGS. In KF,  CRG official team presents itself with the Finnish Niclas Nyland (in the picture), eager to climb up the standings from his current 11th position asquickly as possible. Together with the Finnish driver the Japanese Fuma Horio, both powered by a Parilla engine prepared by KVS which, in Zuera, showed its excellent qualities thanks to Felice Tiene's victory. With the Forza Racing team - on a CRG-Tm kart -  the Polish Igor Walilko and the Irish Henry Odhran. With LH Racing, the Danish Kevin Rossel.
In KFJ, CRG is represented by private teams. With Forza Racing there is the English Billy Monger, with DFR Devlin De Francesco, with CRG Holland the young Stan Pex, Jorrit's younger brother, with LH Racing the Belgian Matteo Raspatelli and Pietro Mazzola.
In the uncertain 60 Mini, the Spanish Eliseo Martinez on CRG/Hero-Lke of the Gamoto team arrives in Sarno as the leader of the standings. With the Italian team also the Malaysian Muizzudin Bin Abdul Gafar and the Greek “Konstantinos”. With LH Racing the Belgian Esteban and O Neill Muth, with KK1 the Croatian Max Herendic, with AB Motorsport the Russian Bogdan Fetisov and Francesco Tripoli.