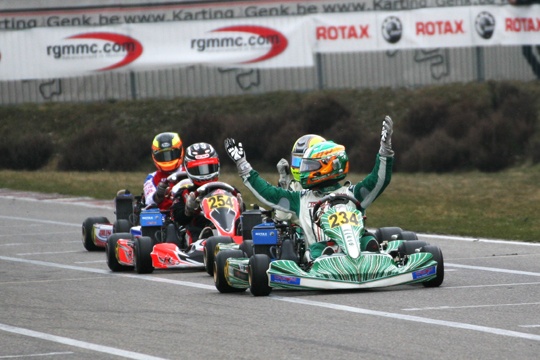 With a thrilling and spectacular race Sunday the ROTAX MAX Euro Challenge completed its 2013 opening round at Genk (BE) today. Since Friday over 200 drivers from over 35 nations claimed their ticket for the final phase, which today saw the best pilots fighting for the first wins in the categories of MAX Junior, MAX Senior, DD2 and DD2 Masters. Although conditions stayed really wintery for the final day, the track luckily kept dry, which provided a perfect ground for the racing action.
In DD2's prefinal pole setter Xen de Ruwe (FK Racing Team AB Ltd) lost his lead immediately at the start. He had to leave the door open to Sean Babington (Dan Holland Racing) and Finland's Miika Laiho (MPT Racing). Yet de Ruwe kept in touch with the top. After one third of the race distance, leader Babington was visibly losing performance, finally only ending up on rank four. On the top Laiho did not leave any doubt. He defended the lead until the chequered flag ahead of Xen de Ruwe and Sandro Lukovic (Intrepid Driver Program). Actually it was the reigning world champion Ben Cooper (KMS Europe) crossing finishing line in third place, yet a penalty for leaving the corridor threw him back to seventh place again.

Xen de Ruwe, Miika Laiho, Ben Cooper, Sean Babington and Ferenc Kancsar (KMS Europe) formed the leading quintet in the final. After a few laps Hungary's Ferenc Kancsar proved to be quickest, making his way through the pack until his opponents struck back and pushed the Birel driver back into fifth place again. Cooper and de Ruwe were the next ones trying to improve their positions. But both got into a slight collision, which cost the targeted podium. The flying Finn Miika Laiho was not bothered by this incident at all. He kept cool and crossed the line in first position, closely ahead of Kancsar and Babington, who completed the first podium of the year.

In the classification of the DD2 Masters only two drivers qualified for the final phase, namely Florent Lambert (Tatum Racing) and Christophe Adams (Sporting Formula K France). While Adams decided the prefinal in his favour, Lambert took the victory in the decisive final.

With a pile-up, involving almost ten drivers, the juniors started into their prefinal. Most prominent victim of the crash was pole setter Josh Price (Chris Rogers M/Sport), who found himself being pushed back to the very end of the grid. Lando Norris (RL Racing Dept UK), fresh from his KF3 win at Zuera, and Connor Hall (Strawberry Racing) were the lucky ones marking the new leading duo after a few laps. Quickly it became clear, that Hall seemed to be the fastest man on track. So it was no surprise that the Winter Cup winner took rank one soon. Yet the race was not over and a small mistake of Hall was seized by Norris without any mercy. From then on Norris defended his position by all means and took the victory in front of Connor Hall and Guan Yu Zhou (Strawberry Racing).

In the final Lando Norris had a much easier job. While there was a starting collision again, the Tony Kart driver headed away from the grid. By halftime his leading gap was big enough to control it until the falling of the chequered flag. Behind the winner Connor Hall had a bad start. Nevertheless he recovered quickly, making his way up again, which finally was rewarded with second position. A well-deserved third place went to Shanaka Clay racing on an Sri Lankan licence but living in the UK.

Senior prefinal seemed to become a triple fight between James Singleton (Coles Racing), Harry Webb (Strawberry Racing) and Ludvig Morin (Paul Carr Racing). The trio quickly headed away from the grid. But by halftime the top three began to struggle for positions thus gaming away their leading advantage. Suddenly about ten drivers caught up and mixed up the classification dramatically. Positions changed perpetually until the very last lap and only time keeping was able to state the final order. And here it was Edward Brand (Intrepid Driver Program) being first in finish just ahead of Harry Webb, James Singleton, Charlie Eastwood (Strawberry Racing) and Connor Jupp (Dan Holland Racing). Yet the winner's cheer was of short time. Brand was penalized with ten seconds, as he took advantage by cutting off the track in the very last lap. Him slipping back to position 18, it was Webb inheriting the full points for the win.

Who thought, that prefinal already was a terrific show, was not disappointed in the final either. James Singleton, Connor Jupp, Charlie Eastwood and Harry Webb delivered a tough show on the top. When it got to the final spurt manners got rougher, resulting in Jupp and Webb getting off the track and by this losing their chances for podium. Singleton on the other hand got the lead, the win within his grasp. But he did not expect a final attack of Charlie Eastwood. The man from Ireland seized his chance in the last but one corner. With a slight contact Eastwood managed to get through, which made him win the race in last minute. Singleton dropped back some positions and showed some unsportsmanlike behaviour after the race, which he finally was disqualified for. The podium was completed by Aavo Talvar (Talvar Racing) from Estonia, and Oliver Norris (RL Racing Dept UK Ltd) from the UK.

After the first breath taking round the ROTAX Euro Challenge hopes for warmer weather at the second event at Castelletto (IT), which will take place from 20th to 26th of May 2013. But one thing is sure right now: The race action will be hot indeed! So stay tuned on the official website www.rotaxmaxeurochallenge.com, where you get all information regarding reports, photos, results and live TV stream.