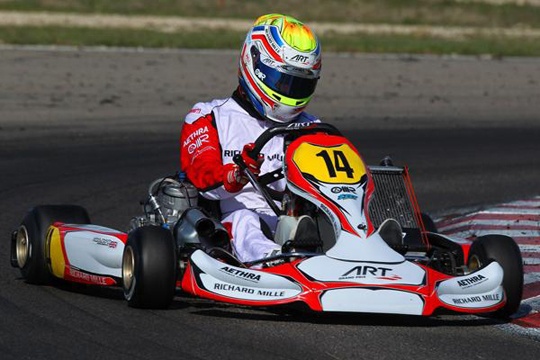 Not the best of weekends the one just ended at the International Circuit of Zuera for ART Grand Prix in terms of results, with Ben Hanley’s two podium finishes to make the headlines. And yet, the overall performance of the equipment used by the ART Grand Prix team tells of a consistent development that is due to bring more and more success during the season.
Starting with the gearbox category, KZ1, Hanley proved yet again the competitiveness of his equipment by landing 5th and 3rd in Saturday’s two heats after stopping only the 11th fastest time in qualifying. The first final saw the British driver having a race-long fight for the third step of podium, which he ultimately gained following the exclusion of the winner post technical checks. On Sunday, Hanley did even better with a 3rd and a win in the heats, and a superb 2nd place in the final after leading in the early stages of the race. With this podium, Ben further consolidated the provisional 2nd position in the championship.
Tough Spanish weekend for Charles Leclerc, qualified 13th in timed practice, but out with two crashes in both heats on Saturday. The two retirements forced the young driver from Monaco to start the first final from the back of the field and to try a nearly impossible comeback, ending 19th. On Sunday, Leclerc made amends climbing back up to 16th and 9th in the heats, and lapping similar times to his team mate. A rough scrap in the first few laps of the final saw him dropping down to 19th place, which he turned into 15th by the chequered flag.

Mixed feelings for ART Grand Prix Team manager Armando Filini also in KF, with his three pupils having to work hard in Zuera. Best of the lot, French driver Valentin Moineault who remarkably moved up from 21st to 9th in prefinal and grabbed 7th in the final after performing well also in the heats – one win, a 6th and a 10th his best results with two fastest laps. Still showing the need to improve in qualifying practice, round 1 winner Ben Barnicoat was the fastest of the ART Grand Prix boys stopping 19th fastest time. Two 3rd places, one 7th and a 15th place in the heats put him on row 5 in prefinal starting grid. But after the start, the first lap was abysmal, sending the young Briton to the back of the field where he would stay all the way to the chequered flag. The final brought out all of Ben’s incredible talent, as he managed to climb up from 25th to 9th after a tremendous recovery. With such a strong display, Ben gained some valuable points for the championship where he sits in 2nd.
Difficult weekend for Vivacqua, compromised by a weak qualifying – only 54 – and a retirement in the heats which prevented him to go through to the final stages.

Signs of improvement also in KFJ, with some top-10 results in the heats, three ART Grand Prix chassis making it to the final, and Venezuelan Diego Borrelli hitting the best result of the team in the final closing 23rd from 33rd on starting grid. Good performance also by Finn Olli Peltola, at his debut with ART Grand Prix Finland satellite team. Faster qualifier of the lot, he pulled off two top-10 and two top-15 finishes in the heats, also making it to the final. Sette Camara and Xia used the race in Zuera to pile up mileage and get more experience in such highly competitive field, almost making it to the final.


Armando Filini (Team Manager)
“The weekend was all in all positive. There are some areas we have to improve on, particularly the qualifying session where we struggle a bit to get the tyres working properly in few laps... and it applies to all categories.
In KZ1 Ben did a superb job to pull off two podiums, unfortunately Charles got caught in two race accidents on Saturday, but it’s all part of the learning curve and it will make the most of it in the next race.
In KF Moineault had a very good, consistent weekend, Barnicoat was involved in a race accident at the start of the prefinal, but both had the pace to grab the podium.
In KFJ we still suffer in terms of performance compared to the competition, and our drivers lack some experience. But we are working very hard to bridge the gap, and we can already see some improvements with our more experienced Finnish drivers who had a positive heat session also making it to the final.”

Ben Hanley (KZ1)
“I feel we made the most of what we had in Zuera. The competition is really strong and we have to keep working in this direction if we are to finish ahead of our opponents. We have to improve in qualifying, because with this format one bad result often compromises the following session, and it’s almost impossible to recover in this top-notch, highly competitive category.”

Valentin Moineault (KF)
“The result is not quite what we expected. We had the pace to aim at the podium, but a DNF in one of the heats compromised my prefinal starting grid position. Nonetheless, I had a very good run in the prefinal making up many positions, but in the final I got stuck in a race-long battle with the chasing group and couldn’t quite join the top of the field. Anyways, we grabbed good points and we look forward with optimism to the next race.”