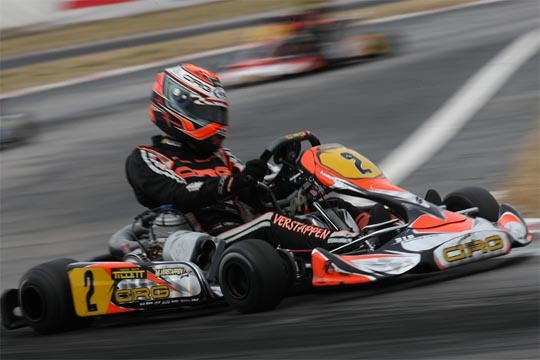 Press Release by: CRG
IN KZ1 MAX VERSTAPPEN (ABOVE) LEADS THE RANKING FOLLOWED BY JORRIT PEX: THEY ARE BOTH READY TO BATTLE ON THE SPANISH TRACK TOO. IN KF FELICE TIENE COMES BACK ON THE TRACKWHERE HE WON LAST YEAR'S KF2 WORLD TITLE. GOOD EXPECTATIONS ALSO FOR THE SPANISH ALEX PALOU. THE JAPANESE YUTA SHIRAISHI IS AT HIS DEBUT ON CRG. IN KFJ PRIVATE TEAMS AT THE START.


Lonato del Garda (Brescia - Italy). This weekend, with the arrival of the spring, it is time for the second round of the WSK Euro Series in Spain, inZuera, where the CRG official team is ready to play - as usual - a leading role and to show the excellent performing qualities of its technical equipment in all the categories.

Theevent in schedule on the fast racetrack of Zuera (Spain) is definitely an important one: after the event the situation of the rankings is definitely going to be interesting and, with the four round championship at its halfway point, we will be able to have a clearer idea about the values of drivers and teams, with CRG, especially in KZ1, standing a great chance to confirm its leadership and to widen its lead in the ranking thanks to Max Verstappen and Jorrit Pex.

VERSTAPPEN AND PEX LEAD IN KZ1. Max Verstappen (CRG-Tm)  is defending his leadership in KZ1. He can boast a full success in the first round of  Muro Leccese and 85 points in the ranking. Verstappen is followed by his teammate of CRG Holland Jorrit Pex (CRG-Tm), 40 points.

Great expectations in Zuera also for the performance of the 2012 KZ2 World champion Jordon Lennox-Lamb, immediately competitive in Muro Leccese too despite his bad luck for an accident in Race-2. At his debut in the top category, the KZ1, he was immediately among the best drivers.

Jonathan Thonon and Davide Forè, both on  CRG-Maxter, areready to redeem themselves after their unlucky performances in Muro Leccese, where they got involved in some accidents and had some technical troubles. The two CRG drivers have to climb up the ranking as well as  Fabian Federer, excellent  poleman with the CRG-Modena but then, during the races, slowed down by penalties at the start and involved in a couple of accidents in his first race of the year in the WSK Euro Series.

IN KF CRG STRIKES BACK. In the KF category, CRG keeps on developing the new Parilla engine and, on this occasion too, CRG fields a good number of top drivers, beginning with the reigning world champion in KF2  Felice Tiene, who won last year's title right on the track of Zuera with a terrific "hat-trick" preceding Verstappen and Lennox. Togetehr with Tienethe Spanish  Alex Palou, who is expected to do a good performance on his home circuit and who did well at his debut in this category in Muro Leccese too, and the Finnish Niclas Nylund, the Japanese Fuma Horio, the Canadian Zachary Claman DeMelo, all on CRG-Parilla.

From this appointment onward, at his debut on CRG, another interesting Japanese driver, Yuta Shiraishi, tenth in one of last year's finals in Macau in the KF1 World Championship and near to his debut in car-racing in Formula Abarth.

FOCUS ON THE KFJ YOUNG DRIVERS. In the KF Junior, CRG participates with private teams and several young drivers, such as the DFRteam which fields the interesting Devlin De Francesco, then  Forza Racing with the quick Robert Shwartzman and Billy Monger, PF International with Philip Rawson, CRG Holland with Stan Pex, and the Spanish drivers of the M2 Racing team,Marta Garcia, Xavier Lloveras and Lisard Santos.

Also the LH Racing team has a good number of competitive drivers. In KF, with Lewis Hamilton's brand, there are the Danish Kevin Rossel, the two Finnish Jussi Kuusiniemi and Johannes Heinonen, the Spanish Pedro Hiltbrand Aguilar. In KFJ the LH team fields the Finnish Niko Kari and the Belgian Matteo Raspatelli.

In this appointment also the 60 Mini, which will run again for the WSK Euro Series on 21st April in Sarno for the event which will assign the title for this category.