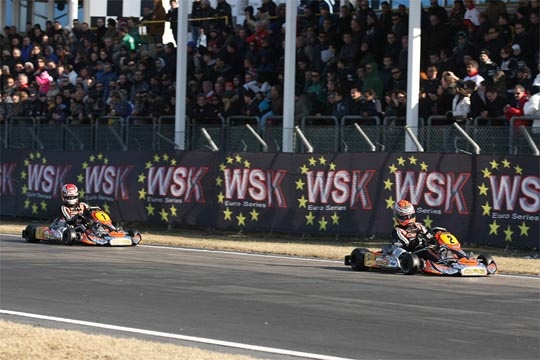 Press Release by: CRG
MAX VERSTAPPEN DOMINATES THE KZ1 WITH JORRIT PEX THIRD ON THE PODIUM OF FINAL FINAL-2 AFTER THE FIRST TWO PLACES OF FINAL 1 ON SATURDAY. LENNOX AND FEDERER GOT INVOLVED IN A CRASH. IN KF GOOD DEBUT FOR ALEX PALOU. IN THE 60 MINI THE LEADER IS ELISEO MARTINEZ OF THE GAMOTO TEAM.

La Conca (Lecce - Italy). Another terrific victory for CRG in KZ1 thanks to the young and fast Dutch driver Max Verstappen: with his CRG-Tm, on the International circuit La Conca of Muro Leccese dominated the first round of the WSK Euro Series. Also Verstappen's teammate, Jorrit Pex, always on CRG-Tm, did a great performance and deservedly stepped onto the podium of Sunday's Final after placing second in Saturday's Final.

In this first round of the international season  of the Euro Series, CRG in KZ1 was the absolute protagionist thanks to many of its drivers. And the final result could have been even more resounding if Fabian Federer, poleman in qualifying on his CRG chassis powered by Modena Engines, and Jordon Lennox-Lamb, who achieved an impressing series of excellent performances on his CRG chassis powered by Maxter, had not got involved in a crash during Sunday's final.

The flawless and overwhelming double success achieved by Max Verstappen in the two finals on Saturday and Sunday - at his first experience in KZ1, besides confirming the usual performing qualities of the CRG chassis in the most powerful category of international karting - is a further sign of the great talent of the young,Dutch driver, who is getting more and more successful. The son of the former F1 driver Jos Verstappen is literally dominating the ranking of this first part of the season: his previous wins in the WSK Master Series in KZ2 and in the Winter Cup in KF2 say it all.

“This year is very important for me - confirmed Verstappen after his triumph in KZ1 inMuro Leccese - . I aim at winning in all the categories, both in KF and in KZ. Next year I'll move to car-racing  and I'd like to win as many titles as possible in karting. I race in ideal condition, with a fantastic CRG chassis and powered by a really competitive TM engine. I'm really happy for how my season has begun. In La Conca the weekend was good for all of us, for me and for Jorrit Pex too, also thanks to excellent team work. On Saturday we arrived in first and second, on Sunday first and third. A great beginning thanks to CRG and TM. I felt like fying..."

IN KZ1 VERSTAPPEN AND PEX RULE.  After this first round, Max Verstappen and Jorrit Pex occupy the first two positions of the WSK Euro Series in KZ1, with 85 and 40 points respectively.
About the other CRG drivers in KZ1, there is some disappointment for Jordon Lennox-Lamb: powered by a Maxter engine directly prepared by the Factory, he placed fourth in the first Saturday's final, while on Sunday's final, after starting from first position, he was obliged to retire for a contact with Fabian Federer which damaged one of the wheel-rims. Federer, on the other hand, after setting a record lap in qualifying, had to be content with the 8th place inrace 2 after placing 10th in race 1. In race 1, anyway, Federer was the protagonist of a great recovery from the bottom of the pack where he got relegated after being hit by some penalties during the heats. In Sunday's final Davide Forè, on CRG-Maxter, managed to place 11th despite a sore hand he got after an accident with his teammate Andrea Dalè. For Jonathan Thonon it was a troubled weekend despite his speed wasexcellent. Some technical troubles in Final-2 obliged him to give in despite a promising series of overtaking manoeuvres at the beginning of the race.
In KZ2 victory went o Marco Zanchetta on Maranello. In Final 2, on Sunday, Giovanni Martinez on CRG-Maxter achieved a promising 8th place. On the other hand, Daniele Delli Compagni (CRG-Tm), who in the first final  on Saturday placed 9th, was obliged to retire.

ALEX PALOU IN KF IS IMMEDIATELY COMPETITIVE. In KF the Spanish Alex Palou, on CRG-Parilla, at his debut in this category after last year's victory in KF3, showed all his performing qualities. He managed to enter the Superpole after qualifying and then, did well in the heats and he even won in the last qualifying race, although he was eventually hit by a 10-second penalty for jump start. In the Pre-final he closed the gap and reached the 8th place. Then, in the final, he arrived in 12th. Tough start in KF2, on the other hand, for Felice Tiene: he is engaged in the development of the new Parilla engine and, in the Final, he did not manage to start for a trouble with the carburettor. Other troubles and accidents occurred to the other CRG divers, such as the Finnish Niclas Nylund, 22nd in the Final, and Zachary Claman DeMelo, 28th after a promising 13th place in the Pre-final and asecond place in one of the heats. In qualifying the Japanese  Fuma Horio got involved in a series of accidents and he did not manage to enter the final phase.
The best performance among the LH Racing Team drivers was achieved by the Spanish Pedro Hiltbrand Aguilar, on LH-Parilla, with a good 13th place in the Final.

IN KFJ STAN PEX IS THE BEST. In KF Junior, the best among the CRG private drivers was Stan Pex, 15th in the Final,while Billy Monger (19th) and Robert Shwartzman (21st), both driving for Forza Racing, finished a bit behind. Devlin De Francesco, in the Final, got disqualified for not having taken heed of a warning. That is a real shame, because the American driver had finished 8th at the end of the heats.

MARTINEZ'S BID FOR THE 60 MINI TITLE. In the 60 Mini there was the confirmation of the great competitiveness of the Gamoto Team and of its drivers on CRG/Hero-Lke. They were all protagonists of the race until the final victory of the Spanish Eliseo Martinez and of the second place of the Malaysian Abdul Gafar Muizzuddin. With this excellent result, the two young drivers are leading the ranking with 85 and 40 points respectively: this could be a winning bid for the title which will be assigned next round in Sarno on 21st April.

NEXT EVENT. The second round of the WSK Euro Series is in Zuera on 24th March.

THE INTERVIEWS.
Euan Jeffery, CRG team manager CRG: “In KZ1 we had another great weekend thanks to Max Verstappen, who won almost all. He just missed victory in one of the heats because he slipped on the water leaked from the radiator of one of his rivals. His performance in KZ1 was really amazing. Jorrit Pex, too, did well and gained a well deserved podium. We are sorry for Jordon Lennox-Lamb and Fabian Federer. they got involved in a crash. On the whole, this race too showed how outstanding are the qualities of the CRG chassis: there were moments in theFinal where we could see 7-8 CRG drivers in the first 15 positions. Both Thonon and Forè had some technical troubles, otherwise they would have been able to achieve a good result too. In KF2 we met some problems in developing the new Iame engine but we are sure we can reach the necessary competitiveness to battle for victory. In KFJ we did quite well also with the young drivers of the private teams, but in the final, for a series of problems, they did not manage to reach the first positions. In the 60 Mini the Gamoto Team, with our chassis, played the leading role of the category throughout the whole weekend."

Max Verstappen: “The weekend started well and ended even better. We were fast since freepractice. We had some troubles in qualifying, but the third place was not too bad. Then, for the heats, we changed the setting of the chassis and we easily won. I did not win any heat because I slipped off the track when I put my tyres on the water leaked from someone's kart: I arrived first and I went off thetrack."

Jorrit Pex: “For me it was a good weekend. I was always in the top positions and very close to max, who this time was really unbeatable. I'm happy for the result, because both I and Verstappen were on the podium. A double podium which is really satisfactory for us."

Jordon Lennox-Lamb: “I made a mistake in the start of Final 1, where I was in the front row. I dropped back and I had a contact with Federer. I damaged the wheel-rim and I had to pull over. Anyway, I'm happy for the way my first week in KZ1 went. I was always among the top drivers powered by my Maxter engine directly prepared by the Factory. This is very important for me."

Jonathan Thonon: “I didn't get a good result, but my laps were really good, both in the heats and in the finals. This is my first race of the year and I'm happy for the speed reached. In the Final, before my retirement, I did a series of good overtaking manoeuvres, but a technical trouble obliged me to stop. That's a shame because I felt at my ease on the kart and the chassis was really excellent. I could have finished with the top drivers. The weekend confirmed that the CRG chassis in KZ1 are the overall most performing and this is a good thing for the Company."

Alex Palou: “This is my first experience in KF2 and it is not easy, especially because my rivals are really strong. It is harder than in KF3; here the skill of the drivers is much better. I find at my ease with the driving: the front brake that they have in KF2 is new for me, but I didn't have particular troubles. I hope to do well as soon as possible, starting from the next race on my home circuit in Zuera."