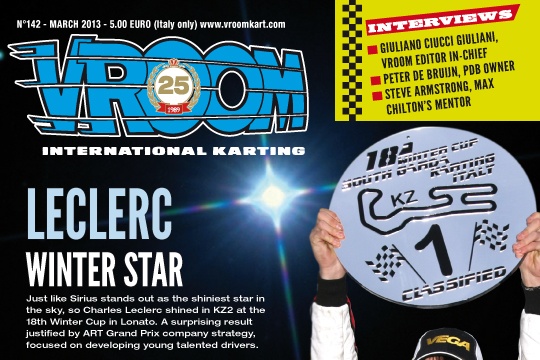 After the winter break, things started to get serious in a freezing-cold South Garda circuit in Lonato for the 18th edition of the Winter Cup. The snow didn’t stop our heroes from taking to the track and produce truly outstanding races, which saw debuting KZ2 driver Charles Leclerc topping the standings in a star-packed field. You also find some technical tips for taking your kart back on track, three high profile interviews, Praga Dragon exclusive track test, and much more.
FROM THE EDITOR
Vroom and the global multimedia message
We all know what globalization means: progressive growth of relationship and exchange in many fields on a world wide basis, the main effect being economical and cultural standardisation between different people and places in the world. (Wikipedia).

Just this introduction tells us that for years now also we at Vroom have been working to get a policy for information concerning karting, obviously, that is capable of keeping up with the time we are living and whether we want to or not, that goes with the wave of that social-economical phenomena - yes, globalisation – whose importance is relevant in our future, because it is connected to the evolution of modern society.

The new multimedia technologies have made us look into some parameters concerning communication. And our duty in this world, more and more dependant on news that keep us updated in fractions of minutes on what is happening in any corner of the world, is to divulgate any information that could influence positively and promote karting. Because, although one might think that this motorsport depends mainly on being able to afford it, it is also true that the passion for karting plays a determining role. And karts are the vehicles that are more appropriate for attracting a great number of fans.
Karts offer several solutions. And because of this versatility, it is easy to locate in any social field. Our job is to divulgate this message with the right information all over the world.

So, after 25 years since Vroom came out and 14 years since the birth of Vroom International for the international karting movement, published in English, with this futuristic vision we have decided to widen our platform to draw more fans to the sport: for this reason you can now find Vroom Spain digital version.

A historical initiative! This we can say without any risk of exaggerating. However, it is only the first step; because the most important part of the job will be from here on. We have to enhance and represent the Spanish karting movement, respecting all those who work to keep it going and help to promote the sport, underlining the drivers’ actions that reflect the enthusiasm and passion for this sport that we share.
It binds us, like the crises that has been hitting this motorsport for nearly 4 years now. But it is in such hard times that sharing the same aim helps things to pick up. Promotion is fundamental, nothing new in it, but putting order in all the existing confusion is just as important. Information helps to find new programs to re-launch this fantastic sport.
Hasta la vista

RACE REPORT – 18th Winter Cup
Snow fall early on in the long week in Lonato did cause one or two difficulties, but on the other hand, if this wasn’t the case they wouldn’t have called it the Winter Cup, even if it is hard to remember such bad weather...

INTERVIEW – Giuliano Ciucci Giuliani
For Vroom’s 25th anniversary, I have asked my “Boss” to allow me to interview him and after nearly three months he has at last agreed. He had no intention of blowing his own trumpet; he just isn’t that sort of guy. And yet, on my behalf, I had this growing urge, spontaneous and loyal, to give someone who, over the past 25 years has set up all this, his due. Results of hard work, dedication, and battles.

TALKING TO – Peter de Bruijn
From Asia to South America without forgetting his deep-rooted European background, Peter de Bruijn intensifies his efforts in the new markets to strengthen the reach of his PDB Racing world championship winning equipment and of his latest creation, the Maddox. We talked to Peter while in the middle of the Rotax Asia Challenge in Kuala Lumpur, Malaysia.

ONE ON ONE – Steve Armstrong
When Marussia F1 announced that Max Chilton had graduated from his role as the team’s third driver to a full time race seat, he not only became the fourth Briton to take his place on the 2013 Grand Prix grid but also the latest success story from the UK’s famed karting ranks. Vroom travelled to the world-famous PFi circuit in England to talk to the man who knew him best back then.

CLOSE UP – Equipe de France FFSA Karting
Since its establishment in 2000, the “Equipe de France FFSA Karting” team structure has really evolved. At the beginning, the aim was to recruit the best French representatives in the world of racing in order to help them to give France the highest possible number of wins while supporting them in becoming fully-fledged professional drivers. In 2010, it began to focus more on the training of young national talents

DEFEATS THAT STING – Vitantonio Liuzzi
September 24th 2000. The Formula C World Championship is held for the last time on the Belgian track in Mariembourg, the gear class that till then was going strong together with the alternative direct drive Formula Super A. Liuzzi is an official driver in force with CRG; he is the FSA World Champion, a title won just a few months ago. He is on starting grid, waiting for lights, eager to go on row two grid...

RACE REPORT – Rotax Invitational Race
The Rotax Invitational Malaysia event, the first of the three scheduled this year, was held at the Sepang International Karting Circuit, with Orr, Inui, Hishammudin and Musyaffa grabbing the win in DD2, Rotax Senior, Junior and MicroMax respectively. 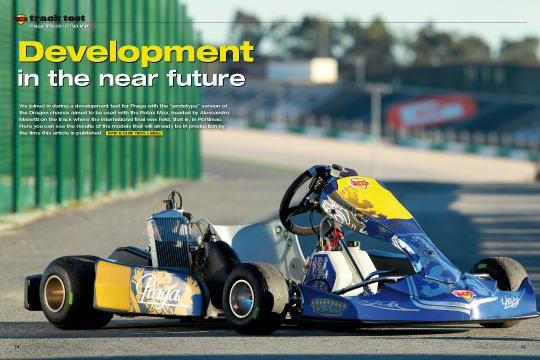 TRACK TEST – Praga Dragon / Rotax Max
We joined in during a development test for Praga with the “prototype” version of the Dragon chassis aimed to be used with the Rotax Max, headed by Alessandro Manetti on the track where the international final was held, that is, in Portimao. Here you can see the results of the models that will already be in production by the time this article is published. 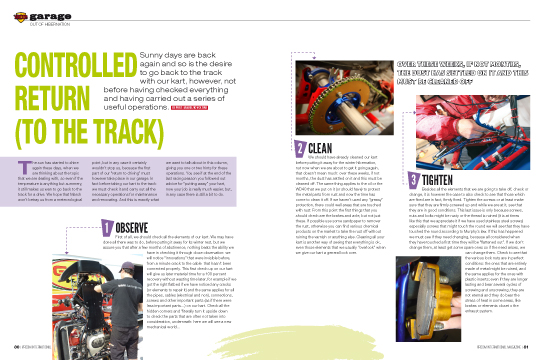 GARAGE – Out of hibernation
Sunny days are back again and so is the desire to go back to the track with our kart, however, not before having checked everything and having carried out a series of useful operations.

TECHNICAL SIDE – How to avoid technical hold up
Together with the technical matters, there could be others, more boring, but sometimes they could make you waste time, get sidetracked or even cause serious problems. Let’s see how to avoid some problems concerning feeding the engine.

VROOM VINTAGE USA – Vintage Kart Olympics 2012
What was initially planned as a one time only event in 2001 to commemorate karting’s yesteryear celebrated its eleventh anniversary in 2012. The Vintage Kart Olympics meeting, held on 7-9 September at TNT Kartways in West Quincy, Missouri, attracted vintage karting enthusiasts from all across America. 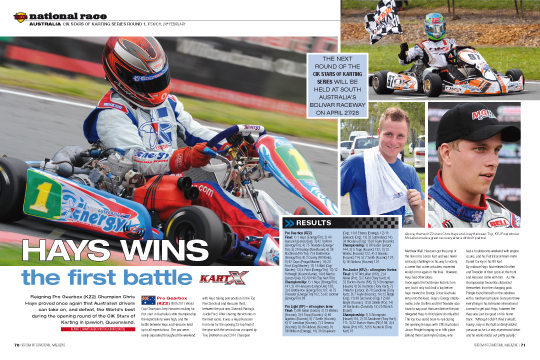 NATIONAL RACES
National calendars are starting to come to life, as we report from the German Winterpokal in Kerpen, the USA Challenge of the Americas, and Australia’s CIK Stars of Karting Series opening round. 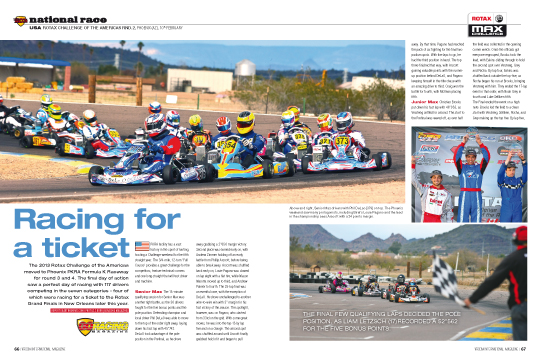 COLUMNS – Mondokart, VroomMama, April National and International racing calendar
The CIK recently published the list of companies that were assigned the tenders for the 2013 CIK Championships and beyond. Besides this, following some doubts and rumours heard at the Winter Cup, we shed some light on CIK art.12 regarding KZ engines. Still from Lonato, we discovered the new Tillotson featuring a handy button for leaning. MaxSpeed announced more tickets for the Rotax Grand Finals; the FFSA launched the 1st Handikart International Trophy; while ART Grand Prix unveiled its new Academy in Malaysia.
In the new column VroomMama dedicated to our younger readers we talk about a very useful book, the European Commission White Book.
As we move into the beginning of the racing season pretty much anywhere, April National and International racing calendar features 36 national events in 19 countries, as well as 3 major international races.