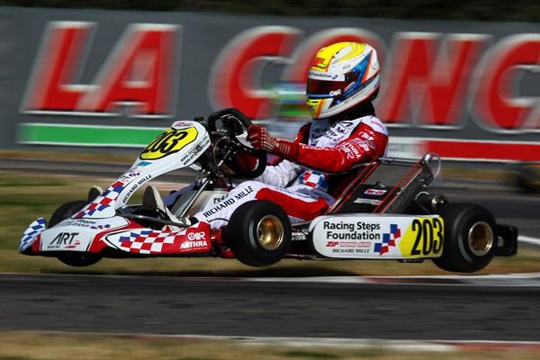 Another successful weekend for ART Grand Prix in the opening round of the WSK Euro Series, held on the Italian circuit of La Conca on March 1-3. The team managed by Armando Filini confirms the top performance in the gearbox KZ1 category this time with its most experience driver, Ben Hanley, and grabs an exciting surprise win in KF category with European Champion Ben Barnicoat.
In KZ1, the winner of the Winter Cup Charles Leclerc had a very fast outing in the official qualifying stopping second fastest time only 19 thousandths of a second short of pole position, while his team-mate Ben Hanley also proved very fast stopping 5th fastest. Saturday’s qualifying heats confirmed the performance of the ART Grand Prix duo, with Hanley finishing 2nd and 3rd with the fastest lap to his credit, and Leclerc 5th at the flag - but sent back to 21st due to a jump start - and 19th in the second heat. The event seemed cursed for both as Hanley dropped down to the back of the field in the first lap due to a contact and managed to finish 16th, while his younger team-mate came back from 18th on starting grid all the way to 8th by halfway through the race, then demoted to 11th. Despite a tough first part of the weekend, the ART Grand Prix camp showed optimism as the pace was good enough to be out front. Sunday morning heats resulted in mixed feelings for Team Manager Filini, as Hanley recovered to finish 7th and 8th, while Leclerc was out in both. In the extremely competitive KZ1 field, the ART Grand Prix duo was in for a fight in Final 2. The Briton managed to move from 8th to 3rd in the first lap, then to 2nd on lap 4 keeping within half a second from the leader for the remainder of the race, putting a mark on the weekend with hi superb drive. Positive finish also for Leclerc, who moved up from 26th on starting grid to 12th by half race distance, to close in 9th.

In KF, the star of the day was 2012 KF2 European Champion Ben Barnicoat. With an unexpected win in Sunday’s final, the British driver starts to get the goods of the incessant development work undertaken by the ART Grand Prix team at the start of the season. And Ben’s pace was shown already in the heats, where the champ grabbed one win and two 2nd places, ruined by the retirement in the other which forced him to start the prefinal from 10th. The young Brit had a good run at his opponents in the 16-lap prefinal that saw him close in 4th place with fastest lap to his credit, later advanced to 2nd following penalties to two of his direct rivals. The Final was a masterpiece, as Ben jumped to lead early on, had a race-long scrap with Boccolacci and ultimately had the better of him with a breath-taking last-corner pass.
Improving performance also for Thiago Vivacqua and Valentin Moineault, both through to the final stages, with the Brazilian able to get 2 points in prefinal.

Work in progress in crash-packed KFJ category for ART Grand Prix Factory Team drivers, none of them able to reach the final. Best performance for ART Grand Prix colours in the class came from Tuomas Haapalainen of ART Grand Prix Finland satellite team. The young Finn scored 3 points in the first prefinal, and made it to the final where he moved all the way to 6th in the early stages but got shuffled to the back of the field as a result of contact.


Armando Filini (Team Manager)
“We had a fantastic end of the weekend, but what a tough event did we have! The premise was anything but encouraging, particularly in KF where even our most experienced driver Barnicoat had an excursion and bent a chassis. Thankfully he made up and finished in great style. Big part of the credit goes to him and to our tuner Machac, they both did an outstanding job.
We continue to suffer in KFJ, our drivers need to make more experience but we are very happy for the performance of our equipment... Haapalainen showed how competitive it can be. As part of our support strategy, Barnicoat will jump back in the KF3 in a special test in Alcaniz the weekend prior to the next race in Zuera to show our Junior drivers where to improve.”

Ben Hanley (KZ1)
“The team made a huge effort to overcome the difficulties over the weekend in La Conca and the top results in KZ and KF demonstrate it. The competition level gets higher and higher at each race and it’s never easy to get the result one deserves. Plus, when you get a bad result as a result of a race contact – as it happened to Charles - it’s difficult to make up for it, but what’s important is that the speed is there, and we have to continue working hard for the next race.”

Ben Barnicoat (KF)
“What a day! On Sunday warm up I crashed and I thought that may have been it, but then took second in the prefinal, had a hard fight for the lead in the last lap of the final and won! Such an amazing feeling! Massive thank you to all of the guys at ART Grand Prix, the Racing Steps Foundation for being such a great sponsor, TM Racing, Machac Motors and also to McLaren. They all played their part in this crazy day! Thank you so much.”