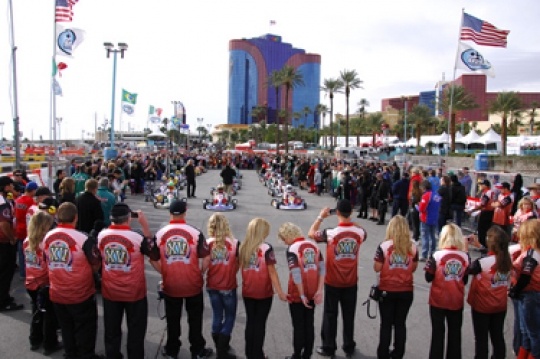 Press Release by: MAXSPEED GROUP INC.
The 2013 season is going to be a big year for the sport of karting in the United States. The month of November will be a celebration of sport, for certain, as two of the worlds largest and most prestigious events are set to take place on US soil over a span of three weekends.
The Rotax Grand Finals will make their first trip to the United States this fall and will take place the week before the country's biggest event, the Superkarts! USA SuperNationals. Two of the most unique and exciting cities in the United States – New Orleans and Las Vegas – will provide the backdrops for what will be a memorable two weeks in the sport, ranging from the history and stories from Bourbon Street, to the bright lights and big dreams of the 'Strip'.

It is with extreme excitement that the staff at Superkarts! USA announces the addition of a new program at this year's SKUSA SuperNationals. Working in cooperation with MAXSpeed Group and the United States Rotax Max Challenge, and with a focus on promoting a celebration of karting in the fall of this year, SKUSA is officially announcing the addition of the Rotax Junior and DD2 classes to the SuperNationals XVII class line-up this November. SKUSA has also confirmed that they will be awarding the sport's first tickets to the 2014 Rotax Grand Finals, as the winner in both the Rotax Junior and DD2 classes will win positions on their respective national teams for next year's race.

"I'm proud to say that Richard Boisclair (MAXSpeed) and I have been able to develop a solid working relationship over the past year, one that is based on mutual respect for each other and for our individual business goals," offers Tom Kutscher, SKUSA President. "Considering that fact that we both believe in our products and want to see the sport of karting grow, there are obvious benefits for everything and everyone involved, from SKUSA and Rotax to our collective racers and the industry, including the shops, the teams and all the mechanics who support our level of competition."

Rotax racing is no stranger to the SuperNationals. The FR125 engine has been permitted in the TaG Senior and TaG Master categories for a number of years. In 2007, Rotax Senior and Rotax Master classes were offered as part of the SuperNationals, won by two-time Rotax Grand Finals winner Pier-Luc Ouellette and reigning SKUSA Pro Tour TaG Master champion Paul Bonilla.

"It's an exciting time for karting in the United States and for us at MAXSpeed," added Richard Boisclair, MAXSpeed Group President. "Hosting the 2013 Rotax Grand Finals is an honor, and we hope to promote the United States well during the week of November 13-16, welcoming racers from all across the world. Our connection with Superkarts! USA and the SuperNationals is something that I've always wanted since I started in karting. I attended the SuperNationals last year for the first time, and now I understand what the hype is all about. Tom Kutscher and his staff put together a first class event. He also understands what the Rotax Max Challenge is about, and the addition of two Rotax categories to the SuperNats is great for the sport in general. I hope to see many North American karters in New Orleans watching the best in the world racing before they head to Las Vegas the following week."

With the scheduling of the 2013 Rotax Grand Finals in New Orleans for the week immediately prior to SKUSA's annual Las Vegas spectacular, roughly 270 drivers from across the globe will travel to the United States. Another 500 drivers are projected to compete once again during the SuperNationals XVII a week later, making the United States the hotbed of karting for those two weeks in November.

This year's edition of the SuperNationals will once again be the final event of the Superkarts! USA Pro Tour. This year's schedule will mirror that of 2011, as the SpringNationals will be held at the Musselman Honda Circuit in Tucson, Arizona on April 12-14, while the SummerNationals is set for a return to the Grand Junction Motor Speedway on July 19-21 in Colorado. With roughly 40 days left until the program kicks off the 2013 season, Superkarts! USA will be releasing more information regarding the SpringNationals in Tucson in the near future.

To follow updates on Superkarts! USA, the SuperNationals XVII, and the 2013 SKUSA Pro Tour, be sure to visit www.superkartsusa.com , as well as on Twitter at @SuperKartsUSA and at Facebook.com/SKUSA.