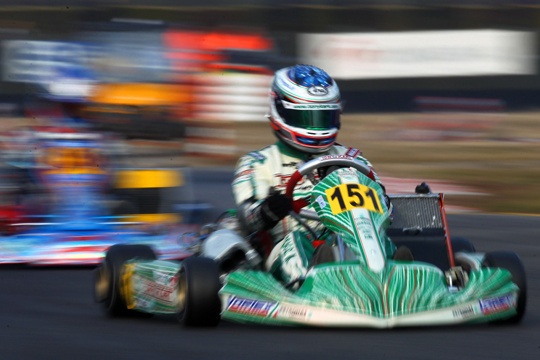 Press Release by: Tony Kart Racing Team
The 18th edition of the Winter Cup, held as in the tradition at the South Garda Circuit of Lonato was not so lucky for our Racing Team.

In particular Marco Ardigò running for KZ2 category had to give up the fight for the success three laps before the finishing line. He was in second position very close to other rivals when he was “pushed” in a spin by a rival (who was later penalized for this accident) and thus lost his chance to succeed in the final step of the competition. In KF category our drivers Basz (6th) and Sargeant (12th) had to perform a very hard recovery both in the pre-final and in the final since they were involved in a few accidents during the heats. On the other hand Andy Chang showed a very good performance (8th) running in the first positions and won one heat and one eight place at the finishing line. In KF Junior category, Betsch lost his opportunity to gain a good result at the second lap of the prefinal, because of a little accident he had been involved into, innocently. Finally, the success in Junior category was reached by a Tony Kart-Vortex chassis, thanks to the very good performance of Alessio Lorandi, driver of the Baby Race private team.

KZ2. The best driver of the heats is Marco Ardigò, able to gain twice a fourth position and once a second place. Rick Dreezen is ninth, Mirko Torsellini takes the fifteenth and Flavio Camponeschi has to start from the back because of an accident that forced him to stop in the second heat. In the prefinal Ardigò ends seventh, Torsellini ninth and Dreezen twelfth. But is Camponeschi who runs a spectacular competition recovering from the last row to the fifteenth position, signing record timings with a best lap of 41.478.
The final was as much exiting as unlucky; actually Dreezen before and Torsellini after, have to stop due to accidents occurred to other drivers, which have  penalised our two drivers. Camponeschi too must stop for a banal damage to the accelerator cable at the eleventh lap. It’s Ardigò now who has to defend Tony Kart Racing Team’s colours fighting for the victory with strong determination. Our driver, after a very good start jumping him to the second position, in the middle of the competition runs quite carefully, between the fourth and fifth position. At the end, on a slightly wet asphalt, Ardigò enters the fight against Le Clerc, Hanley and De Conto. The outcome is our driver pushed off the track, leaving aside the chance to succeed.

KF. Our materials’ competitiveness is once more confirmed thanks to the very good performance obtained at the South Garda. We missed the podium unfortunately, but the results obtained make us look at the future events with optimism. It’s Andy Chang’s success highlighting the heats, actually after a very good training in our Racing Team, Andy Chang ran a high-level competition. He ended with a eight position, not so far from his teammate Karol Basz. This last driver had to recover both in the prefinal and in the final because of some collisions at the starting grid, which made him lose ground. Basz could fight from the first to the last lap, testing his material. But his sixth position in the final as well as his best lap of 43.023, do not give the right idea of the potential of our driver from Warsaw.
The US driver Dalton Sargeant had to run the whole final in order to recover from two unfortunate events occurred during the heats. Sargeant asserted himself within the fight, recovering from the back positions at the prefinal starting grid to the twelfth position in the final. Just to better understand the great value of our products, it is enough to have a look at the final ranking where not less than six chassis, in the top-ten list, have been manufactured in our factory.

KF Junior. The young driver Alessio Lorandi, of the Baby Race team, after the very good start on the occasion of the WSK Master, once more succeed conquering also the 18th Winter Cup. Lorandi ran in the whole weekend without considering any rival in front of him. In the cadet class drivers running a Tony Kart chassis powered by Vortex engines, conquered top positions, confirming the high competitiveness of our material. The competition of the young driver Mick Betsch was positive until the first part of the pre-final, when at the second lap, our driver was bumped and hit by a rival. Betsch, independently from the pre-final incident, could confirm his very potential during the heats, gaining twice the second position and once the third one.