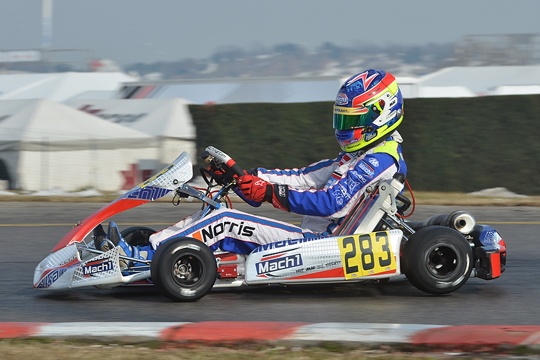 Press Release by: Mach1kart
Four drivers started for the German Chassis manufacturer Mach1 Kart at the 18th Lonato Winter Cup and were once again able to impress against the backdrop of a strong international setting. Factory driver John Norris finished the turbulent weekend on 14th place of the KF2 class.
The Winter Cup started excitingly for the reigning German vice champion. On Monday and Tuesday prior to the racing weekend, Kart racing had not been possible. Heavy snowfall transformed the South Garda Circuit into a wintery landscape. On Wednesday, the weather had cleared up a bit though and the first free trainings could take place on the wet tracks. They did so without factory driver John Norris though – he was battling a heavy flu and was trying to get well. Not yet fully recovered, he then started in Friday’s qualifying and immediately experienced a disaster. Electronic difficulties caused him to only be able to roll along the track, making him come in next to last among the KF2-field consisting of 84 drivers. But there was no sign of surrender: Norris proved his driving qualities and the possibilities of his Mach1 racing materials throughout the following five Heats. During a great catching up race, he fought his way through the top-class field and, despite his flu, ended up entering the big final on the remarkable 20th place Saturday evening. “John has shown an unbelievable performance throughout the past two days. Not just anyone could have fought his way from the end as far to the top as he did”, praised team leader Martin Hetschel his protégé.
Everything did not go according to plan during the pre-final on Sunday though. He had to quit the race due to an accident after only three laps. He was able to repeat his performance of the previous day though: during the final, he fought his way through the field by driving great times and just barely missed placing in the top ten by coming in 14th. “I don’t even want to imagine where we could have ended up under perfect circumstances. Our Chassis’ new stage of extension has worked very well and I’m already looking forward to the season 2013”, continued Hetschel.

In addition to Norris, rookies Julian Müller, Swiss Marco Forrer as well as junior Nicolai Hagenaes from Norway were able to gain first international experiences. All three of them were able to improve their performances throughout the course of the four racing days, but had to face the severity of such a top-class event during the races and in the end had to travel home early, after the Heats. “The three had to jump in at the deep end. Starting from midfield, it is always a game of luck to finish the race without an accident. All of them can be content with their performances nonetheless,” reports Martin Hetschel.

The team’s next race will take place in two weeks. A double task awaits them: While some drivers will start at the second round of the Kerpen Winter Cup, John Norris will attend the start of the WSK Euro Series in La Conca.