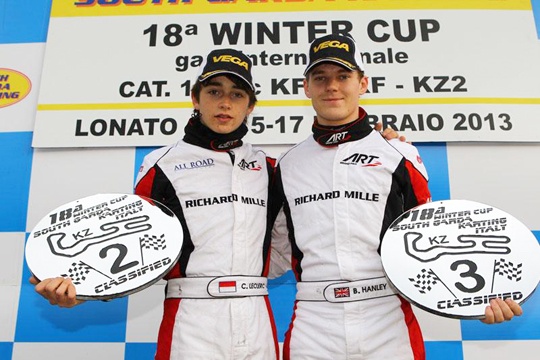 Press Release by: Art Grand Prix
In one of the coldest Winter Cup editions to date, the Factory Team managed by Armando Filini took on the South Garda Circuit in Lonato (I) with all its top drivers, and a whopping 23 ART Grand Prix chassis in the three categories - 3 in KZ2, 12 in KF, 8 in KFJ - making the second largest contingent of the event. And with Leclerc and Hanley’s 1-2 in KZ2, there was plenty to cheer about also for ART Grand Prix CEO Nicolas Todt, present in Lonato to support his team and drivers.
Despite lining up only 2 drivers in the gearbox KZ2 category, the ART Grand Prix Factory Team had a superb outing with Charles Leclerc and Ben Hanley hitting an exceptional 1-2 in the final. The heat session also proved the top performance of the ART Grand Prix team-mates, with Hanley clinching 3rd place for prefinal start (3rd, 4th, 2nd in the three heats) and Leclerc 8th (5th, 7th, 2nd). A hard-fought prefinal saw the more experienced ART Grand Prix driver coming less than 7 tenths short from final pole start, while the young talent from Monaco showed great speed and maturity closing in 5th – and missing out on row 2 for the final starting grid by a mere 0.076 seconds - also stopping the 3rd fastest time of the race.
In the partially wet final, no one could predict what was going to happen, as the ART Grand Prix duo was in for a hit! A huge fight ensued between Hanley and De Conto for the lead, but to get the spoils was Leclerc who beat his teammate by 7 tenths at the flag inheriting the win from the Italian, penalized by 5”.

Not as much to celebrate for ART Grand Prix in the direct drive categories. In KF – formerly known as KF2 - ART Grand Prix colours could count on as many as 12 drivers on starting grid, 6 of which of the Factory Team including current European KF2 Champion Ben Barnicoat. However, the difficult qualifying session and a few retirements in the heats compromised the rest of the weekend for Barnicoat, Moineault and Tujula, the three who reached the final stages. From 21st, 23rd and 28th respectively, the three had a tough job ahead as the prefinal got underway. The Briton was the best of the lot closing 12th, the French couldn’t do better than 18th while the Finn had to settle for 24th. The trio find no magic solution in the final keeping positions pretty much unchanged from start to finish.
In KF Junior – formerly known as KF3 – the Finn Toumas Haapalainen (ART Grand Prix Finland) managed to go through to the final stages after an extremely tough qualifying - where he stopped the 62nd laptime - and heat session. Having to go through the second-chance heat, the young Finn made his team proud moving up from the back of the field in the prefinal to finish 15th, and then topping up with a strong performance in the final closing in 7th. Good recovery also for the other satellite team drivers Bonduel and Chaimongkol, who made it to the final despite a troublesome weekend.


Armando Filini (Team Manager)
“The top two positions in KZ2 of Leclerc and Hanley are quite outstanding, particularly because the extreme weather conditions prevented us from carrying out any sort of practice. Thankfully in KZ our equipment performs already very well, so much so that Hanley was the fastest driver during the heats. Instead, in KF we tried our best to be ready for qualifying, but we are still in search of our 100%, which is well nigh impossible to find without the use of free practice sessions. Overall a very good performance of the ART Grand Prix boys, including the brilliant comeback by a fever-struck Haapalainen in KFJ.”

Charles Leclerc (KZ2)
“What an amazing week-end! Winning the Winter Cup in KZ2 was just amazing, one of my dreams came true! And to be in front of these drivers, so happy! After the first round of the WSK Master Series in La Conca I knew we had a great potential. Everything just worked out perfectly in Lonato.
Thanks so much to Tm Racing Engine, ART Grand Prix, All Road Management, Formula Medicine and Richard Mille!”

Ben Hanley (KZ2)
“The team worked very well all weekend. The equipment performed really well, we are building up from what we’ve done last year and we are naturally starting to get the results we deserve. In the final I was in for the win, I tried to overtake for the lead with a couple of laps to go but came together and got passed by Charles. A 1-2 for ART Grand Prix is a superb result!”

Ben Barnicoat (KF)
“The weekend was somewhat difficult. After a tough qualifying where we were still looking for some speed, someone drove over me in one of the heats and I ended up with a poor starting position for the pre-final. We then made some changes to the engine for the final and it was a lot better. We have to carry on with development but we’re surely getting there.”