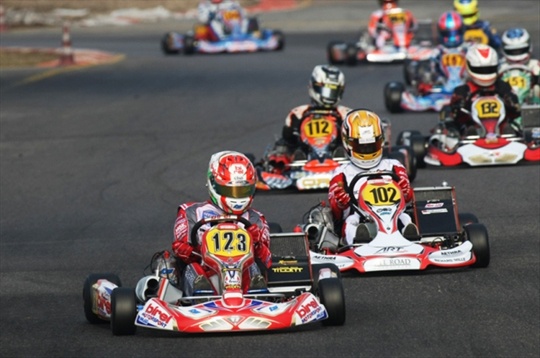 Press Release by: Birel Motorsport
18TH WINTER CUP, LONATO 17 FEBRUARY 2013
After dominating qualification stages, as well as Pre-Final and Final, a contact relegated the driver from Veneto back in 6th place. Positive weekend in KF classes, too.

Bitter-sweet end for Birel colours at the 18th Lonato Winter Cup weekend: definitely positive performance wise, yet disappointing because of the penalty given to Paolo De Conto, the winner of the hard-fought and spectacular KZ2 Final. The supremacy of the Treviso-born driver in shifter category was clear from qualification stages on, in which he achieved 2nd time behind teammate Kozlinski, plus three victories in the elimination legs.

The excellent degree of competitiveness of the Birel –Tm combination was not altered in Pre-Final either, when the driver from Treviso won preceding  Hanley and Negro and, above all, was strengthened in the Final, with  De Conto challenging  Hanley, Leclerc and Ardigò and gaining the lead. However, unfortunately, a slight contact right with Ardigò in the final laps  (when it was also starting to rain over the Lombard circuit)  induced the race management to penalized him with  5", retrograding him back to 6th place in the final, hence awarding  Leclerc with the KZ2 victory.

Such action caused bitterness in  Birel team, as stressed by  Paolo De Conto himself: "Two simple reasons make the action taken against us particularly upsetting: the first is the fact that it was a normal race contact occurred while racing a bend, and not while approaching one, which may have had implied a degree of voluntariness; the second reason involves the fact that it was the only penalty given throughout an event during which contacts did  not run short in virtually all categories and, talking about KZ2, several even affected our team, with my teammate Toninelli even having to race the make-up after being penalised by as many as three accidents in the elimination  leg without any responsibility being investigated.
Sadly this type of competitions cannot count on the same technology tools used in WSK or in CIK, so the only thing we can do is accept this kind of verdicts, as they are part of the rules and of the general context. Luckily what we were really interested in was highlighted by the scores, I mean the brilliant performance by our chassis and TM motors, factors which place us at KZ class top in the early season and keep expectations high awaiting the upcoming international appointments”.

Also Kozlinski’s results contributed to the good KZ outcome, with pole position in timed practice, disadvantage caused by a contact in Pre-Final, and a great Final finished in 7th place. Also Roberto Toninelli was pretty speedy despite recovering from the “make up” race, where he had ended up after being involved in three accidents in the leg: he closed the Final 11th with average speed equalling that of the best.
The scuffle affected ranking also in KF, to such an extent that George Russell had to set off from 22nd place on the grid in Pre-Final, after experiencing as many as three contacts in the 5 elimination legs. Same story for Vigorito, who did not even reach qualification and, in Pre-Final, for Baily, who went off track as early as in lap 1. Whereas, in the Final, won by Verstappen, the Belgian managed to secure 16th place and Russell classified 9th.
Also RK colours showed off in KF class with Paolo Ippolito’s fantastic race (5th place). Finally, Aubry, twice successful in KFJ elimination legs, greatly represented  Birel-TM but then, after a grand Pre-Final start-off, the scuffle and a contact in the first laps pushed him back beyond 15th position, not letting him get further than 12th on finish line. Therefore he needed all his determination to improve his ranking in the Final, where he succeeded classifying 6th (race won by Lorandi).

The records of the 18th edition of the Winter Cup report “official” Birel and Tm colours competitive in all classes, together with top performance for RK team and BMB motors. The next International karting appointment is scheduled on  3 March at Muro Leccese circuit with WSK Euro Series 1st round.