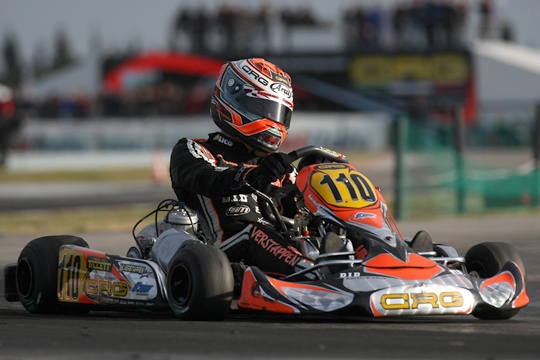 Press Release by: CRG
After The Success In KZ2 In The Wsk Master Of La Conca, Max Verstappen Takes Part In The Kf Category Of The Winter Cup. In Lonato With Crg In KZ2 Federer And Muller. Fore’ Races With The Polish Team Dtk. Great Expectations In KF And KFJ With The Private Teams Forza Racing And LH.

Lonato del Garda (Brescia - Italy). After the opening event of the season - the WSK Master Series of LaConca - CRG is ready to face the second appointment and, this time, on the racetrack South Garda Karting of Lonato del Garda for the 18th edition of the Winter Cup.

An important event for the All Black team, not only for the importance of the race in itself, but also because it is the right occasion to find the ideal setting of the equipment for the forthcoming international championships.

VERSTAPPEN AT THE START IN KF.  On this occasion, CRG official team has concentrated its presence in the KF category with a group of excellent drivers, starting with the young Dutch driver
Max Verstappen: after dominating in KZ2 in the last race in La Conca, this time he committed himself in the category without gearbox where, once again, he is the favourite.

Together with Verstappen also the Finnish Niclas Nylund, who had already made himself conspicuous in La Conca, as well as the Canadian Zachary Claman DeMelo, definitely at his ease in KF after last year's apprenticeship in KF3.

At the start in KF also the Brazilian Vitor Baptista and the French Ingrid Girard,  who begin another promising season with CRG right in the Winter Cup.

READY TO THE BATTLE IN KZ2. In KZ2 Fabian Federer represents CRG official team with the new engine Modena Engines, which was already successfully used for the first time by the Italian driver himself in La Conca. In this race, directly assisted by CRG, also the Austrian Marcel Muller, while with the Polish team DTK Racing there is, occasionally, the five-time world champion Davide Forè side by side with Bartosz Idskowski. Among the many private drivers racing with CRG equipment also Andrea Dalè, well motivated to do a great performance on his home racetrack.

YOUNG DRIVERS TO THE LIMELIGHT. Among the  young drivers of the KF Junior, CRG will be represented by the private team Forza Racing with the Russian Robert Shwartzman.

In KFJ there are great chances for the satellite team LH Racing, with the Swedish Matteo Raspatelliand Niko Kari. With LH in KF2 there are the other Swedish drivers Kevin Rossel, Igor Walilko, Johannes Heinonen, Jussi Kuusiniemi and Pedro Hildebrand.

PROGRAMME. The programme of the weekend of the 18th Winter Cup of Lonato has in schedule on Friday 15th February the beginning of qualifying from 10.50 am, while heats start from 12:50am and will continue throughout Saturday. On Sunday 17th the final phase for the three categories KFJ, KF and KZ2, with Pre-finals from 01.30pm  and Finals (with prize-giving ceremonies) from03.00.