Author: Vroomkart International
Another great issue is ready for all our international readers. One of the latest homologation most interesting chassis, the Maranello RS-8, made the cover. Our track test unveils all details of this unconventional model. Also, we wrap up the Exhibition Shows interlude with reports from Offenbach, Birmingham and Orlando. Plus, Measuring ports and Camber set up technical articles, and a close-up on Severi’s SGM 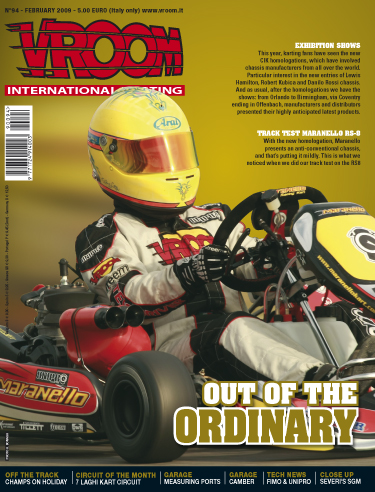 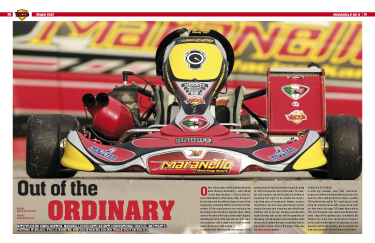 TRACK TEST – Maranello RS-8   With the new homologation, Maranello presents an anti-conventional chassis, and that’s putting it mildly. This is what we noticed when we did our track test on the RS8 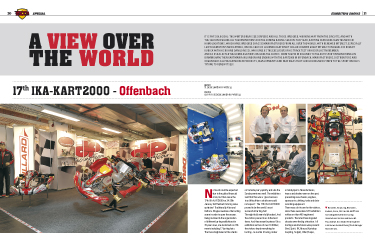 SPECIAL – Exhibition Shows   It is physiological: the winter break sees drivers and all those involved, working way from the circuits, and with the season we have all the innovations for the coming racing season. This year, karting fans have seen the new CIK homologations, which have involved chassis manufacturers from all over the world, with renewed interest, especially Lewis Hamilton’s new entries, whose chassis LH homologation by Crg has drawn great interest on behalf of Robert Kubica with his RK and Danilo Rossi, who gave us the exclusive of his track test on his DR last November.
And as usual after the homologations we have the shows: from the PRI in Orlando to the Autosport International in Birmingham, then Kartmania in London and ending with the KART2000 in Offenbach, manufacturers, distributors and organisers all presented new products, developments and new ideas that should bring new lymph to the sport which is trying to renew itself. 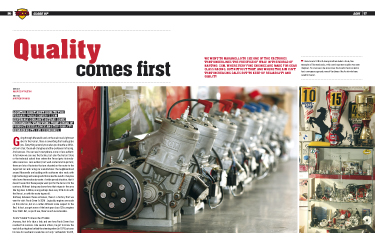 CLOSE UP – Severi’s SGM   Located right next door to the Ferrari, Paolo Saveri’s SGM certainly couldn’t betray some mechanical traditions that speak of product excellence and top quality regarding its 125 cc engines. 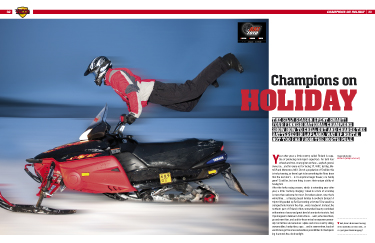 OFF THE TRACK – Champions on holiday   The silly season spent smart! Four Finnish national champions show how to chill out and charge the batteries in Lapland, way up north, not too far from the North Pole. 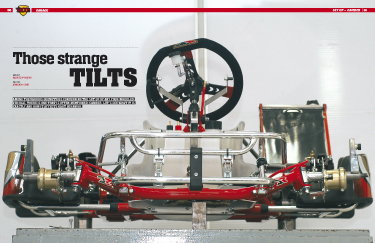 GARAGE – Camber Set up   Among the various geometries concerning the set up of any four-wheeled vehicle, there is one that is often mentioned: camber. Let’s see what it is exactly and how it affects kart behaviour. 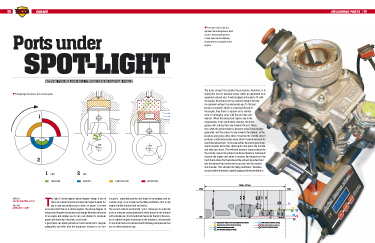 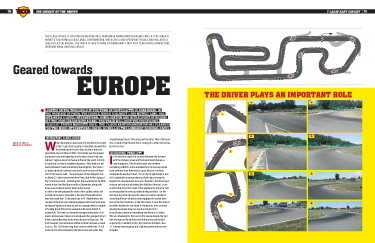 CIRCUIT OF THE MONTH – 7 Laghi Kart Circuit   Located on the threshold of the town of Castelletto di Branduzzo, in the province of Pavia, the course, which is almost 1,300 metres long, has obtained a C level international homologation and in the spirit of kicking off the 2009 season with a bang, the track will host the prestigious “classic” Trofeo Margutti race.  The 7 Laghi Kart organization has planned for two more international races, as well as two Lombardy regional races. 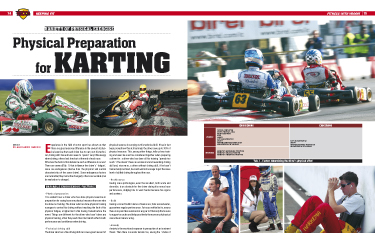 KEEPING FIT – Physical preparation   Experience in the field of motor sport has shown us that there is a great exercise difference in the amount of physical exercise that each driver has to carry out his technical, driving skill. Some drivers seem to “spend” very little energy when driving, others look tired out at the end of each race. 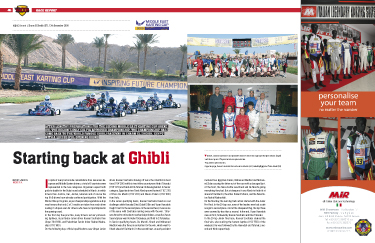 RACE REPORT – MEKC Rnd.1   After lengthy preparations for the second Middle East Karting Cup (MEKC 09), the region’s only CIK-FIA approved championship, the championship has come back to the world famous Ghibli Raceway in Sharm el Sheikh, Egypt with a successful opening round. 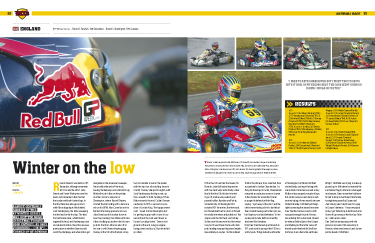 NATIONAL RACES   A bit of national racing is more than welcome, and many drivers have taken the opportunity to take some of the Christmas rust away. In the UK, the KF Winter Series has seen some of the protagonists of the 2009 busy at Rowrah and Shenington, while in Denmark, top guns like Thonon, Catt and Guignet took part to the SuperStars of Karting held indoor. From the USA, the WKA stopped at Daytona with Aussie David Sera dominating the weekend.


COLUMNS – Mondokart, Tech News and 2009 national and CIK calendars   The News section opens with the latest from the Chicago Sodi Kart Expo, and the announcement of the new BRDC International Series dates. Former F1 and Nascar driver Max Papis will race in the US with his ‘Papis Racing with Fittipaldi’ Karting Team supported by Birel; J3 Competition leave a mark in Florida Winter Tour weekend; while US Stars of Karting announce a new format for the 2009 series. From Belgium, the 2009 Belgian Karting Championship is taking shape; and a 1961 Italkart Zoom is restored to perfection.
As we approaching the start of the racing season, nothing is more useful than the racing calendar. This issue features the most important dates, nation by nation for the entire 2009 season, and the updated CIK-FIA calendar, which includes the main single-make series.
Our brand new Tech News section presents two very interesting products: Fimo Lubricant, and the Unilog by Unipro.