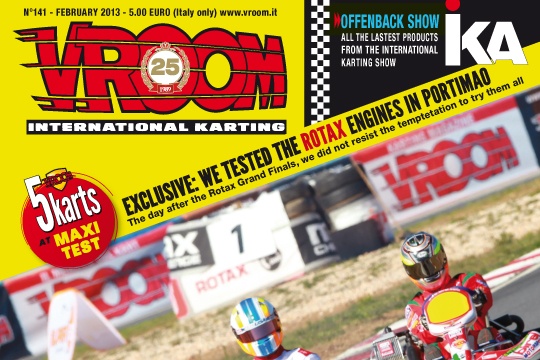 Author: Vroomkart International
This has truly been a titanic effort. Five different karts, five different engines, one day at the circuit. We are talking about the gigantic Rotax Max range Track Test we realized in Portimao the day after the Grand Finals. Thankfully, we could count on four special test drivers next to our own Voltini, a glorious sunny day, and the invaluable help from the man in charge of developing and testing Rotax engines and components Darrell Smith. Result: 21 exclusive pages of Rotax as you’ve never seen it before!
FROM THE EDITOR
In the nature of karting
Here we are. As always at this time of the year, with the end of year celebrations  over, reward for what seemed a never-ending season, in the coldest time of the year, karting starts to pulse. It seems a contradiction, maybe it is, because we cannot imagine a vision that would promise God knows what aims. Expectations are always the same: that karting picks up, brings back the numbers and springs to life.
To tell the truth, you can feel something stirring, maybe because as always, it is at this time that the attention increases and we are all hoping that this year things will change. Maybe it is because it is at times like these more than others that you do feel the fermentation, like water about to boil, like an object in movement, as seen in Lonato, where every day wheels are craving to spin as they prepare for the new season, which is about to start.

So, as I have already said in the editorial for the Italian edition of Vroom, at this time of the year, one always makes guesses as to what regards expectations for this motorsport. On this occasion, I’d like to underline that in making forecasts, and/or giving some futuristic vision, the usual comments might seem futile and therefore not appropriate. You see, today, year 2013, hope - the anchor to which everyone has been holding on to in one way or another (wishing) over these past 3 years - can no longer be a moral support, it is no longer plausible. The fact that karting is once again producing interest, first and foremost for fans, simply cannot depend on fate: it is like believing in a blessing falling from the sky. We are all aware of the reason why we have got to this stage, and Italy, for example, as reference light house that once was, it has now been reduced as a rear light of the international movement. However, I have the feeling that something is happening in Italy, in Europe or in the world. Maybe, who knows where, there is the magma, which is boiling and ready to explode, surprising everyone like when you watch a volcano erupting.

The time has come to change the tune. To look ahead proving to be ready and participate to a rebirth. Because the success of this motorsport depends mainly on people who can see its potentiality. Like those at Rotax, for example. They have seen it first, and for a long time they have seen what karts could offer. It is thanks to them if karting fans today can make the most of this opportunity. Fifteen years have passed and this formula is still very important to allow karting to maintain its breeding role and its ability to promote karting and kart racing throughout the world..
This is why we must look ahead with good hopes. When a project is well done, with clear goal and intent like the Rotax Max project, no crises can disturb such enthusiasm. The international breeding ground keeps on boiling and when we least expect it, it will explode … It is in its nature.
Giuliano Ciucci Giuliani 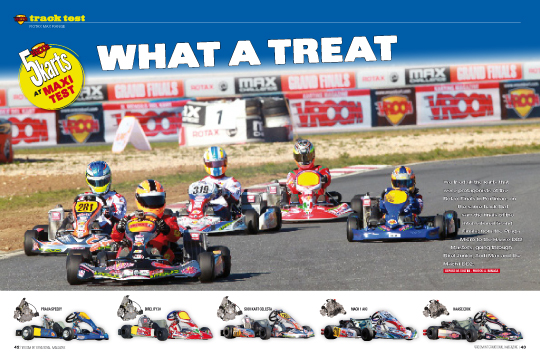 TRACK TEST – Rotax Max range
We tried all the karts that were protagonists of the Rotax Finals in Portimao, on the same track that saw the finals of the international Grand Finals; from the Praga Micro to the Haase DD2 Masters, going through Birel Junior, Sodi Max and the Mach1 DD2. 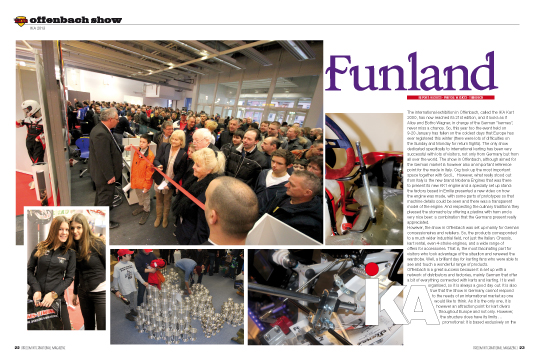 OFFENBACH SHOW – IKA 2013
The international exhibition in Offenbach, called the IKA Kart 2000, has now reached its 21st edition, and it looks as if Alice and Botho Wagner, in charge of the German “kermes”, never miss a chance. So, this year too the event held on 19-20 January has fallen on the coldest days that Europe has ever registered this winter (there were lots of difficulties on the Sunday and Monday for return flights). The only show dedicated specifically to international karting has been very successful with lots of visitors, not only from Germany but from all over the world.

IN MEMORY OF – Lotta Hellberg
No, we haven’t forgotten her. Lotta is still in our hearts even though few years have gone by since we last featured her in Vroom. On 11th February it will be 8 years since Lotta Hellberg passed away, killed by a dreadful disease. She was only 34 when she left us, and I cherish very dear memories of her...

CLOSE UP – CMC
Karting has never looked so fantastic before. In 2012, the CIK commissioned the production of video material to CMC of Ben Constanduros, son of legendary Formula 1 track commentator Bob Constanduros. And the CMC crew did an amazing job, giving new meaning to kart races broadcasting on TV networks as well as introducing the very successful Live Web TV broadcast.
We had a chat with CMC owner Ben Constanduros and Producer Natalie Tomsett to get a balance of their 2012 CIK experience.

FROM KARTING TO F1 – Robin Frijns
Here we are once again talking about an ex-kart driver that moves on to Formula 1. Robin Frijns, from Holland, one with a heavy foot chosen by Vroom to step into single-seaters a few years ago, has recently made the headlines after taking up the position as third driver for Sauber Formula 1 team for the 2013 season. 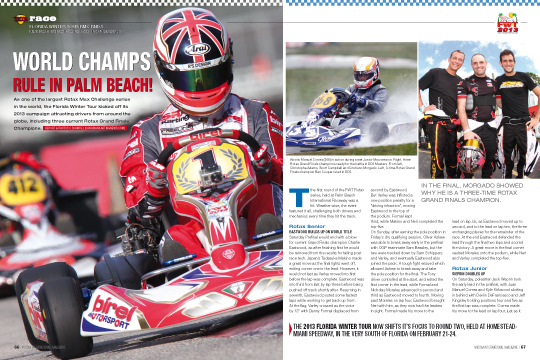 RACE REPORT – Florida Winter Tour Rnd.1
As one of the largest Rotax Max Challenge series in the world, the Florida Winter Tour kicked off its 2013 campaign attracting drivers from around the globe, including three current Rotax Grand Finals Champions. 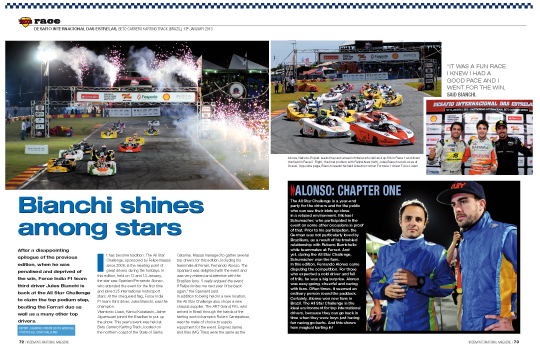 RACE REPORT – Desafio Internacional das Estrelas
After a disappointing epilogue of the previous edition, when he was penalised and deprived of the win, Force India F1 team third driver Jules Bianchi is back at the All Star Challenge to claim the top podium step, beating the Ferrari duo as well as a many other top drivers.

SPECIAL – Engine homologation 2013-2021
Let’s see what’s new for the forthcoming engine homologation period, however some manufacturers have just decided to develop their engines further, especially those for KF classes, therefore, we find more innovations in the gear class.

CLOSE UP – Modena engines
They say, and it’s probably true, that Italy is the land for dreamers. And, in Modena dreams are all based on wheels, pistons, speed and competition.

GARAGE – Spark plugs
A simple element that is highly technological, fundamental for an engine if you want it to work: a spark plug, it is always better to look after it properly. Let’s see how.

VROOM VINTAGE USA – The Big One 2012
Vintage karts and the events organised to celebrate the glorious endeavours of the past are getting increasing popular, mainly due to the raw, essential beauty of such racing machines. Rob Voska and Bob Kurkowski, the principals of REAR, are the organizers of The Big One, an event dedicated to karts and engines of American manufacture raced from 1956 to 1972, now at the 11th edition.