MAXSpeed Group, Rotax distributor for the USA and 2013 Rotax Grand Finals organizer, has announced the Micro & Mini Invitational race as a support event. Only 34 Micro and 34 Mini Max drivers will be invited to compete. Due to international regulation, these classes will only be open to WKA and Canadian licensed drivers.
Details for qualification will be announced before March 1st.
The US Rotax MAX Challenge Administrator, Josh Smith, had this to say about the announcement, "With the Grand Finals coming to the United States in 2013, this was our opportunity to bring the entire Rotax family together. In doing this, we are creating an environment for the youngest drivers in the North American Rotax community to experience firsthand an event that is truly unique in the world. With the presence of these two additional categories, NOLA Motorsposrts Park will host 356 drivers for the Grand Finals. This will be the highest level of participation in the history of this event!"


On a different note, for the second year running MAXSpeed Group has been confirmed as BRP Distributor Of The Year for 2012. BRP-Powertrain used six key criteria in areas such as sales volume, productivity and professionalism to evaluate each distributor's performance. MAXSpeed Group was able to excel in every area for a perfect score.
Richard Boisclair, President of the MAXSpeed Group, was understandably excited with the announcement, "To win this award last year was very special because it was our first year as the U.S. Distributor. This year, it's even sweeter because it shows the system we've put in place could be sustained. I want to thank the entire MAXSpeed team for their efforts and for their commitment to the goals that have led to retaining this honor."

Helmut Voglsam of BRP-Powertrain (Rotax) stated, "We could not be happier with the performance of the MAXSpeed Group. We knew they would bring a new energy to the Rotax market in the United States. But, to achieve our coveted Distributor Of The Year award in their first two years of operation, while doing all the steps necessary to be awarded the Grand Finals for 2013, is beyond all of our highest expectations." 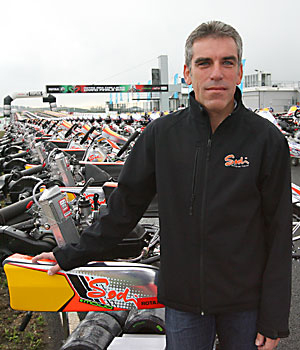 Finally, as already mentioned in the exclusive interview to Richard Boisclair published in Vroom January issue, MAXSpeed has welcomed well-respected professional Thierry Germanovitch as Brand and Marketing Manager. Thierry brings over 30 years of experience both on and off the track to the team headquartered in Deerfield Beach, Florida. Thierry’s duties will be focused on working with the Rotax Dealer Network across the USA to assist them with their Rotax and Mojo line of products. Additionally, Thierry will be in charge of promoting and running the 2013 Rotax MAX Challenge Grand Finals. This single event, he believes, has now become the most significant karting race in the world.

“It is really fantastic for me to be here. Today, I have the chance to work for a company that has many ambitions and who is the importer of the best ever brand in the karting market,” said Thierry.“Richard Boisclair is an amazing person and he has surrounded himself with a team that is already today a united family enjoying a maximum motivation. I hope to bring all my experience to this team very quickly and allow him to reach ever higher goals.”

Richard Boisclair was very excited to have Thierry come aboard, “Thierry’s knowledge of the racing world combined with his experience in key marketing areas makes him the perfect to run the 2013 Grand Finals in New Orleans. We are very blessed to have someone as high in stature as Thierry Germanovitch on our growing team.”

To keep up to date visit www.gorotax.com or join the official Facebook page at www.facebook.com/GoRotax