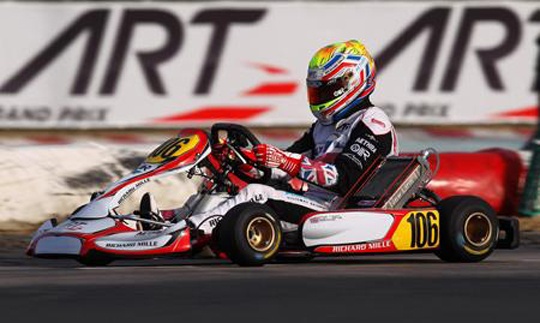 The ART Grand Prix Factory Team had its first outing of the season at La Conca International Circuit for the WSK Master Series opening round.

The team managed by Armando Filini fielded as many as seven drivers in the three CIK categories, starting with two novices from South America Diego Borrelli and Sérgio Sette Camara in the KF Junior category. Current European KF2 Champion Ben Barnicoat was joined by Valentin Moineault and Thiago Vivacqua in KF, while veteran Ben Hanley had a new ally in KZ2, current WSK Euro Series KF2 Champion Charles Leclerc at his debut in the gearbox class.

The gearbox category saw the debut of Charles Leclerc next to veteran Ben Hanley. The ART Grand Prix duo showed all its competitiveness already in the early stages of the weekend, with Hanley posting 2nd fastest and Leclerc 6th fastest time in qualifying. Saturday’s finale saw the two keeping the position all the way to the chequered flag, with the Brit shadowing the leader for the entire 16-lap race distance, and the Monegasque moving back and forth from 6th to 3rd and back down to 6th. On Sunday, things changed quite a bit as both drivers were forced out in one of the heats having to start the finale from 13th (Hanley) and 26th (Leclerc). The Brit made a superb comeback finishing 6th as well as posting the fastest lap of the race, while his younger teammate moved up all the way to 10th when he was forced to retire with an engine failure.

In KF category, the ART Grand Prix team had to face some of the best direct-drive pilots in the world. Briton Ben Barnicoat proved once again his worth after the weekend got spoiled by a retirement at the start of the third and final heat while in 4th position. The Brit could nonetheless use his 2nd and 3rd place finish from the previous heats to start the pre-final from 12th, claiming a superb 5th place start for the final after an exciting comeback. The icing on the cake came from his consistent pace in the finale that allowed him to close in 4th and sit 5th in the championship.
Valentin Moineault had to go through the Second Chance heat following a retirement in the first heat, used the pre-final to make up some ground, and closed the finale in 10th following a prodigious comeback from the back of the field bagging 6 precious points for the championship.
Thiago Vivacqua had a similar faith up until lap 7 in the final when swelling rib pain forced him to retire.

The Junior weekend served Borrelli and Sette Camara mainly as a way to get accustomed to the extremely competitive European fields, as the test of the previous weekend had a toll on the youngsters affecting their fitness. Both Borrelli and Sette Camara unfortunately failed to reach the finale in one of the most demanding circuits in the world, but this experience has surely served its purpose.
Worthy of mention is Thailand’s Sasakorn Chaimongkol from satellite team Millennium Motorsport for his electrifying comeback from 19th to 5th in the finale.

Armando Filini (Team Manager):
“Our weekend in La Conca was somehow bitter-sweet. Obviously I’m very happy because we proved once more that the performance is there, as Hanley also set the fastest lap in KZ2 Finale 2. But we had a few technical problems that compromised our chances particularly in KZ where we could have got more than Ben’s Finale 1 podium.”

Charles Leclerc (KZ2):
“It was my first official race in KZ2 and I have enjoyed it a lot. I already did few tests but the race was far more exciting. I still need to make a lot of experience but I am quite satisfied with my debut. Ben was very helpful to understand how to best use the engine, and I’m really looking forward to race at the Winter Cup where I think I can do well.”

Ben Barnicoat (KF):
“It’s not such a bad start to the Series: we know where we need to improve for the next races. The team has done a fantastic job and the chassis was really good. I’m sure that we'll fight for podiums and wins.”