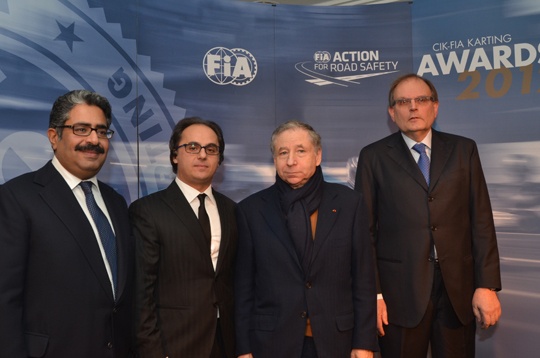 The CIK-FIA World and European Karting Championships have agreed a promotion deal with WSK Promotion to start with the 2013 season. WSK will undertake the task of organising and promoting the CIK-FIA championships, the International Karting Commission (CIK) announced. The announcement was made at the CIK-FIA prize-giving gala on 19 January, when FIA president Jean Todt presented WSK Promotion president Luca De Donno to the 175 guests gathered at Paris’ Pavillon Gabriel.

“This is the first time that the CIK-FIA has had a promoter,” Todt explained. “The fact of entrusting WSK Promotion with the organisation of the World and European Championships constitutes the best choice for the future of karting.”
The news was welcomed by the CIK-FIA administration, which views the involvement of an independent promoter as a boost to the long-term interests of the World and European Karting Championships.
“We can be optimistic for the future of karting,” CIK president Shaikh Abdulla bin Isa Al Khalifa said of the announcement. “The choice of leaving the organisation of the most important events to Luca de Donno will bring advantages to this sport.”
CIK vice president and familiar paddock face Kees Van de Grint agreed. “In our opinion, we have taken the right path,” he said. “This is a positive change, which will produce its first results already during the 2013 season.”