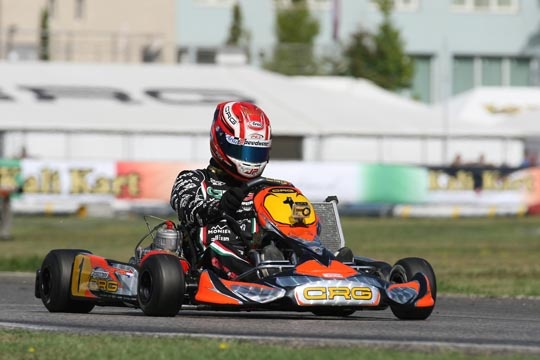 Press Release by: CRG
In the picture: Jorrit Pex,  2012  KZ1 European Champion and winner of the WSK Euro Series in 2012.

On The International Circuit La Conca Of Muro Leccese, The Fourth Edition Of The Wsk Master Series For The First Of The Four Rounds Of The Calendar. Crg Official Team Is Present With Many Protagonists Ready For Great Achievements.


Lonato del Garda (Brescia). The new racing season is already in full swing thanks to the first international round in a rather earlier than usual calendar. At the 3rd February weekend, on the international circuit La Conca of Muro Leccese, the fourth edition of the WSK Master Series, the first out of four rounds of the 2013 schedule.

CRG official team gets on track with an outstanding pack of drivers dedicated right to this international championship. The team is well determined to harvest many good results after the excellent last year's achievements.

In KZ2 the participation of the quick Max Verstappen, on CRG-Tm, stands out. He is determined to achieve a great performance in the gearbox category too, after being one of the protagonist in KF thanks to his victory in the KF2 WSK Master Series. Next to him the 2011 European Champion Fabian Federer, at his debut with the new Modena Engines engine.

With CRG also another great protagonist of last season, Jorrit Pex with the CRG Holland team, European champion of the KZ1 and of the WSK Euro Series. In the team, together with Pex, also the Dutch Sinan Van Der Raad.

Very interesting also the presence in this category  of several drivers of CRG private teams such as Andrea Dalè on CRG-Maxter, or the young Lorenzo Camplese at his debut with the  Galiffa Kart Team,  Kristijan Habulin with KK1, the Russian Philipp Buznikov with the  77 RUS team and  Giuseppe Amodeo with the Gamoto team.

In the KF category, CRG official team presents two important novelties: the Japanese
Fuma Horio, last year's protagonist in the Italian championship, the Finnish
Niclas Nylund, who joined CRG at the end of last season for the WSK Final Cup. In KF there is the debut of the Canadian Zachary Claman De Melo,  after his good last year's apprenticeship in KF3. All the three CRG official drivers will be racing powered by Iame/Parilla engines.

In KF, there is also the remarkable  LH Racing team with the Danish Kevin Rossel and the Polish  Igor Walilko, with LH chassis (brand of the CRG group) and Iame/Parilla engines. The LH Racing team is also in the junior category  KF Junior with the Finnish Niko Kari and the Belgian Matteo Raspatelli. Here CRG is represented by the private team Forza Racing with the strong Russian Robert Shwartzman and the English BillyMonger, both on CRG-Parilla. On the Kalì-Kart chassis the team VTK Racing with the Rumenian Cici Cicinescu and the Go Kart tema with the other Rumenian Andrei Vajda. CRG Holland, on the other hand, fields the young  Stan Pex, younger brother of  Jorrit Pex. The other private drivers racing on CRG chassis: the Spanish Marta Garcia, Lisard Santos and Xavier Llveras, besides Pietro Mazzola on LH at his debut in the category.

Very crowded also the participation in the smallest category, the 60 Mini, with the Gamoto Racing team with the Spanish  Eliseo Martinez and the Malaysian Abdul Gafar Muizzuddin Musyaffa, AB Motorsport with the Russian Bogdan Fetisov and the Greek “Kostantinos”, LH Racing with the Belgian Esteban Muth and O’Neill Muth, KK1 with the Croatian Max Herendic, then Francesco Tripoli.