Author: Vroomkart International
Subscription for the 20th Andrea Margutti Trophy, the important and awaited event scheduled on the kart racing calendar, start on 19th January 2009. After 17 events, having had to leave the historical Parma circuit, the event, scheduled for 18-22 March, moves to a new site, the “Pista 7 Laghi” in Castelletti di Branduzzo, Pavia (I).
As from this year, to underline the importance of the “Andrea Margutti Trophy”, having obtained International Federation approval, becomes a “FIA Authorised Series”. Among innovations, this 20th edition sees the entry of the KZ2 gear-class that takes over from KF1
The usual international classes KF2 and KF3 will see the presence of younger, promising drivers on a world wide scale. Together with these young classes, the KZ2 queen class steps in, it has always been the scene of exciting battles 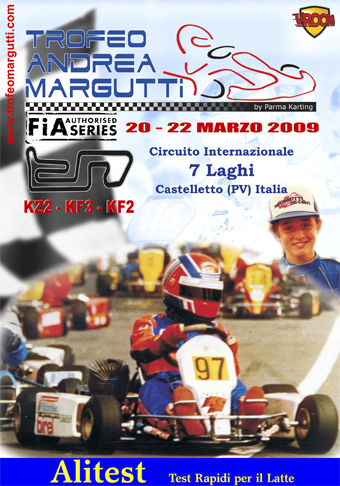 between the more experienced karting drivers who now go to enhance the “Margutti Trophy” too with a plateau that is already forecasted as being a concentration of top Europe and World drivers.  Just for news, the gear class was already been presented for the “Margutti” in 1991 and 1992 together with the International class, and back then it was the many times over world champion Alessandro Piccini and Gianluca Beggio who too wins. In its long history, the Andrea Margutti Trophy, dedicated to a young driver who left us far too early, has always counted on the entries of the best drivers in the world, starting from F1 driver Giancarlo Fisichella, who has grabbed the Trophy four times (1990, 1991, 1992 and 1994). The other F1 drivers who won the 100 Junior in 1999 is Robert Kubica and today’s World Champion Marco Ardigò, 100 ICA and Formula A protagonist in 2006.
Last year, Britain’s Gary Catt took home the win in KF1 and the Czech Zednek Groman won KF2 while Italy’s Ignazio D’Agosto grabbed KF3 win. Maximum grids accepted for the next edition of the Margutti are: 80 for KF3, 80 forKF2 and 50 for KZ2.All entries must be  requested through official form and set to Parma Karting ASD, Via Emilia Ovest 239b, 43100 Fraore, Parma, Italy. Expiry date for entries 18th February 2009.