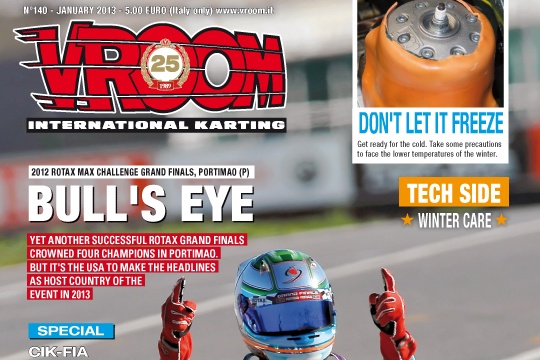 The 2012 season ended up with the single-make event of the season, the Rotax Grand Finals hitting the Bull’s eye in Portimao. A true celebration of karting, with the added surprise of the USA chosen as host country of the event in 2013. The event deserved extensive coverage, and we dedicated to it 24 pages featuring exclusive interviews to the protagonists, pictures, curiosities and the exciting race report. But there is more to it, which you will discover in the following issues...


RACE REPORT – Rotax Max Challenge Grand Finals
The 2012 Rotax Grand Finals, the single make event of the year has not let down expectations; on the contrary, it has lifted spirits compared to the previous editions. And the 13th edition is all in the sign of North America that grabs the DD2 final with Ben Cooper (Canada), but above all it was chosen to play host – the facility is Nola Motorsports Park in New Orleans – to the Rotax Grand Finals in 2013.

FACE TO FACE – Richard Boisclair
Richard Boisclair, President of MaxSpeed Group, is the Terminator of karting. Don’t get me wrong, he’s not here to ‘terminate’, or do away with anyone! His mission: to finish with the past. The bold way that he took on American karting reminds us of a Hollywood movie starring Arnold Schwarzenegger (the first of the saga, of course), where a robot comes from the future to change the course of history. Unlike Arnie, Richard is the good guy…

TALKING TO – Ton Koebolt & James Leong
At the Rotax Grand Finals in Portimao we met with Ton Koebolt, owner of the company producing Xeramic and XPS lubricants, and James Leong, President of KRS Motorsports, Rotax distributor for most Asian countries, who disclosed their ever-stronger partnership that will make Asian karting more and more exciting. 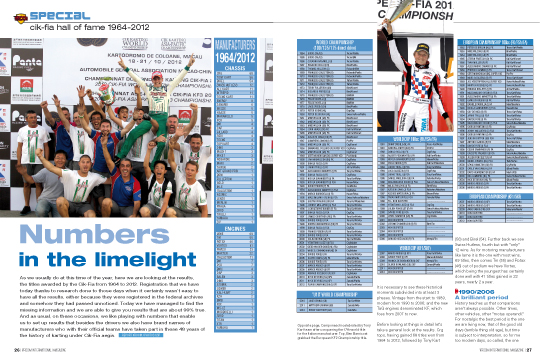 THE ITALIAN JOB – Armando Filini
Armando Filini is one of those who prefer actions to gossip, a pragmatic man. His coherence has always made him stand out. You can see the importance of his role but he never exceeds the limit of protagonism. He started out when he was very young and still today he works with passion and expects his drivers and collaborators to work and live with serenity. This is why the team manager and talent scout is one of the most loved and has a series of important results on an international level.

RACE REPORT – 500 Milhas Granja Viana
The most famous kart race in Brazil, the Granja 500, disputed its 16th edition at the Beto Carrero’ Go Kart Track, in the city of Penha, coast of Santa Catarina state.

SPECIAL – Different karts
Many think that today’s karting with the KF and KZ classes is somehow “inevitable”, that there are no alternatives. Instead, we are going to show you that there have been several chances of racing, and enjoying oneself with the different vehicles from at least three different points of view.

SPECIAL – How to get ready for the cold
Karting needn’t necessarily … to freeze when the cold season steps in, however, all round, it is better to take some precautions to face the lower temperature.

ON THE TECHNICAL SIDE – Winter Care
Here you will see some of the best ways to put away your kart so that it is ready (or nearly ready) when you take it out again in spring. 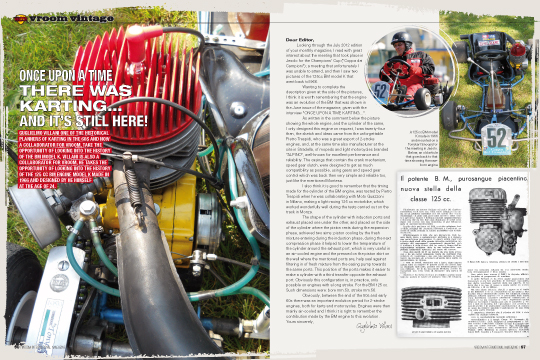 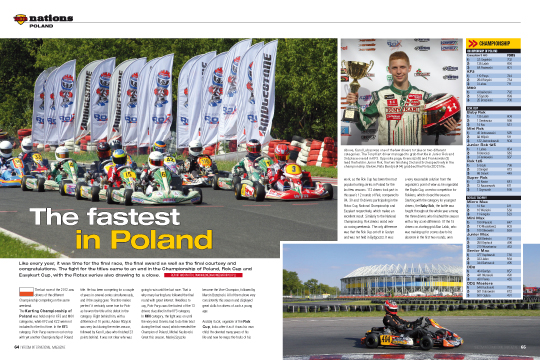 COLUMNS – Mondokart, VroomMama, Learn Your Data, 2013 International racing calendar
The news section opens up with the FIA celebration of the 2012 World Champions, including our two champs Flavio Camponeschi and Henry Easthope. Crg also awarded its drivers and teams; Art Grand Prix unveiled its plans for 2013; KG introduced a new expandable rear bumper; the Offenbach Show is approaching; Karting Challenge in memory of Dan Wheldon to take place at the Autosport International in Birmingham.
The new column 'VroomMama' talks about the supporter role of parents, and in 'Learn Your Data' our engineer explains that consistency is better than one fastest lap.
Last but not least, the approved 2013 International racing calendar to keep in your agenda