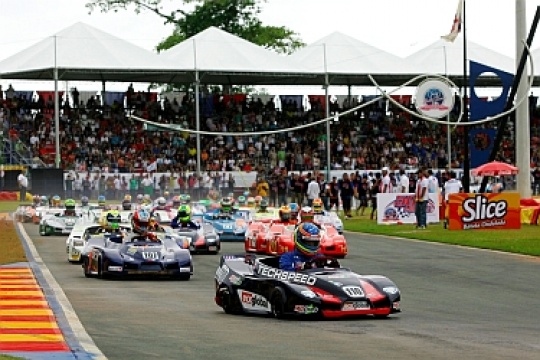 Author: Vroomkart International
The most famous kart race in Brazil, Granja 500, disputed its 16th edition last weekend (15), in the Beto Carrero’ Go Kart Track, in the city of Penha, coast of Santa Catarina state. 650 laps and nearly 12 hours of race for a great event. The Spirit Sport team was the winner.
With the presence of famous drivers as, Rubens Barrichello, Tony Kanaan, Lucas Di Grassi, Jaime Alguersuari, among others, the Granja 500 rocked in the Beto Carrero’s go kart track.
After 650 laps, the Spirit Sport team, that was formed by Alexandre Ruiz, Ernani Kuhn and John Pretto, won the marathon.

The race was very exciting, with several different weather conditions. The rain and pitstop defined the winners. The team Itaipava / Caras, led by Rubens Barrichello (eight-time winner of the race), had problems during the race and didn’t reach the podium. The race started with a dry track. In the tenth hour of the race, when it was night, the rain came and defined the champions.
Alexandre Ruiz, who drived the kart winner, told how the strategy was. "We decided not to stop to change tires when the rain came. We took the chance and, in the end, everything worked out. It was difficult to drive, but we knew we could win, "said Ruiz, twice Brazilian kart champion.
The second place went to Team Slice / Fittipaldi, led by Christian Fittipaldi and Nelson Piquet Jr. The third position went to Team Insano Racing, winner of the 15th edition.

Now, the Beto Carrero’s Go Kart Track prepares itself to host the All Star Challenge, promoted by Felipe Massa in January 2013.