Author: Vroomkart International
The Rotax Grand Finals, the single-make World Championship held in Italy defined the Olympics of karting, numbered more than 216 drivers representing 57 countries. Could this be the true world karting championship? Also, after Kubica’s exploit, World F1 Champion Lewis Hamilton’s chassis is a big hit too. Get a full insight on all models of the latest chassis homologation. And find out more on CIK latest Super KF, an evolution of KF1 mounting the new monotype and monolithic clutch. 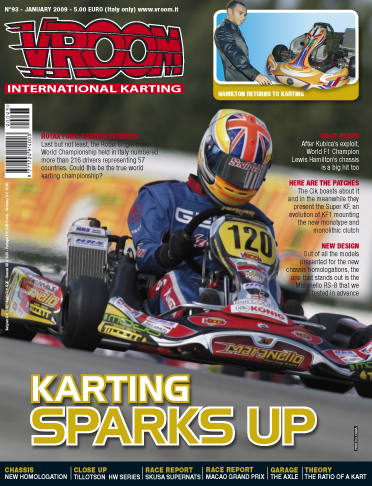 Here we go again. Today, the karting movement in particular is once more thinking about what has to be done. And nearly always, listening to what operators say, a word here and a word there, we get the feeling that things aren’t very reassuring. The market is at a standstill, there’s no haste, and people look around and start moaning… What are we going to do?! Come off it, it’s always the same old story. What makes me smile is that although at his time of the year there seems to be a doubtful future ahead (nothing new) it’s also true that the same pessimism seeps through thoughts of those who aren’t so trained in interpreting with awareness of thought the right signals coming from the karting community. This thought should reflect within each one of us. I, personally, as Vroom editor, have always asked myself if all this negativity on behalf of those operating in karting and perhaps, also on behalf of some karters, doesn’t depend on lack of awareness of the world in which we live. The world of economy: and in this case it’s utopia to think of a solution that could convince the governing bodies put in practice projects that can solve things in a short time, the mechanism is subject to several uncertainties we’d like to believe that, even if things aren’t so, there are politicians who should mediate, meditate and avoid some catastrophes. No, I’m referring to our world, the motor-sport world, which however cannot be separated from the rest of the world. And for us common karters, it’s already something if we could keep these two aspects that draw us to karting, apart. One is the love for the sport that induces us to practice the sport, and the other is the image given by the same karting movement that race and on which the karting industry pursues for business. The one cannot be separated from the other. These two aspects that fluctuate in an only sphere hardly ever enter in conflict. If they do, it’s because there’s so much tension in the air – due to kart drivers not feeling at ease, the sensation they feel of losing the freedom of protesting, or rather: give vent to, measure and challenge their limits, in optimum conditions, in a challenge against time – that any signal that doesn’t involve them personally is interpreted as an insult. It’s as though a split has been caused. And maybe, subconsciously, this is exactly what’s happened: a split between industry and the karting community. Between “professional” and amateur karting. A gap that’s becoming more and more evident as time goes by.
However, from this awareness we must draw a line. The karting world should be seen as different areas, in which each individual is free to step. It’s a question of choice, a wealth belonging to all human beings.
A foreword is important: karting is itself an expensive sport, like all motoring sports. And it’s also true that everybody should get a chance of practising it in the best way possible, according to how much each individual can afford. An if, there are some who come out with smart karts, all done up for personal satisfaction and show off with it without even using it on the track, he’s free to do so. And not for this reason one should be there to dictate rules over certain commercial strategies.
Industries tend to draw profit risking their… They have other things to think about. Let the Federation see to problems concerning Sunday Karters.
So, after having getting the blame for lack of awareness, we karting enthusiasts and operators can’t not mention, those who are still unaware and should represent and guarantee for all the karting movement, manufacturer and consumer (request and offer). In all these cases, and especially on behalf of all the karting authorities, you feel, unfortunately, still too much approximation.
But it’s not easy to do away with a certain mentality, which has unfortunately had manna from heaven. But now, that there is work to be done and present credentials we realise that professionalism, the attitude, ability and efficiency that would allow karting to emerge in all its forms in hardly any time at all has difficulty even in breathing, because it lies in primordial mud... Who knows if it will be able to emerge?
Talk about crises, just for the sake of interpreting a situation that has clearly spread. People hove no money (Italy is the first in the world for money pro capita spent on gambling)… Then there’s the looking up to heaven hoping that manna will fall, because that is all they can do. We should stop using the economic crises as an excuse. We should always and only worry more about the lack of professionalism that rages over the karting world.
Yes, an obvious deduction… Approximate? 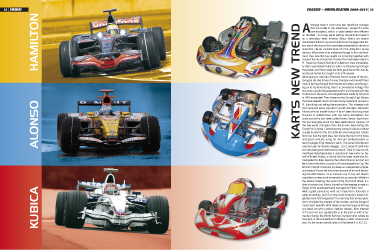 CHASSIS – HOMOLOGATION 2009-2014   The new homologation period 2009 – 2014, which slightly overlaps with the previous one (2003-2008), starts with the New Year. Some of the successful models have been improved and proposed for this homologation too, other absolute innovations have made their debut in this difficult field, but there are few models that propose new ideas. Products and time is right (but difficult). There is always less room left for improvising and resources are directed towards specific studies and research that start to take on a very professional profile. In the end, many think that a chassis is always a chassis, however, we must say that it’s the details that make the difference and determine a better overall efficiency.
However, to give fuller information, we will also describe the general feeling that one breathes in this field, and what some of the people involved think. There is an overall general view which says that working to improve the chassis has been overlooked lately, also because manufacturers and teams have dedicated more time and energy to the new KF engines, especially by the renowned clutches, with “fine tuning” that give great advantage respect to the competition on the market, in fact, some say that it would go fast even if it powered four wheels mounted on a gate. This perhaps might be one of the causes that the newly homologated chassis look quite “traditional”. 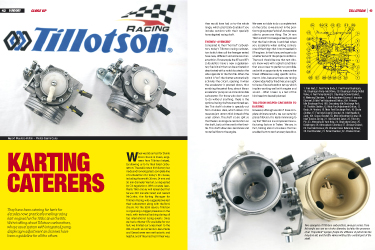 CLOSE UP – Tillotson   They have been catering for karts for decades now: practically making racing kart engines for the 100cc since the 80s. We’re talking about Tillotson carburettors, whose usual system with integrated pump, diaphragm adjustment and screws have been a guideline for all the others. 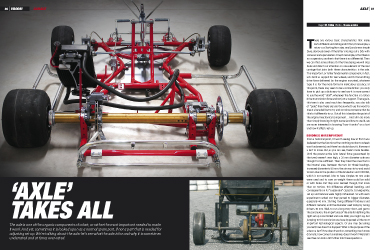 GARAGE – Axle   The axle is one of the organic components of a kart, or rather the most important needed to make it work. And yet, sometimes it is looked upon as a normal spare part, if not a part that is needed for adjusting set up. We’re talking about the axle: let’s see what the axle is for and why it is sometimes underrated and at times over-rated. 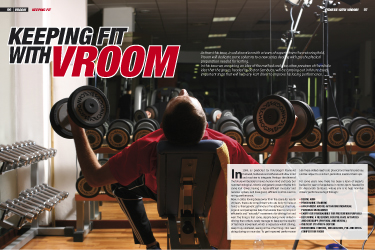 KEEPING FIT – Fitness with Vroom   As from this issue, in collaboration with a team of experts from the motoring field, Vroom will dedicate some columns to a new series dealing with psychophysical preparation needed for karting. In this issue we are giving an idea of the method and give a few previews of the whole idea that the group, headed by doctor Sambuco, will be carrying out in future issues, important steps that will help any kart driver to improve his racing performance. 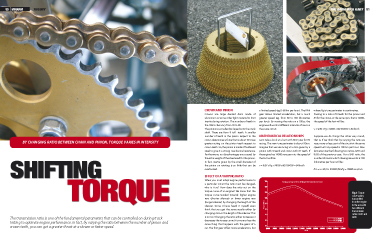 THEORY – The ratio of a kart   The transmission ratio is one of the fundamental parameters that can be controlled on during track testing to optimise engine performance. In fact, by varying the ratio between the number of pinion and crown teeth, you can get a greater thrust at a slower or faster speed. 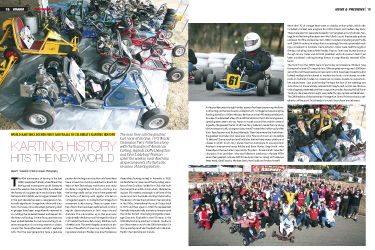 HISTORIC KARTS   The man they call the greatest kart racer of all time, 1973 World Champion Terry Fullerton along with the founders of American karting, legends Duffy Livingston and Faye ‘Ladybug’ Pearson spent the week in rural Australia as special guests of a fantastic re-union of karting history. 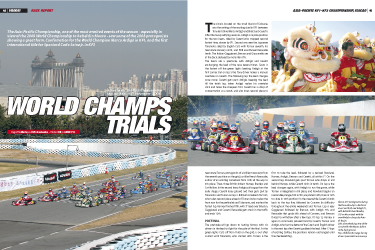 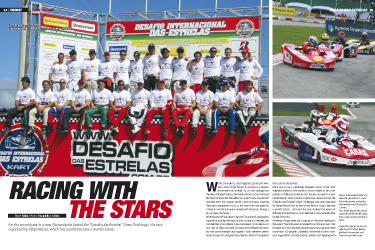 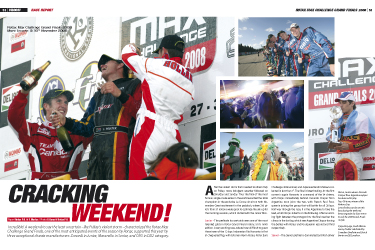 RACE REPORT – Rotax Grand Finals   Incredible! A weekend to say the least uncertain - like Friday’s violent storm - characterized the Rotax Max Challenge Grand Finals, one of the most anticipated events of the season by Rotax, supported this year by three exceptional chassis manufacturers: Zanardi in Junior, Maranello in Senior, and CRG in DD2 category. 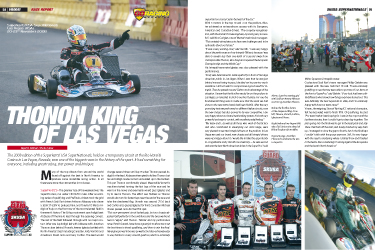 RACE REPORT – SKUSA Supernationals   The 2008 edition of the Superkarts! USA SuperNationals, held on a temporary circuit at the Rio Hotel & Casino in Las Vegas, Nevada, was one of the biggest races in the history of the sport. It had something for everyone, including great racing, star power and intrigue. 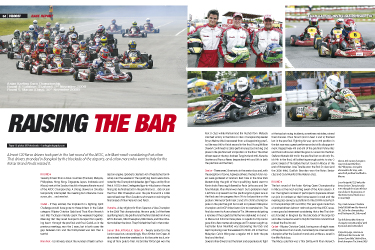 RACE REPORT – Asian Karting Open Championship   Almost 120 fierce drivers took part in the last round of the AKOC, a brilliant result considering that a few Thai drivers stranded in Bangkok by the blockade of the airports, and a few more who went to Italy for the Rotax Grand Finals missed it.


NATIONAL RACES   The last issue of 2008 presents the Sun-State champions from California (USA) in the very fast circuit of Grangé, and Australian Formula 100cc and 100cc Heavy Champions


CARTOON – The chemist … part II  TardyBraker did find a way to get more power out of his engine, maybe a bit too much…