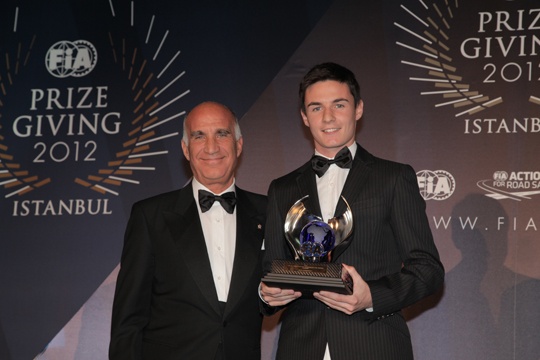 After New Delhi, in India, last year, it is Istanbul which hosted the yearly Gala organised by the FIA. The Champions of this year have in particular been rewarded. Karting was also represented in Turkey. On the stage, the Italian World KF1 Champion, Flavio Camponeschi, joined Britain’s Henry Easthope, who has won the U18 (for Drivers under 18 years old) World Championship. Furthermore, the French works team Sodi – represented by Gildas Mérian and his wife, respectively President and General Manager of the brand – was also honoured for having landed the title of World Champion for Makes thanks to Henry Easthope.
Third in the 2011 CIK-FIA World Championship, Flavio Camponeschi has finally found his grail. The 20 years old Italian who represents the prestigious team Tony Kart accomplished his dream by donning his maiden world crown in a championship he led from beginning to end. Winner of three races out of four in the opening round held at Suzuka, the Italian subsequently managed his advantage in the best of ways despite some hitches during the final at Macau.
“In Suzuka I was very fast and sometimes had a bit of luck”, he explained. “But the second event at Macao was more difficult. I was quick there as well, as indicated by my second and first places in qualifying practice, but I also had a few setbacks. For a moment I thought I was living a nightmare when my starter got blocked at the start of the first race and forced me to retire even before the start. Fortunately I could make up for it afterwards, and I feel I had one of my best races by recovering from 30th to 2nd position. In any case, this world title is a fine reward for all the work carried out, and I am obviously very happy.”

Reserved for Drivers under 18 years old who all disposed of identical engines allocated by drawing lots and supplied free of charge by FIM, the World Championship produced a scenario worthy of the best thrillers. After his domination in the Portuguese event held at Braga, Henry Easthope managed to stay in the lead of the competition in Angerville (FRA) despite a more difficult weekend. The Briton therefore arrived in Bahrain as the leader for the final of this championship. In the first race organised in the Middle-East in the CIK-FIA’s history as well as the first one held at night (and lit by huge spots), the spectacle was total. Indeed, it was only two corners from the chequered flag that Henry Easthope, taking advantage of an incident ahead of him, managed to gain two places, thus winning the world crown by just one point.
“No matter what happens, this year 2012 is the best since the beginning of my career”, Henry smiled. “And the outcome of the championship was probably one of the most stressing episodes of my whole life… For me the season had taken a perfect start at Braga and I left Portugal with the maximum of points. But it was harder afterwards. In Angerville I suffered on a track which does not really suit my driving style. Then there was this incredible weekend in Bahrain. I was fast but also very nervous, and I made a few mistakes as a result. I only started the final from 16th place but I gave everything and took advantage of an incident ahead of me to gain another 2 places on the final lap. When I crossed the finish line I did not know I was champion. Afterwards, however, I had an enormous joy!”
Third Briton in a row who wins the U18 World Championship after Jake Dennis and Matthew Graham, Henry Easthope also offered the title of World Champion of Makes to Sodi.