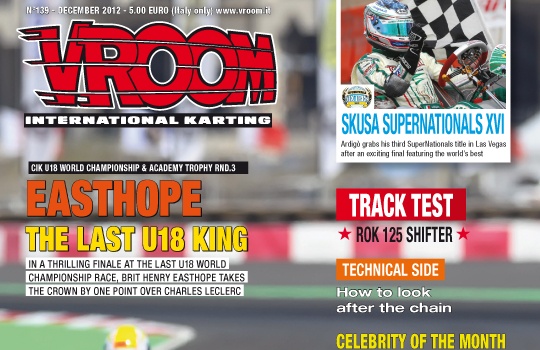 Running slightly late with our latest work, but it was worth the wait! We could not release our pre-Xmas issue without at least a preview of the single-make event of the season, the 2012 Rotax Grand Finals in Portimao, that is. As for the top stories, you find the U18 World Champs and SKUSA SuperNats, an exclusive interview with new World Champion Flavio Camponeschi, the Track Test of the brand new Rok 125 Shifter, and a lot more...
FROM THE EDITOR

Karting spreads if you have the right format
For me this year, 2012 had 2 faces. As far as the magazine I edit on a national level, I can say that, seeing what has happened in Italy, it certainly isn’t a year to remember. Looking at the international scene though, karting seems to have maintained credibility. Maybe because in other countries they have managed to understand, so to say, better and make the most of the international crises turning it in their favour, and making assertive solutions in such a difficult time. We have seen some activities going on in different countries that confirm the fact that simplifying some promotional activities does create interest in karting for motorsport enthusiasts. Simplify doesn’t always and only mean to look at things exclusively from an economic aspect. True that limiting expense is a positive note for anyone practising karting, but it is also true that a right format, which corresponds to the karters’ needs, those who practice racing, will get the right response.
Everyone knows that motorsport is more expensive than other sports, where no technical support is required, only psychophysical training. Hence more attention should be given to those who have to invest to practice karting. This way the user can only concentrate on racing - that is what has drawn him or her to practice karting - without having to experience problems that hardly ever depend on his behaviour, as often happens (well, it does in Italy), things that happen due to regulations open to different interpretation, which compromise the result of a race.
Having said this, I repeat in international karting, thanks to the fantasy of some promoters, more adventurous and brilliant federations, unlike Italy, have had a successful 2012 season. Although Italy is in continuous fermentation, it seems impossible to give life to some ideas, although some signs make one think differently. But, let’s go back to a wider vision of things, to what is happening throughout the world. What models should one look up to today? Besides Skusa that thanks to Tom Kutscher is a reference point in the States, for the rest Rotax is still the most popular. And rumours saying differently are not true. You see, numbers speak and in 2012 Rotax engine sales have been up to over 6,000… A number that makes your eyes goggle. And although a brilliant result, we can say that it is the result of hard work, promotion and investment finalised to satisfy the needs of those who practise karting. A thought comes to mind: international karting is running alongside the project promoted by BRP. Well, to this point nothing to say, on the contrary. This Rotax fever in continuous expansion is motivating lots of operators, inviting to invest in this format, thought to be the most credible and obviously the best investment. And, it isn’t just a coincidence that the next edition of the Rotax Grand Finals will be held in New Orleans in the USA, that is the country where most drivers registered this season in Portiamo come from. And it isn’t hazardous to say that also the big chassis industries try not to miss out on this trend and present their candidancy for the Grand Finals. A decision where there are no doubts, on the contrary, a far-sighted planning recognizes that the Rotax project is the one that offers most guarantees at such times made uncertain by the federal policy (Cik/Fia) and the future of KF.
The most obvious route to take is the one laid down by Rotax and other important innovations that confirm this tendency will soon be revealed.
Obviously, Vroom is following all this with interest, our aim is to point out these things and continue our mission to inform you about such interesting reality, and about the drivers whose response is more and more enthusiastic towards our editorial line and the return of image that this event is building up. A gratifying acknowledgement confirming the place that Vroom has earned with its dedication in publishing a magazine that is more and more centralised in informing readers on what is happening in the karting world, contributing in helping to amplify ideas that work and, at the same time, keep up any initiative that is finalised to draw as many people as possible to this extreme … sport.
I take the advantage of thanking all those who have made Vroom the reference point of international karting, thus giving us a chance to help in promoting important projects, like the Rotax format, in several countries. A special thank you to the operators who on these important trips to the USA, for the Skusa, and in Portugal, for the Rotax Grand Finals, have confirmed their belief in Vroom.

Merry Christmas and a Happy 2013.
All the best to Vroom too, for its 25th anniversary.

RACE REPORT – CIK U18 World Championship & Academy Trophy Rnd.3
In the first night race in the history of international karting, English Sodi driver Henry Easthope wins the Under-18 World crown beating the star of Art Grand Prix team Charles Leclerc by one point. In the mind-blowing ‘One Thousand and One Nights’ scenery, Australian Joseph Mawson jumps to the top step of the podium after a superb performance. 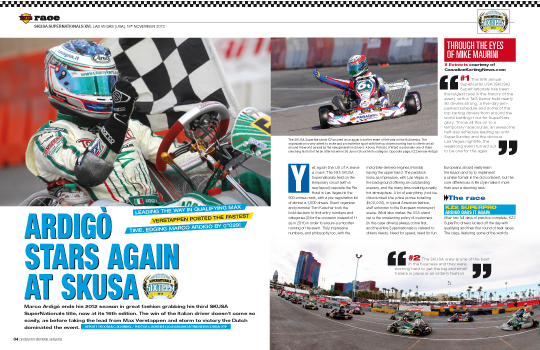 RACE REPORT – SKUSA SuperNationals XVI
Marco Ardigò ends his 2012 season in great fashion grabbing his third SKUSA SuperNationals title, now at its 16th edition. The win of the Italian driver doesn’t come so easily, as before taking the lead from Max Verstappen and storm to victory the Dutch dominated the event. 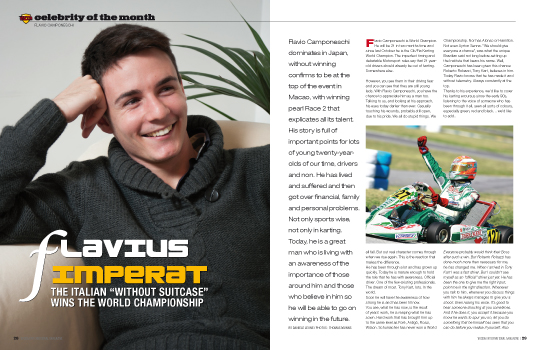 CELEBRITY OF THE MONTH – Flavio Camponeschi
Flavio Camponeschi’s story is full of important points for lots of young twenty-year-olds of our time, drivers and non. He has lived and suffered and then got over financial, family and personal problems. Not only sports wise, not only in karting.

RACE REPORT – Easykart International Grand Finals
Ten years since it first started, this event represents the epilogue of all the Easykart Championships raced in the world. And, to confirm its ever increasing presence of international drivers, it is the first time that we haven’t ever heard the Italian national anthem being sung when the awards were being given.

ON THE TECHNICAL SIDE – How to look after the timing chain
Drive to the wheels is a very important mechanical element, simple but fundamental, and if it betrays us due to our lack of experience or lack of attention, it can really ruin a race, and not just that, it can cause  lots of other things too. So here is some advice to help you, so you can get to know more about it and learn how to carry out maintenance and adjustments.


NATIONAL RACES
With most of the national championships over, we report from the first last race in Portugal, the Portuguese Karting Cup, and from New Zealand which hosted the North and South Island Kart Championships.

COLUMNS – Mondokart, VroomMama, Learn Your Data
End of the racing season also means new products. We open the news section with the brand new EVK and KSK chassis by Tony Kart. Product news also by Birel, which introduced evolutions to the world famous C28 Cadet chassis for the American market. Rotax importer for North America, MaxSpeed Group announced dates and venues of the 2013 Rotax US Grand Nationals. Maranello presented several novelties at its Maranello Days in Lonato. Also, a last minute preview of the 2012 Rotax Grand Finals in Portimao...
The new column VroomMama talks about the importance of friendship and good company, and in Learn Your Data column we shaved 8 tenths off one our reader’s best laptime.