Author: Vroomkart International
As the race goes on, Tonykart N. on driver is favoured by mechanical problems that his rivals run into. The most unfortunate was KZ1 World Cup winner, Jonathan Thonon who had to retire on lap 18...

As the race goes on, Tonykart N. on driver is favoured by mechanical problems that his rivals run into. The most unfortunate was KZ1 World Cup winner, Jonathan Thonon who had to retire on lap 18 due as he was having problems with gear stick as he was leading the pack. Gary Carlton bucked up Crg team spirit; he was very fast throughout the weekend and took a good second place. Also Intrepid driver from France, Iglesias, uncertain at the lights but he makes up and grabs a brilliant third. Davide Foré (Maranello) as usual storms round the track, he takes his rivals, he fights for the lead; after racing with leaders, he's fourth to the chequered flag.

A pile up immediately after the lights halves the grid. Dreezen’s kart blocks and several drivers hit it band on: Piccini, Gallepe, Manetti, Wiegand and Jurca. A few laps on Rudolf and Speed are forced to retire too. Ardigò, pole start, is closely shadowed by Carlton and Vorrath. Lady luck though doesn’t help the latter, one of his tyres comes off and he has to retire on lap five. In the meanwhile, Forè is gaining places (row eight grid) and draws closer to Ardigò, but a very fast Thonan overtakes Carlton first and then Foré looking to leader, Ardigò, as his next prey. There’s lots of place swapping to lap 15 when Thonan gets overexcited and gets faster with each lap, stops best lap time on lap ten 51”778) and pulls away from his rival. Surprise on lap 18. Crg top driver passes finishing line at a slower pace: he has problems with his gear lever and is forced to retire, Ardigò thanks him and takes over the lead...3” from flag the leading trio, Carlton, Iglesias and Foré follow through. For American drivers too, this weekend has been a weekend best forgotten. Allen (row two grid) had to retire due to mechanical problems (the same fate for Mandarino and Leesman a few laps earlier); Fox, grid six, drops back and can do no better than 14th. Ron White is very fast coming up from rear to grab fifth in front of his fellow countryman Halen. 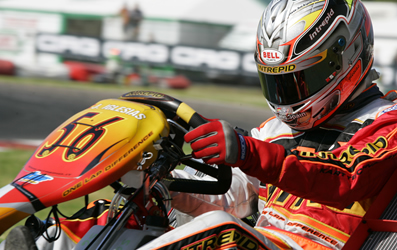