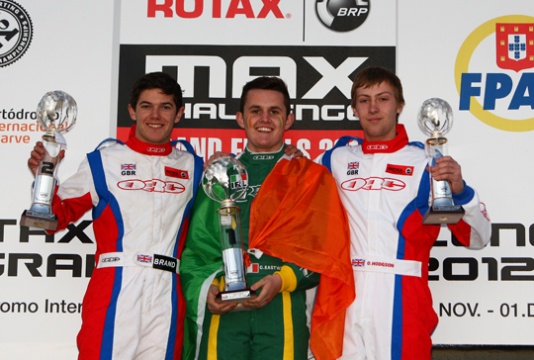 The 13th edition of the Rotax MAX Challenge Grand Finals is in the books after breaking all records and generating the interest of all specialised media around the world. Big credit also goes to the organizers of this event and the superb circuit in Portimao. The final day has been blessed by good weather, even though the low temperatures didn’t allow to wear T-shirts, and some fantastic racing. Very hot racing, but with an end result which promoted the more experienced drivers. Also because the strategy and the smooth racing lines pay at the end in Portimao.
In Junior Max, English driver Webb came back up from the back of the field after a perfect performance. Morgado and Cooper left nothing to the competition in DD2 Masters and DD2 respectively, but the result was somewhat predictable. Senior MAX provided the most exciting race with Ireland’s Charlie Eastwood pulling off the race of his life.

Junior Max Final
Shortly after the halfway mark, Webb sneaks in through the leading duo made up by Golding and Esmeijer, who had a tough confrontation in the early stages also with Gunn. Not too far behind, Webb and Thompson were making up places. While no one up front was able to have an edge, Webb went through on lap 12 at the hairpin. From then on it was all downhill for Webb who built up over 10 meters gap on the chasers (also joined by Thompson) unable to take advantage of the slipstream. Game over with Webb grabbing the title and a final action packed lap with Thompson moving past Golding and Esmeijer for 2nd.

DD2 Masters Final
After the title in 2003 (Senior MAX) and in 2011 (in DD2 Masters) Cristiano Morgado made it 3 Grand Finals besting the competition in a very hard race. A three-kart train, soon after become 4, fought hard right from the green lights. By halfway through the race, no one seemed able to make a break, mainly because the slipstream doesn’t allow it in Portimao. But with 6 laps to go, Morgado started to make a gap on Griffiths, soon tailed by Campbell and Gaivao unable to stay with the leader. The fight was then all for the runner-up spot while Morgado went on to grab the third Rotax Grand Finals title over Campbell sneaking in Griffiths in the last lap.

Senior Max Final
A pack of seven drivers was all in for a fight in the early stages of Senior Max final after making the break from the field. And the pace is truly hot with unrelenting fighting and position changes. Pole-sitter Ukyo Sasahara, two-time Grand Finals champion in 2009 and 2011 was the man to beat. And with him up front, Australian Pierce Lehane is the first to take the fight to the Japanese followed by Hodgson, Eastwood, and Brand not too far. And these four outstanding drivers put up a truly superb show. A lot of action for the lead, as well as some contacts, but it was Eastwood to come out on top making up enough margin with 3 laps to go to grab a safe win. Behind him it’s just mayhem, and at the chequered flag Hodgson and Brand manage to step on the podium with a surprising Finkelstein completing the top 4.


DD2
Not so much excitement in the DD2, because Cooper is from a different planet. The Brit racing for Team Canada hits the 3rd Grand Finals title with a dominating performance, blasting the field from the green lights. On track action did not lack, but it was only for the lower steps of the podium. Clako and Ensbey took the flag behind Cooper, but the Aussie was later demoted to 4th for a malicious contact with Detige in the final lap.


For the full standings visit http://live2012.kart-data.com/RGF/