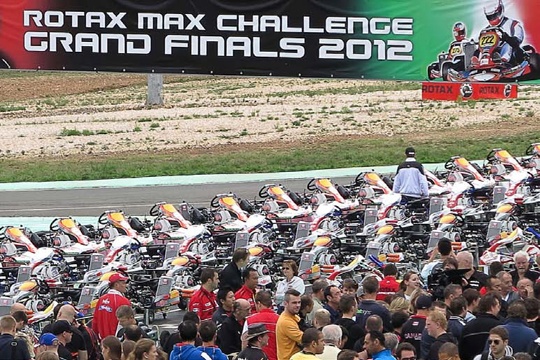 Rotax has once again confirmed its trust in Sodi by choosing it, for the third year in a row, as chassis supplier for the Grand Final to be held at Portimao (Portugal). As in 2011, the 77 entrants in the elite category Max Senior will compete behind the wheel of the already famous Sodi Celesta chassis for the world title in the specialty, on the Kartdromo Algarve, from 28 November to 1 December 2012.
«It is always a source of pride for us to earn the trust of a company such as Rotax, which is so important in the world of karting» commented Gildas Mérian, president of Sodikart. «Rotax as well as the drivers appreciate the quality of our chassis and the work done by all our team. For our part, we are very satisfied with our two previous participations in the Grand Finals, in Italy in 2010 and in the Emirates in 2011. We do not expect anything less this year in Portugal, in the beautiful setting of Portimao. Cooperation with Rotax is an essential element for our company with long-term perspectives.»

Although this partnership has always been seen as a reward by the world’s leading kart manufacturer, it is also one of those tough challenges that the Nantesbased company likes so much. The state-of-the-art production unit in Couëron had no trouble manufacturing 77 of the 2012 Celesta chassis (this new chassis has recently conquered the World Champion title at Bahrain) for the Portimao world event! Then the technical team took care of transport and assembly in Portugal, so as to enable entrants to take possession of their karts at the beginning of the week.
Not surprisingly, everything was ready on time and the 77 brand new Sodi/Rotax chassis looked just great on the start line of Kartdromo Algarve. For Sodi, success is already guaranteed at Portimao! This unique event will also allow many competitors, both from France and abroad, to experience in a top level competition the value of the new 2012/2013 Sodi chassis, whose performances have become more and more impressive at this end of season. As many as 270 drivers from 60 different countries are expected to the event in Portugal.

In a few figures
Sodikart, the world’s leading kart manufacturer, celebrated its 30th anniversary in 2011. Its cooperation with Rotax, the world’s leading manufacture of kart engines, began very early in the history of the French company, in 1988. Since 1999, Sodi has participated in the organisation of the Challenge Rotax France with a success that has never waned. In 2012, the success of the NSK highlighted again the appeal of the Austrian engines. Since 2010, Sodi has been Official Partner of the Rotax Grand Final as chassis supplier. The famous Rotax MAX 125 engine was created in 1997 and has enjoyed continued success since its launch on the market. Currently, over 7,500 drivers in the world compete in the different Rotax Max Challenge races, while 10,000 more enter competitions based on the same rules…