Author: Vroomkart International
This time Danilo Rossi has decided to take a very “big step”: become a manufacturer and present his own line of chassis. Find the exclusive track test of Danilo's two new models, the J90 and the M92, with all the data and feedback from our telemetry girl. Plus, Kubica's back in karting with his chassis line and racing team. Sodikart opened its doors to reveal some secrets of its success. And we talked to Maxter's new engineer Jan Witteveen, to Gianluca Beggio, to karting legend Sophie Kumpen, and last but not least, we present a selection of Xmas gifts ideal for your partner! 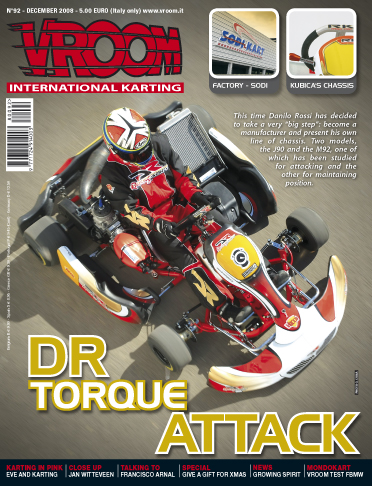 With the coming of the New Year, as usual, we all hope that it is going to better than this one. And, in our case (talking about karting), it shouldn’t be so hard. I mean, that it is difficult to even start thinking that it might be worse. It seems though, that 2009 is approaching with great expectations (this time last year, the feeling was awful). We have to hope that something, at last, is about to change, obviously for the better. Therefore, every signal must be interpreted positively. Starting with the new chassis homologation presented by all the factories. An interesting showcase for world karting. So, after DR team manager’s, Danilo Rossi, debut, and now in 2009 he breaks into the market as owner of a chassis brand in international karting. Also Robert Kubica with his RK and team managed by Pietro Sassi. High-sounding names, thanks to the resonance given by F1, and then there’s Alessandro Zanardi and Fernando Alonso, an important entry that will give a positive influence on media towards this ill-treated motoring sport. Therefore, not just branded, but awareness, confirming that karting is a reality that stirs interest on which people are willing to invest. All signals that can only make us hope. Hope though depends mainly on the regulations that determine the promotion, practice and safeguard of the same. This is why, more than ever, we must not be caught unaware, but must do our share to make the most of the opportunities that arise. The circle of professional karting has a character and a structure to meet any difficulties that may arise and it has proved it. It’s a place that keeps it going. But it is also true that there have been some difficulties this year. With the new engines, the interest of the younger generation in karting has somewhat dropped. But, it couldn’t have been otherwise, Even if the KF produces more power, regulations set a limit, castrating the prerogative of the image and racing. Especially in KF1. And as amply evidenced in the report last month (Karting A Step Back), this choice in policy is creating a drop in the credibility towards a “golden” world – the international scene – that drawn by official teams from manufacturing enterprises. An important showcase for the image of karting and not just a commercial aim, whatever anyone may think. It is, above all a visiting card, just the image whose aim it is also to publicise karting to the entire world. It is a technical evolution and the gests of protagonists who in some cases end up in F1, or there about. In any case, it is a compulsory training school for any driver who wants to take up a professional motor sport, karting included. Therefore, some signals given by youngster who hesitate deviating from karting somewhat and decide to go to the single seater before time. Or, worse still, giving up altogether. This is why the KF1 should be made more captivating. Responsibility of the Cik, but also manufacturers’ should put more pressure on those concerned until the right compromise is reached. The final aim being re-accrediting the most exciting “leit motiv” of this exclusively racing motor sport. We all know that you don’t drive a kart around the town, karts haven’t been made for this, on the contrary, it isn’t allowed at all. Karts are vehicles for tracks, above all designed for breathtaking speed, very fast, as fast as possible: keeping your foot down on gas pedal and no way is anyone going to overtake. Furthermore, one must not underestimate (as it must get its due) the formation aspect, both mental and physical training.

It is for this reason that I have found karting so exciting since my youth. It is real. Hence the name “Vroom”. The logo reflects the racing spirit, and it couldn’t be otherwise.
Vroom is connected to this philosophy; the editorial line underlines it every month. Emotion and passion: strong feelings, pulses that spring from a small powerful vehicle. An eternal bond. In all these years, we have reached important goals; Vroom is the most popular magazine in the world. Results that satisfy those who work on the magazine and for those who have believed and continue to believe in the project Vroom. And the mission continues… Thanks especially for the enthusiasm we get from karters each month. A special thanks to all the Vroom ‘aficionados’.

Wishing you all a peaceful and exciting 2009 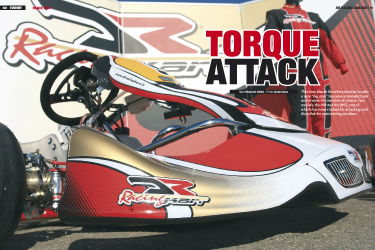 TRACK TEST – DR Racing chassis   This time Danilo Rossi has decided to take a very “big step”: become a manufacturer and present his own line of chassis. Two models, the J90 and the M92, one of which has been studied for attacking and the other for maintaining position. 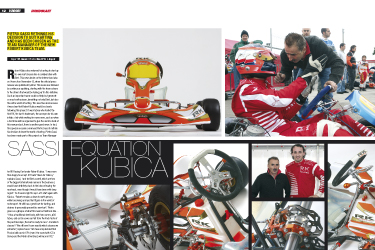 NEWS – Robert Kubica’s chassis and Racing Team   Pietro Sassi rethinks his decision to quit karting and has been chosen as the team manager of the new Robert Kubica team. 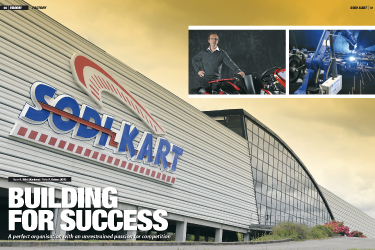 FACTORY – Sodi Kart   A perfect organisation with an unrestrained passion for competition. This is the impression you get after a comprehensive and thorough visit to Sodikart factory in Couëron, near Nantes. 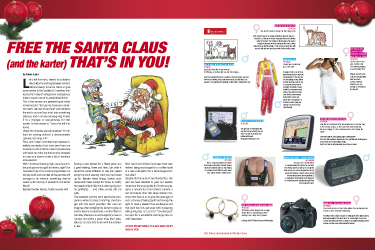 SPECIAL – Give a gift for Xmas   Let’s tell the truth, there’s no solidarity like solidarity existing between karters! We’re all ready to lend a hand, or give some advice in the “paddock”, however, there are strict rules of antagonism and jealousy inborn in each one of us, established limits. 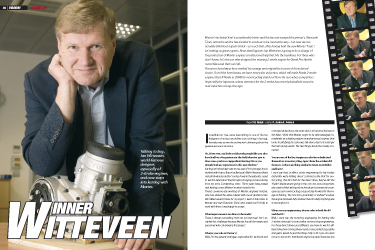 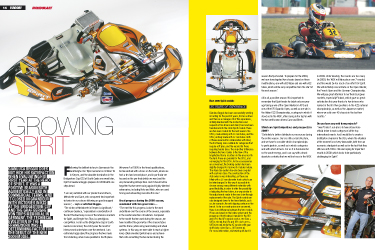 MONDOKART – Growing Spirit   Gianluca Beggio does not hide his satisfaction when evaluating his first year at the head of Spirit. It was a positive season both agonistically and in commercial terms, and it closed in grandeur with victories in KZ2 at the Bridgestone Cup and the Graf Berghe Von Trips memorial in Germany. The technical evolution of the framework was a determining factor for the debut of the new 2009 model. 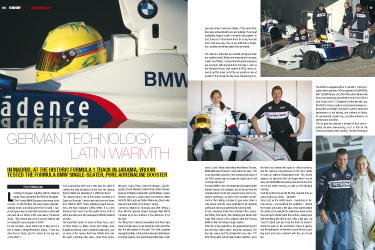 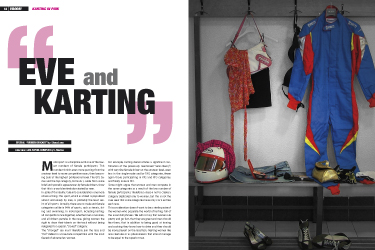 KARTING IN PINK – Women on kart   Motorsport is a discipline with one of the lowest numbers of female participants. In spite of this reality, take into consideration one more obvious thing: this sport, which as stated is populated almost exclusively by men, is probably the least sexist of all sports. Karting legend Sophie Kumpen, first female karter to win the Margutti Trophy, tells us all about her inspiring story. 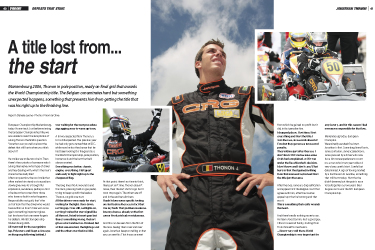 DEFEATS THAT STING – Jonathan Thonon   Mariembourg 2006, Thonon in pole position, ready on final grid that awards the World Championship title. The Belgian concentrates hard but something unexpected happens, something that prevents him from getting the title that was his right up to the finishing line. 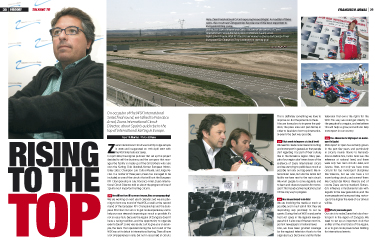 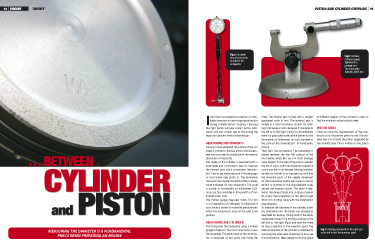 THEORY – Piston and cylinder coupling   Instrument and operation precision is absolutely necessary in order to get good results during cylinder piston coupling. 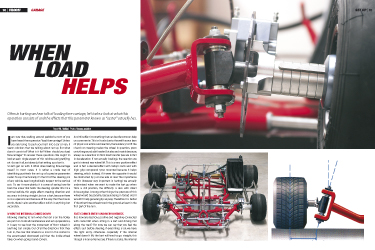 GARAGE – Caster set up   Often in karting we hear talk of loading fore-carriage, let’s take a look at what this operation consists of and the effects that this parameter known as “caster” actually has. 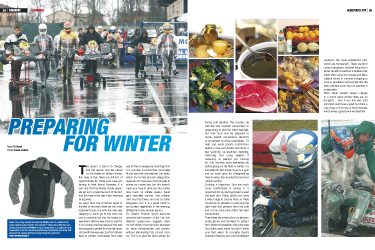 KEEPING FIT – Preparing for winter   The season is about to change, and the season that lies ahead is a bit harder on karters. Winter. But, here in Italy there are still lots of opportunities for those who have got karting in their blood. 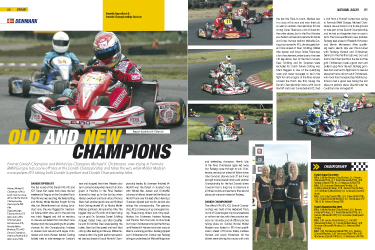 NATIONAL RACES   The last champions got crowned! In the USA, the WKA Manufacturer’s Cup drew its verdict; in the UK the MSA series and Rotax series went on to the very last lap to award the titles; Hungary saw some young guns taking the spotlight, while in Denmark past and present champions joined for the national final. Plus, a breathtaking KF1 final round in Japan; Thailand’s best finally crowned; and the brilliant two gear-box classes Shifter Series from New Zealand


CARTOON – The chemist   TardyBraker finds a way to get more power for his engine, but this time the end of the story is uncertain…