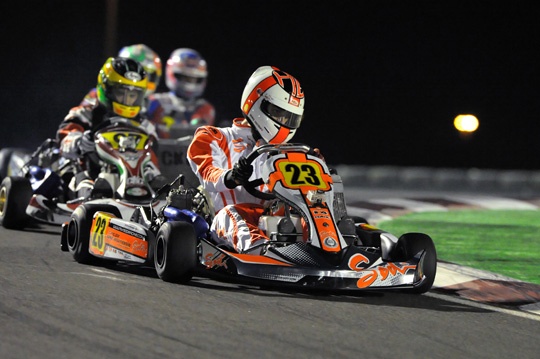 Press Release by: FIA Karting
At the end of a thoroughly exciting Final in Bahrain, the Briton Henry Easthope succeeded his compatriots Jake Dennis and Matthew Graham to take the U18 World Championship (for under 18-year olds). Second in the last Final of the season, won by the Australian Joseph Mawson, the Monegasque Charles Leclerc saw the title slip from his grasp by a single point on the very last lap. In the CIK-FIA Academy Trophy, the Driver from the United Arab Emirates, Thomas Michael Bale, won both Races, but 4th and a 6th places were enough for him to win the Trophy.

The suspense was tangible until the very last second. But by gaining two positions in the last lap of all and by crossing the finishing line in 8th place, Henry Easthope (Sodi) snatched the title of U18 World Champion at the Viva Karting Track in Bahrain. This scenario fit for a thriller was most fitting for this first appearance of World Championship karting in the Middle East, and also the first round in history to be run at night, under huge floodlights.

“I still don’t believe it,” smiled Henry Easthope during the press conference. “I gave absolutely everything I had all weekend. I was not too successful in the two Prefinals. I was pushed off the track at the start of the first, and then I suffered in the second. So I only started from 16th position. At the start of the Final, I was not very fast, but I gradually felt that my machine was running better and better and I began to gain places. On the last lap, two Drivers touched in front of me and I gained two more positions, and that made me champion. But it was a very stressful weekend!”

Henry, who will be celebrating his 18th birthday in just five days, is the third Briton in a row to win the U18 World Championship, after Jake Dennis and Matthew Graham. As for the French make Sodi, it took the World Championship for Makes for the first time in this category, joining previous winners Top Kart and Zanardi.

Having believed for a long time that he could don the world crown, Charles Leclerc (ART GP) was unable to maintain the leading position he had occupied at the start of the Race and had to be content with 2nd place both in the Race and the in the final classification for the Championship. The Monegasque, last year’s Academy Trophy winner, was certainly very close to winning the title in the senior category.

Leclerc did not win because in front of him Joseph Mawson (Top Kart) ran a perfect Race. Third at the start, the Australian overtook the Briton Ben Barnicoat (ART GP) and Charles Leclerc before holding them off for more than 10 laps. Fifteen years after James Courtney, he became the first Australian to win a World Championship race since 1997. Mawson finally won by less than 2 tenths of a second from Leclerc, with Barnicoat finishing a little more than 6 tenths behind, and only 39 thousandths ahead of the Italian Federico Savona (Top Kart), making a come-back towards the end of the Race. Whatever may be, this group of four Drivers within 7 tenths of a second put on a spectacular show for the spectators enjoying the top-class karting in the flesh, and also those watching the live broadcast on www.cikfia.tv.

At a respectable distance, the Briton Sam Webster won the battle for 5th place ahead of the Dane Martin Mortensen (FK) and the Russian Seva Gagen (Parolin). The Top 10 was completed by Henry Easthope, the Finn Ville Mäntylä (Energy) and the 2011 U18 World Champion Matthew Graham (Zanardi).

In the final classification for the Championship, Anthoine Hubert (FK) joined Henry Easthope and Charles Leclerc on the podium. But the Frenchman was somewhat disappointed to see his hopes fade following a collision during the second Prefinal. With a damaged chassis, he could do no better than 19th place in the Final. Thanks to his win in Bahrain, Joseph Mawson climbed to 4th place in the Championship ahead of Martin Mortensen, Matthew Graham, Federico Savona, the Briton Ricky Collard (ART GP), who lost any chance in the Championship following a collision in the Final, Ben Barnicoat and Sam Webster.


Academy Trophy: the title for Lappalainen

Leader of the Academy Trophy before arriving in Bahrain for the third and last meeting, Joonas Lappalainen proved his great maturity to take the title under the floodlights. Finishing the two Races in 4th and 6th places, the Finn managed the end of his season perfectly. “In Race 1 I fought for the victory, but I saw that my main rivals could not score major points,” he recalled. “So I didn’t want to take too many risks in the sprint final and I was happy with 4th place. In the second confrontation, I was involved in a scramble in the first bend and I was only 15th after the first lap. I then set to making a fight-back, and I passed the chequered flag in 6th place, my worst result of the season. In the Final, I think I was extremely consistent and I had been among the leaders in every event.”

Joonas Lappalainen’s title was all the more undeniable since the Spaniard Javier Cobian, second in the competition, could do no better than 10th and 16th places. For his part, George Russell had a weekend to be rapidly forgotten. Leaving the track at the start of Race 1, trying to keep up with Lappalainen and the Russian Alexander Maslennikov, the Briton was forced to abandon. He then had to abandon the second Race too, and dropped back to 10th place in the final classification.

These two Races fought in Bahrain will be remembered for the splendid double by Thomas Michael Bale, the representative of the National Federation of the United Arab Emirates. “I live an hour away from here by air,” the young man smiled, becoming the first winner of a CIK-FIA Race for his country. “And this event was really my home race. So I am more than happy!” 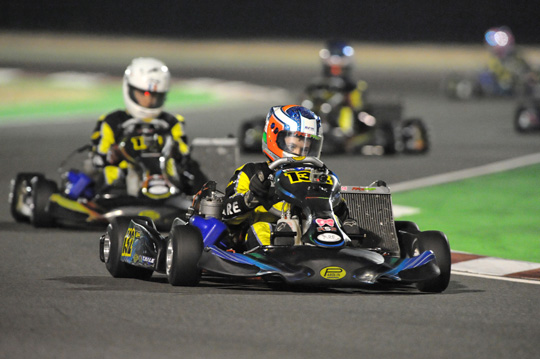 In the first Race, Bale was joined on the podium by the Russian Alexander Maslennikov and the Norvegian Martin Ellegard. Behind Joonas Lappalainen, at the foot of the podium, the Dutchman Martijn Van Leeuwen rightly led the Belgian Benjamin Lessennes. Also in the Top 10 were the Frenchman Erwan Julé, the Brazilian Giuliano Raucci, the Swede Lina Von Schedvin and the Spaniard Javier Cobian.

In the second Race, it was the Frenchman Erwan Julé, racing from a superb start to 2nd position, who finished in the wake of Thomas Michael Bale. Martijn Van Leeuwen confirmed his good result in the first confrontation with a podium place ahead of Lina Von Schedvin, Benjamin Lessennes, Joonas Lappalainen, the French girl Adeline Prudent, the second female Driver, the Belgian Amaury Bonduel, Martin Ellegard and the German Christopher Dreypsing.


For Media information only – No regulatory value.

For all the information concerning the CIK-FIA competitions, live results and high-resolution photographs (Media heading) click on www.cikfia.com