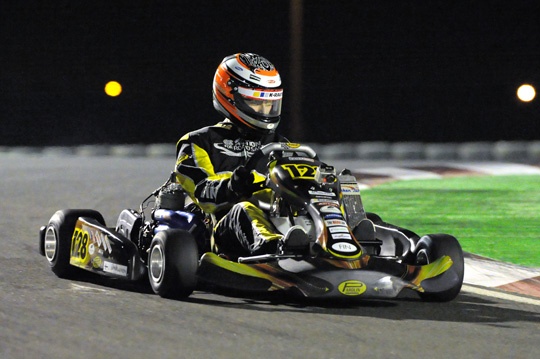 Press Release by: FIA Karting
A mere stone’s throw from the Formula 1 circuit, this weekend the Viva Karting Track in Bahrain welcomes the last round of the CIK-FIA U18 World Championship and Academy Trophy. It is here, in the Sakhir Desert, that on Saturday the world crown for under 18’s will be awarded, and the much coveted trophy for the “Best Academician”. And the suspense is almost tangible!

The Bahrain circuit is writing an important page in the history of karting this weekend. It is in fact the first time that the Middle East has been the venue for a World Championship in the discipline. In this region, and at this time of year, temperatures are well above 30°C, so the timetable for this round has had to be adapted. For three days, contestants will in fact be taking to the track in the second part of the day and will be fighting their later battles well after sunset.

So this Thursday, Drivers had not only to learn this new circuit but also work on their settings for Qualifying Practice, scheduled for early Friday afternoon. They also experienced night driving, under the huge floodlights illuminating some 1,400 metres or more of track. “It’s incredible,” smiled the Briton Henry Easthope (Sodi), Championship leader prior to this last meeting. “Driving at night, with just the floodlights, you actually have the impression of being in an unreal world. You have to concentrate so much more … but I love that!”

Fast and extremely undulating, everyone agrees about the Viva Karting Track. “It really is very enjoyable,” explained the Frenchman Anthoine Hubert (FK), Easthope’s closest rival for the Championship. “It has ascents, descents, and there are a large number of passing places… What is a little strange is that it is so slippery, probably because of the sand deposited on the track…”

Leader of the Academy Trophy, the Finn Joonas Lappalainen, had every reason to be disoriented. “In my country, we have had several weeks of snow,” he smiled. “At home, near Helsinki, there are 20 centimetres of snow and of course it is impossible to go karting. So I am naturally very happy to be here, especially on a track which is really extremely interesting.”

Impressed by the superb complex dedicated to karting, the participants are also delighted by the welcome they have been given by the organisers. Clearly they have laid on a great event. All of the ingredients are there to make the very first world karting competition in the Middle East a true success. It is an event which can be followed around the world on Saturday from 18.00 (16.00 Central European Time) thanks to the live broadcast of the final phases (both for the U18 category and for the Academy Trophy) on the site  www.cikfia.tv.

For Media information only – No regulatory value.

For all the information concerning the CIK-FIA competitions, live results and high-resolution photographs (Media heading) click on  www.cikfia.com