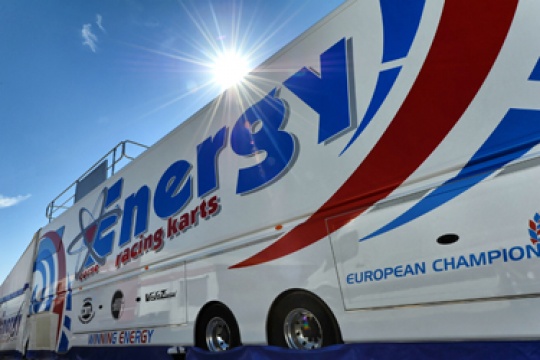 Some of the most important competitions of the season have taken place over the last few weeks and Energy Corse has conquered several successes and major titles.

Once more, the team managed by Mick Panagada has prepared the CIK, WSK and German Championship meetings in the highly professional manner that has become its trademark, in order to create the best possible conditions for its drivers to reach their goals.
After his extraordinary European KZ2 Championship, Simas Juodvirsis conquered the 2012 WSK Euro Series, Sam Snell won one of the European KF2 Championship rounds in Britain and Dennis Olsen has become the leader of the German Championship after his double victory at Ampfing.

WSK Euro Series: Title For Juodvirsis
Simas Juodvirsis concluded his WSK at Zuera as he had begun it at Sarno: with a victory! "I am very happy with my performance", the Lithuanian driver commented. "I narrowly missed victory on Saturday, but I achieved a great success on Sunday after having being alone in the lead". Therefore, after Joel Johansson in 2011, Energy Corse maintained its title in KZ2. Johansson was third in Final 1 and could have taken a podium in Final 2 without an unfortunate collision. But Energy was struck by bad luck especially in KF2. Dennis Olsen, Vasily Romanov, and Sam Snell all fell to the back of the pack in the pre-final. But Olsen, who had won three qualifying heats, climbed up from 27th to 6th in the final race, though the WSK final podium was gone!

European KF2/KF3 Championships: Snell wins
There were many Energy karts in the top positions on the circuit of PF International during the final round of the European KF2 & KF3 Championships. In the Junior class, Connor Jupp finished the qualifying phases in 4th position, before concluding the two races in that same position. Thanks to this performance, the Briton moved up to 7th in the Championship after his disappointment in France. Starting 16th, the US driver Santino Ferrucci staged a remarkable recovery up to 5th place.
In KF2, Sam Snell (Energy North Europe) is still waiting for CIK official confirmation, but his victory in Race 1 can be taken for granted. The British driver showed a strong performance ahead of the drivers fighting for the title. He finished 6th in the European Championship, where his team mates Dennis Olsen and Niklas Tiihonen were also in the top 10. Leader after the qualifying phase, Olsen was stopped when his chain got stuck while he was leading brilliantly Race 1. As for Tiihonen, he was fourth twice. Vasily Romanov scored points thanks to his 11th and 9th positions.

Olsen Leader in Germany
The Norwegian driver Dennis Olsen was the undisputed leader in the circuit of Ampfing in June: pole position, victories in the two heats and then dominance in Races 1 and 2 in KF2! The Energy driver took advantage of this fourth victory in 2012 in Germany to take the lead of the Championship. Energy Corse is also leader of the team classification!

"My compliments to all our drivers, technicians and engine mechanics! Our chassis won in different classes, on different circuits and with several engine brands: this proves the quality and strength of our team" Mick Panigada concluded.