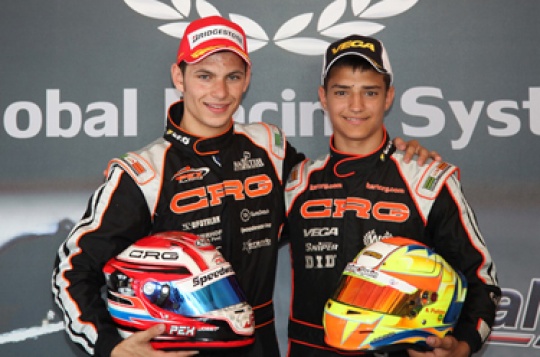 Jorrit Pex of Crg Holland won also the last two finals of Zuera and got the title in KZ1. Alex Palou is the KF3 champion thanks to his victory in the pre-final and to a good placing in the final. Felice Tiene is the runner-up in KF2. Jordon Lennox-Lamb missed the KZ2 title.

Zuera (Spain). Thanks to a double win in Spain, CRG can celebrate the end of the WSK Euro Series with Jorrit Pex on CRG-Tm, champion in KZ1, and with Alex Palou on CRG-Bmb, champion in KF3. Felice Tiene, on CRG-Bmb, ended up on the podium of the KF2 with a good second place: thanks to this placing he is also the runner-up of the championship behind Leclerc.

On the other hand, CRG missed the title in KZ2, despite its driver, Jordon Lennox-Lamb (CRG-Maxter), had managed to get the lead of the championship after his win in Final1 on Saturday. Unfortunately, an accident with Joel Johansson at the beginning of Final-2 on Sunday, prevented the CRG driver from battling for the final victory. So, the title went to the Lithuanian Juodvirsis, Johansson'steam-mate and winner in the last final.

This is what Giancarlo Tinini, CRG SpA president, said about the contact in KZ2 between Lennox and Johansson: “It was a race accident. Lennox should have been more cautious and avoid the tussle with his direct rivals."

PEX CHAMPION IN KZ1. So, in KZ1 Jorrit Pex of CRG Holland is the champion, and he had already won the title in the CIK-FIA KZ1 European championship this year. Pex, who was already leading the ranking from the last race of the WSK in La Conca, showed clearly his superiority in Zuera too.

He won both Final-1 on Saturday and Final-2 on Sunday, driving a kart which was absolutely performing even in such extreme situations, with the great heat conditioning the whole Spanish race since the beginning.

So, after the CIK-FIA European championship and the WSK-Euro Series, Pex can manage to achieve an awesome "treble" for CRG, given that the next KZ1 appointment for the Italian factory and the Dutch driver is the World Cup of 2nd September in Sarno!
On the other hand, always in KZ1 , the other CRG drivers ended their participation in the WSK Euro Series with some bad luck. The Belgian driver Jonathan Thonon had to retire because of a technical problem with the engine after reaching the third place, while the Italian driver Davide Forè slipped back as far as the 12th position because of great troubles with his tyres. Thonon, in Final-1 on Saturday, placed fourth, Forè sixth. Also Fabian Federer was the victim of bad luck, even though - at least - he managed to arrive in 9th in Final-2, preceded by  Andrea Dalè, always on CRG-Maxter.

IN KF3 PALOU IS THE CHAMPION. Great performance for Alex Palou in KF3 on a CRG-Bmb of the official team; he led a very wise race in the Final, after winning deservedly the Pre-final. Palou, on his home circuit, controlled his direct rival Callum Ilott and managed to finish right behind him. In fact, Palou just needed a second place to grab the title, and that is what he got, finishing 7 points ahead in the ranking.

IN KF2 TIENE IS THE RUNNER-UP. In KF2 Felice Tiene confirmed once again to be among the fastest drivers on his CRG-Bmb, after the good result achieved in the CIK-FIA European Championship. In this final round of the WSK Euro Series, the Italian driver's performance was a crescendo of great races, which allowed him to grab the fourth place in the Pre-final and then the second place in the Final; in particular, the second place of the final could have been a victory if he had not been hindered by another driver - who was eventually punished by the stewards.

In this last WSK Euro Series race, Tom Joyner of the LH Team did not gather what he deserved. On his LH-Bmb, the English driver was involved in an accident in Final 1 and, eventually, he finished seventh in the championship.

Bot the Danish Nicolaj Moller Madsen and the French Ingrid Girard did not manage to enter the final, but their performance was encouraging anyway.

IN KZ2 LENNOX OUT IN FINAL-2. In KZ2, unfortunately, Jordon Lennox-Lamb's ambitions got frustrated at the second lap of Final-2 after the accident with Johansson. That is a real shame, because Lennox deserved the title, especially after his great performance in Final-1, on Saturday, when he won his duel against Juodvirsis with a 5 millisecond lead! His reaction against Johansson was then punished by the stewards who excluded him from the event. That's why he finished only sixth in the general ranking.

THE INTERVIEWS
Euan Jeffery, CRG team manager: “We are very happy for the results we got in this WSK Euro Series, where we won two titles out of four categories. In KF3 we won thanks to Alex Palou, and it was no piece of cake. The first three drivers of the championship battled until the end, and Alex did a great job to bring the title to CRG. We have also other CRG drivers who did very well in KF3, such as Vitor Baptista, who's getting more and more performing, and Zachary Claman Demelo. On the other hand, In KZ2, we didn't make the grade because of the accident occurred to Jordon Lennox in Final-2, after his great victory in Final-1. It's a shame, 'cause we could have got another title. There was a great battle in KF2, and Felice Tiene achieved agreat result arriving in second. Also Ingrid Girard did very well in the heats, while for Nicolaj Moller Madsen we need to take in consideration the factthat it was the first time for him on CRG and he needs more time to get theknack of it. In KZ1 Jorrit Pex managed to get another record in the WSK after the one achieved in the CIK-FIA European Championship. A great result, awesome indeed. Good performance also for Jonathan Thonon and Davide Forè, among the best throughout the whole weekend even though they didn't gather what they deserved in the final; while Fabian Federer managed to do a great recovery. Now, our next appointment is in Sarno, for the KZ1 and KZ2 World Cup, in September."

Jorrit Pex (KZ1): “The WSK Euro Series went really well for me. In Spain too we were very fast since the beginning, without any problem. Every race has its own story, but here we neither  made any mistake, nor had any technical trouble. We conquered the title in the WSK Euro Series dominating the three last events in Val d’Argenton, La Conca and here in Zuera. it was fantastic, I'm really happy. Now I look forward to getting on the track of Sarno, for the World Cup, where we'll try to repeat what we did in the European Championship and in the WSK."

Alex Palou (KF3): “I managed to redeem myself for the bad performance in the European Championship in England, and I'm glad of this title of the WSK Euro Series, won right in my Country. Winning the championship was hard, because there are the best drivers of the world. I want to say thank you to CRG for the assistance they gave me. Now I'm really confident for my next appointment in the KF3 World Cup, which is due next 23rd September here in Zuera."

Jordon Lennox-Lamb (KZ2): “I want to apologize because I overreacted after my accident with Johansson, but I was furious for my rivals' strategy. Now I just want to focus on my next appointments: I will run in the KZ2 World Cup in Sarno and also in the KF2 World Cup here in Zuera. Then I'll close with the KF1 World Championship in Macao. I just want to leave this episode behind."