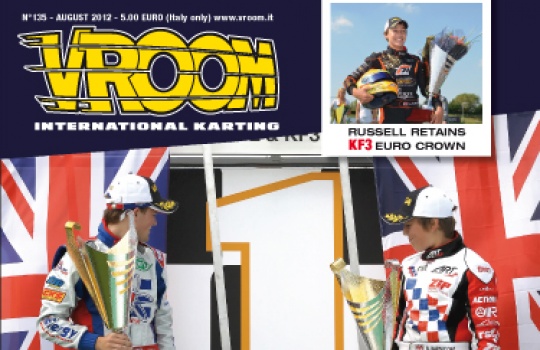 What an end to the Euro KF2 Championship! The PFI weekend was legendary – considering KF standards – producing amazing races both in KF3 and KF2, the latter ending (as you all know) controversially with points leader Verstappen appealing a time penalty in the heats and out of the picture (literally). The likely developments are yet to be made official, but you can read how it all unfolded – and much more - in Vroom August issue...


FROM THE EDITOR
The beauty of karting

In this important moment of the karting season, the picture that continues to come to my mind is that of spectacular karting, the sort that allowed all of us working with news on printed paper to indulge in choosing the most spectacular shots. It is no longer like it used to be when at least one picture would be of a rear wheel lift at each turn, physical law to which any vehicle without suspension and with the basic mechanical characteristics was subject to. Today things have changed. But it isn’t just the karts that have lost some characteristics that allowed for spectacular evolutions like those we see in races on 2 wheels.
Also the tracks are being designed in such a way that races are less exciting, even more so in KF that is, affecting negatively both performance and show.
And the English track of Paul Fletcher, PF International just north of Nottingham, near Donington Park, which played host to the second round of the KF2 and KF3 European Championship, is proof of that.
On the 1,382 meter track that has been changed and improved for the European Championships, one and a half million pounds have been spent to carry out the changes; the races that we saw were a brilliant show, just like the good old days. Yes, also with the KF. A condition where the percentage of responsibility that falls on the driver increases considerably. Now this aspect of the sport is back in vogue. Like the abounding presence of spectators; in England more than in other countries (Italy is behind in this too), there are lots of fans that support their favourite sport. This applies to all sports, not only to motorsports (which are considered like all the others): it’s a question of culture. One thing is sure, if the primordial characteristics for the vehicle and for the tracks were brought back, we would see many more exciting races that would end up drawing the attention of all motorsport fans. Also the majority of photo-reporters, who make the events and drivers’ exploits indelible with their work, seem to have forgotten what the important phases of a race really are, the topical instants that get everyone involved in what’s going on, yes also the spectators. In this issue we have chosen some of the most exciting instants captured by the camera, the same that we have published on our Facebook page in the first two weeks of July, the same ones that have helped us to increase the numbers of “like”. Sharing them enabled us to find out that some pictures do stir curiosity more than any other piece of news. And so be it. Also it’s a confirmation that some tendencies never die but they come back as soon as the right setting is created for them. This is the beauty of karting. The kart is a vehicle that can still be used by the mass for racing without any limit, anywhere and even if it might seem absurd, not only on a tarmac track. And thanks to Facebook, we see more and more examples. The kart is and remains a vehicle with no barriers, free to attract the younger and the older generation. Just like a wild animal that cannot be segregated inside cages, because within a restricted place it wouldn’t be able to show all its explosive magnificence.
Happy reading and enjoy your holidays…

RACE REPORT – CIK-FIA European KF2 & KF3 Championship Rnd.2
George Russell is the fastest KF3 driver and grabs the Continental title for the second year running, for the joy of all the British fans present at Paul Fletcher’s circuit in the north of Nottingham. Joy that later changed to anxiety due to the KF2 results having yet to be decided, with local favourite Benjamin Barnicoat still having a chance to grab title if the MSA decided to disqualify present championship leader Dutch driver, Max Verstappen.

CLOSE UP – Collective test in Sarno
Drivers tried the new configuration of the circuit, as well as the new silencer as requested by the latest phonometric regulations

HOW TO DRIVE – Circuito Internazionale di Napoli, Sarno
A rather fast circuit like the one in Sarno (I) gets a lifting for the KZ1 and KZ2 World Cup due to be held on September 2nd, and is defined as a “fast” circuit, being smoother running  as the slower turns have been eliminated.

TALKING TO – Jorn Haase
In his role as chassis manufacturer, 1984 FK champion appreciates the expansion of karting on a world wide scale, thanks to new markets. But also Jörn Haase doesn’t like everything that karting is and has become, starting from today’s situation in Italy.

RACE REPORT – CIK-FIA “U18” World Championship & Academy Trophy Rnd.1
Despite lots of sceptics don’t appreciate the format, and the detractors can’t see its potential, the “U18” World Championship – for young drivers - finds new lymph in the first round of the season held in Braga. Britons Henry Easthope (U18) and George Russell (Academy) dominate the Portuguese weekend.

RACE REPORT – Asian Karting Open Championship Rnd.1
After a successful 2011 season when AKOC succeeded in backing the global trend with a high number of competitors, AKOC 2012 opening round didn’t meet expectations and proved relatively disappointing, entries reduced by half. The Mini Rok and Junior categories were the most affected, while 25 drivers joined the Senior race.

TRACK TEST – Titan Piston
The piston is a fundamental component of an engine, it determines efficiency and reliability. But, can it “make the difference” also as far as power is concerned? And, is there anything else that can be “invented” in this field? Nino Maiolo, with the help of Oscar Benedetti’s Seven, shows us that using Titan Pistons (characterized by a different material in the central upper part of the piston) response is positive

VINTAGE – Coppa dei Campioni Part 2
During the meeting for historical karts, organised by the Asi in Jesolo with the Cik support, which decided to have this event for celebrating 50 years since the foundation of the “Commission International de Karting”, I saw things that you couldn’t even imagine. And I don’t just mean the karts that have marked the history of karting since its early days to the end of the millennium, but the environment and the general atmosphere lived at this international show. 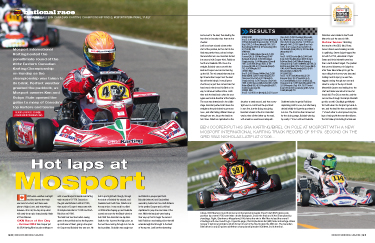 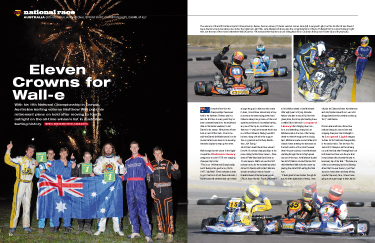 COLUMNS – Mondokart, September racing calendar
The news section includes the latest from Sodi Kart and its new driver support program which saw Alex Baron piling up victories in the F4 French Championship. Australian AKA announced Stars of Karting dates for 2013 season. Zuera will host the Rotax International Open. Unipro launched a new website. Singapore Karting Championship Round 2 to be raced at F1 circuit. Toronto hosted the first Kart Start Grand Prix, and FKS was represented at Goodwood Festival of Speed.
We end with our usual national and international racing calendar section for the month of September, which includes 56 national events from 22 countries around the world, as well as 4 major international races.