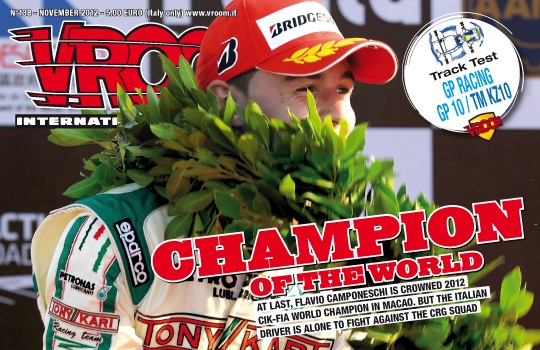 And the winner is... Flavio Camponeschi at last breaks the spell and gets the world crown in the final round of the World Championship, by far one of the most thrilling races of the season. We also report from Zuera, where Felice Tiene and Luca Corberi (yes, two more Italians!) conquered the World Cup for KF2 and KF3. You find our interviews to Charles Leclerc, Pex Racing, Anthony Abbasse and 4-time World Champion Davide Forè for his 30th karting activity anniversary... and the exclusive track test of GP Racing GP10 that impressed in Sarno.


RACE REPORT – CIK-FIA World Championship Rnd.2
Italian driver Flavio Camponeschi resists the tough competition in Macau and grabs the long awaited, awesomely deserved World Championship crown in the year of Dragon. With his performance in Macau, Camponeschi proves at last to be a Top driver (everyone already knew how fast he is!) and deserves the status of Karting Dragon.

RACE REPORT – CIK World Cup
Felice Tiene and Luca Corberi have deservedly gained the World Cup for KF2 and KF3, and with it have re-accredited the school of Italian karting, the same that used to get brilliant results. A very important result and in a more national profile a result that has given credit , proving wrong all those who thought that the line of champions produced by the Italian school of karting had come to an end.

TALKING TO – Charles Leclerc
Young up and coming ART Grand Prix star Charles Leclerc has what it takes to make it to Formula 1. He’s fast, already holds some international karting titles, he’s got his head screwed on and he is managed by one of the most successful motorsport managers out. We learned more about Charles at the World Cup for KF2 in Zuera.

CLOSE UP – Pex Racing
What a fantastic season this has been for Pex Racing. The Dutch team supported by Crg and Tm, which thrust Jorrit Pex to conquer the European KZ1 Championship and WSK Euro Series in KZ2, puts family bond and friendship at the core of its karting activity. Richard Pex, true heart and soul of Pex Racing, welcomed us in his ‘family’ - because this is how you feel when entering his tent – in Sarno for the KZ1 World Cup. 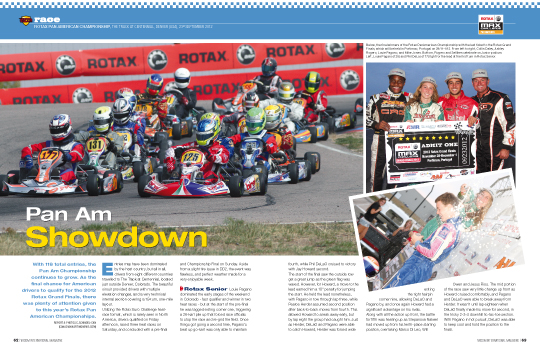 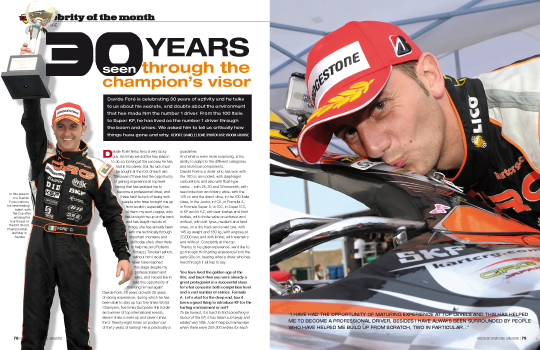 CELEBRITY OF THE MONTH – Davide Forè
Davide Foré is celebrating 30 years of activity and he talks to us about his secrets, and doubts about the environment that has made him the number 1 driver. From the 100 Italia to Super KF, he has lived as the number 1 driver through the boom and crises. We asked him to tell us critically how things have gone and why.

DEFEATS THAT STING – Anthony Abbasse
Anthony Abbasse and Nicola Nolé are the two talented drivers duelling for the ICA European Championship title. They offer great excitement to spectators on the field, one of the best races ever seen, wheel to wheel overtaking worthy of Arnaux and Villeneuve, and a surprising final…a horrible surprise for Abbasse.

TRACK TEST – GP Racing GP10 / TM KZ10
We have tested a kart with which a driver, hardly known, from New Zealand “nearly” won the KZ2 World Cup: here you can see how Daniel Bray’s TM-Daldosso powered GP Racing works, and how the race in Sarno ended (“scars” included…)

CLOSE UP – Data Acquisition Systems – Part 2
Let’s go on with the study of data acquisition for karts, and take a look at the software presented by the four factories that are leaders in this field: Unipro, Aim, Starlane, Rks. 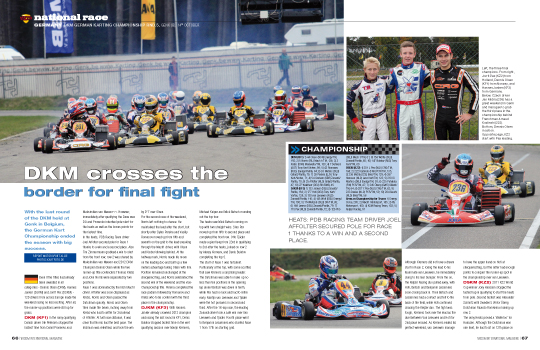 NATIONAL RACES
With the 2012 season at its closing stages, we report the final rounds of the German DKM Championship; the Portuguese National Championship; Australia’s CIK Stars of Karting Series. 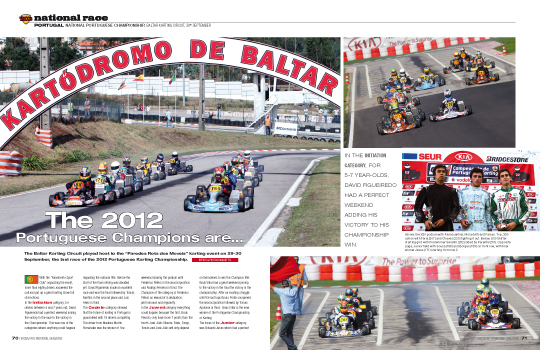 COLUMNS – Mondokart, VroomMama, Learn Your Data
The news section starts off with IPK Dealers Conference ‘Moving Forward’, where the manufacturer of Praga chassis presented some new models and unveiled the OK1 brand. Space to the news from across the ocean, with Florida Winter Tour venues changes announced, as well as the dates of the 2013 Texas Lone Star Grand Prix. Last but not least, Australian CIK Stars of Karting series awarded its legends in Melbourne.
In the new column VroomMama, we advice parents on what not to do in front of their children/drivers. As of this month, we will help our readers get their on-track performance sorted with an accurate study of their Data in 'Learn Your Data' column.