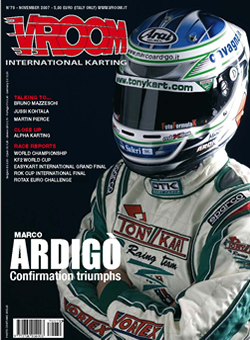 CONFIRMATION TRIUMPHS Marco Ardigò triumphs at the World KF1 Championship confirming all predictions. After this success he enters outright the world karting hall of fame, and Vortex powered Tonykart ends a brilliant season. 14 pages full of news and pictures on World KF1 Championship and the World Cup for KF2 that took place in Belgium with exclusive pictures of the protagonists, their performance lap by lap, and final lap charts.

TALKING TO... This month we’ve had a chat with several protagonists of the season. MIR owner Mr. Bruno Mazzeschi tells us about MIR 25th anniversary, the last 20 of which have been almost exclusively dedicated to karting. We spent a fantastic day with him on the site and we discovered the history of this family run business, always at the top of sports wear business. Then it was Jussi Kohtala’s turn, boss of Finland based Kohtala Sports team. After 16 years racing career, Jussi started his own business as team manager, helping young Finns to reach the spotlight of international karting. He promised he'd have one of his drivers taking the World title, sooner or later! Also, we found Pierce Running Wild, not literally of course! The Wildkart driver told us about his brilliant relationship with the Pozza brothers, and gave us a little preview of what’s to come. And how could we miss a chat with Marco Ardigò, now that he has so much to talk about...

ON THE TECHNICAL SIDE The water pump. It’s a characteristics of the new KF engines, not for the technology that does not revolutionize the working principles, but for its position, completely integrated within the engine.

CLOSE UP A great anniversary has to be celebrated in great style, and French chassis manufacturer Alpha Karting (1977-2007) did just that. We took on insight thanks to Benoit Bremond, Alpha Marketing director.

RACE REPORTS As the Cik Fia racing season drew to an end, the international calendar presented some high profile events. The Easykart International Grand Final, the Rok Cup International Final and the Rotax Euro Challenge final round provided some great racing and lots of excitement. National races in UK, Denmark and Finland also awarded the final trophies of the season, while USA and Brazil have started the countdown to the season finale.

INTERNATIONAL COLUMN Latest news from around the world in MONDOKART, with new products, upcoming events, drivers’ news and the latest from national federations and events. To close with (although for many it’s to start with) the exhilarating adventures of Sacra Biella-Holy Conrod team. The CARTOON this month shows Tardy Braker and Zig Zag messing about on the track, trying to win their “First Podium” of the career… But they’ll have to hurry to get the trophy…