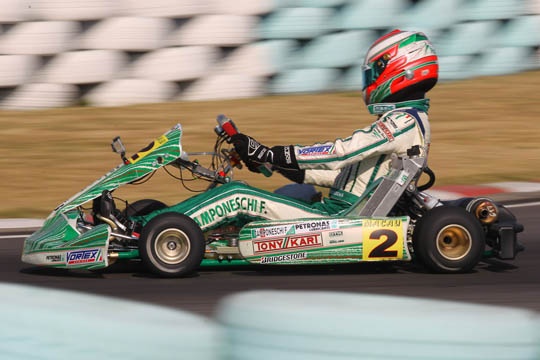 the world title in the decisive round at the demanding Asian track of Macao, fighting against top

drivers and never giving up to the unfavourable fate. Camponeschi had to miss race-1 for an

electrical blackout but in race-2 showed off his World Champion’s talent, recovering from the

thirtieth to the second place.

Three victories, two podiums, one pole position and a fast round. This is Camponeschi and Tony

Kart Racing Team’s path to take our factory to the eighteenth world title. In the Tony Kart’s roll

of honour Camponeschi comes after Marco Ardigò who, a few time ago, in 2008, won the world

title for KF1 category, for the second time after last year.

The decisive competition assigning the World Championship’s title, held on the Asian track of

Macao, saw us winning and the absolute leaders with Flavio Camponeschi.

Racer EVK chassis, powered by Vortex engine, did not fail do meet expectations, giving a clear

confirmation of its reliability and high efficacy. In the qualifying session on Saturday, our driver signed te

second time with 45.740. Good performances were also the Chinese Ling Kang’s, our official driver, at his

debut in the master class, and author of a good eighth timing. Amongst the top-ten list’s drivers also Daiki

Sasaki (Kosmic Kart-Vortex) and Pedro Hiltbrand (FA Kart-Vortex), both at the drive of products

manufactured in our factory of Prevalle.

Race-1 began in the misfortune. It happened to Camponeschi at the starting grid when he had to stop

due to a electrical breakdown. In race-1 our two Asian drivers, Ling Kang and Andy Chang performed well.

This last could show off in this “home” race climbing from the twenty-sixth to the tenth place, winning the

first world scores. Even better was the Japanese Takashi Kasai’s performance, who was placed in the

to win the fifth place.

Race-2. Camponeschi had a great revenge. Our driver showed off his skills and his strong determination,

supported by an excellent chassis. Camponeschi jumped by the last row (30th place) and after the

beginning he could climb the ranking, taking the fifteenth place after the first round only. The wild recover

of the World Champion ended at the seventeenth round with a double overtaking, broadcast live, of

drivers Hanley and Lennox-Lamb. Camponeschi ended at the second place, framing his performance with

an unachievable best lap, with 45.493. In the second competition, too, the Japanese Kasai ended eighth,

Race-3. Camponeschi won the pole position for the third race, thanks to his record in the qualifying heat,

with 45.323. Unfortunately, on this occasion too, the beginning of the race has been crucial for our result.

At the green light Camponeschi jumped and ran fast to the second bend of the circuit of Macao, preceding


Verstappen and the whole group. Right at the sharp braking in the first bend at right, Verstappen clearly

hit the back bumper of the Tony Kart number 2, almost pushing the driver out on the grass. Marshalls

gave a penalty to Verstappen for this “collision” with Camponeschi. On this occasion, too, our driver had to

concentrate to perform a great recover, ending the race with a final sixth place. Verstappen’s “push” at the

starting grid, once more prevented the driver to show off his driving potential. However the result gained

in race-3 virtually gave the world title directly in Tony Kart driver’s hands. This is and undoubtedly

important result, gained one race before the end of the Championship, in such a demanding and selective

competition as the CIK World Championship for KF1 category is.

Race-4. In the decisive competition, Camponeschi adopted a strategy allowing him to win the title for

certain. The only driver who before the race could have jeopardized Camponeschi’s title was the Japanese

Sasaki, at the drive of a Kosmic Kart-Vortex. After race-1 and race-3 performances, our driver agreed with

Camponeschi the CIK-FIA World Champion 2012 for KF1 category. The world title came at the end of a

top-level championship (made up of eight rounds). Camponeschi won three competitions, got on the

podium twice, with a second and a third step, and gained a pole position and a best lap in race. Important

“We owned a better technical potential than we could see at the track, We are satisfied with this final

better in Macao. I’m happy for the team and for Flavio, he did a very good work and he deserves the title.”

“I’m happy and I wish to thank all the team for the fantastic work they did. I am satisfied with this success

together with such a professional team that has always supported me, even when I was unlucky, like on

last Saturday during race-1. I thank all people working in the factory, both Tony Kart and Vortex, realizing

a great work in order to obtain such results. I performed the success of this championship at Macao, when

I won three heats. I could have won again and again since the material was still perfectly working but

of the high competitiveness we had during last weekend, too. I could recover from the thirtieth to the

second place and I decided not to run any risk. In that moment I knew I could win, but at the same time I

could not make any mistake. I’m also satisfied with this success since I was able to fight against top-level

rivals, this means we won for our qualities.”