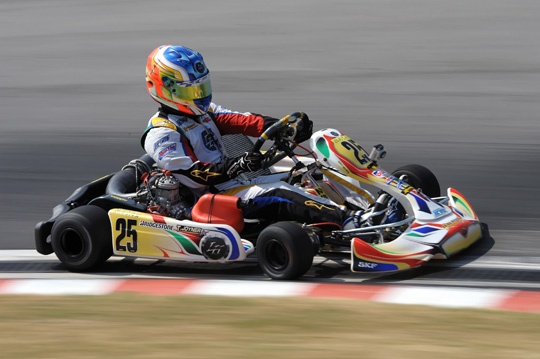 World Championship Leader before the second Event, held this weekend in Macau, Flavio Camponeschi had mixed emotions this Saturday. After abandoning even before the start of the first Race, he started the second confrontation from 30th position. While the Briton Tom Joyner took control for a second time, Flavio climbed back to 2nd place and almost tasted victory. Two Races are on the schedule for Sunday, but the Italian has confirmed that he is rightly favourite to don the world crown.

Not surprisingly, it was sunny and warm at the Macau-Coloane track for the second and last Event in the World Championship. With four Races on the programme, there was plenty of suspense and uncertainty before this first day of racing.

Race 1: Joyner wins, with the favourites out for the count

A great many scenarios were possible before the start of the first Race, but certainly not the one which chance and race circumstances had it store for us. Let down by his starter on the grid, Flavio Camponeschi (Tony Kart-Vortex), who had been second in practice, was unable to move off. The championship leader though at that point he would be losing most of his advantage, but in his moment of mishap the Italian saw a flicker of success when none of his direct adversaries was able to profit from the situation. Never up with the pace of fastest, the Japanese Daiki Sasaki (Kosmic-Vortex) had to be content with the points for 7th place. As for the Italians Felice Tiene and Davide Foré (both in CRG-BMB), they collided after a few laps, with the four-time World Champion forced to retire immediately, and his young team-mate giving up a few laps later with an engine failure. In the CRG camp the atmosphere was anything but celebratory …

With the main contenders for the world title not among the leaders, the outsiders were to take the laurels. Fleetingly leader at the start of the Race, the Briton Ben Hanley (ART GP-TM) could do nothing against Max Verstappen (CRG-TM), from pole position, and then Tom Joyner (LH-BMB). With his chassis flying the colours of Lewis Hamilton, the Briton was clearly the fastest and, after getting the better of his Dutch rival, he went on to what seemed an easy victory. Behind him, Verstappen was resisting the advances of Ben Hanley and Pedro Hiltbrand (FA Kart-Vortex). The fierce battle between the Briton and the Spaniard seemed to be turning to the advantage of the former, but he was given a 10-second penalty and fell back to 6th place. So Hiltbrand took the third step on the podium ahead of the Briton Jordon Lennox-Lamb (CRG-BMB) and the Japanese Takashi Kasai (Tony Kart-Vortex). Behind Ben Hanley and Daiki Sasaki, the Top 10 was completed by the Italian Eddy Tinini (CRG-BMB), the Australian Cian Fothergill (Kosmic-Vortex) and the amazing Chinaman Kang Ling (Tony Kart-Vortex).

Race 2: Joyner makes it a double, Camponeschi is the hero

Probably somewhat relieved to watch his adversaries failing to shine in the first confrontation, Flavio Camponeschi started Race 2 with a taste for revenge in his mouth and a firm desire to save his leadership of the World Championship. Making the most of fresher tyres than those of the other contenders, the Italian was going to do much better than that! With fastest laps one after the other, the spearhead of the Tony Kart team climbed from 30th to… 2nd place! That returned a smile to his face and made him favourite for the Championship once more before the two Races scheduled for Sunday. After his win in the first joust, Tom Joyner did it again, almost as easily since behind him Max Verstappen was force to retire with ignition failure. The son of the ex-Formula 1 driver knows that, failing miracles and an incredible turnaround, he will not be donning the world crown this year. In contrast, Joyner propelled himself to the provisional podium for the Championship and could provide the surprise on Sunday.

After extremely consistent driving, Jordon Lennox-Lamb stood on the podium for the second Race with Joyner and Camponeschi. Very competitive despite his slower pace than his rivals, Daiki Sasaki kept his second place in the race for the title by coming 4th in this second Race. He led Ben Hanley, and also the Italians Felice Tiene and Davide Foré, climbing to 6th and 7th places after their retirement in Race 1 and thus retaining a slight chance of taking the Championship. The Japanese Takashi Kasai was in the Top 10 once again ahead of Pedro Hiltbrand, slowed by a loss of power, and Yuta Shiraishi (Sodi-TM).

On Sunday, the last two Races of the season - to be broadcast live on www.cikfia.tv - will determine the 49th World Championship. As Flavio Camponeschi was saved by others’ misfortune, he is more than ever favourite to take the title. But karting is not an exact science and frequently throws in some surprises.

The Indian Jehan Daruvala (Kosmic-Vortex) conceded nothing to his adversaries in the Asia-Pacific KF3 Championship on Saturday. Posting the fastest time in Qualifying Practice, Jehan then won the first two Qualifying Heats. A third and last Qualifying Heat will be fought on Sunday morning to determine the starting grid for the Prefinal, the result of which will in its turn determine the grid for the Final. Behind Daruvala, the Thai Sasakorn Chaimongkol (Intrepid-TM), the Singaporean Amin Noorzilan (Birel-Parilla), the Japanese Joe Ishida (Kosmic-Vortex) and Sato Marino (Maddox-Parilla) and the Australian Joshua Smith (Kosmic-Vortex) appear best placed to compete with the Indian leader on Sunday.


For Media information only – No regulatory value.

For all the information concerning the CIK-FIA competitions, live results and high-resolution photographs (Media heading) click on www.cikfia.com

DKM, German Kart Championship is all set for a big weekend at ProKart Raceland