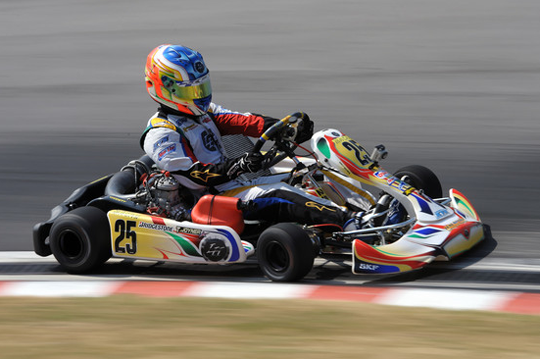 Author: Vroomkart International
World Championship Rnd.2, Macau – Race 3
With the third consecutive win out of 3 races in Macau, this has to be Tom Joyner’s dream weekend. However, the title fight has only two protagonists left, Camponeschi and Sasaki.
Report Vroom / Photo CIK/KSP
Following the morning qualifying, Camponeschi starts from pole, joined on row 1 by Verstappen. Tiene and Tinini make up row 2, and Lennox-Lamb and Sasaki row 3.
The fight at the green light is superb, the field gets shuffled, Verstappen pushes Camponeschi wide at the first corner and the Italian drivers loses several positions (he will get 10” penalty after the chequered flag for it). And the heat carries on throughout the first part of the race, with Verstappen getting caught by Tiene, Lennox and Joyner and dropping to 6th position, with Hiltbrand strongly in 4th and Hanley making up 8 positions from 15th grid start ahead of Sasaki.
Tiene goes on with a blistering pace followed by Hiltbrand who moves past both Lennox and Joyner in the same lap, and Tinini also in the mix. On lap 5 Joyner makes his move on Lennox soon followed by Tinini, and shortly after on the Spaniard too, who loses the position to Verstappen and Hanley in the next lap.
Half way through the race, Tiene still leads on Joyner, Verstappen, Hanley, Hiltbrand, while Camponeschi shadows Sasaki and presses hard. The following lap the action is still on, Joyner grabs the lead as Camponeschi moves past Sasaki, and Hanley conquers the virtual podium in the following lap.
The pace is still as fast as in the early stages, and with two to go Lennox sneaks in the inside to displace Hiltbrand from 5th, while Hanley moves up another position forcing Verstappen in 3rd. In the meantime, Joyner’s advantage increases and he goes on to grab the third win of the weekend. Verstappen tries to gain 2nd back, but Hanley closes the door to grab a truly deserved 2nd place, as Camponeschi gains another position on Hiltbrand to close in 6th.

With Sasaki’s 11th place finish, Camponeschi has a stronghold on the championship title. Two points in the last final would be sufficient for the Italian to grab the World Championship crown were Sasaki to score a win.