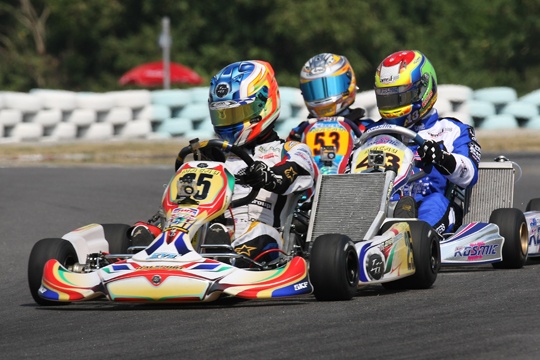 Author: Vroomkart International
World Championship Rnd.2, Macau – Race 2
The British driver on LH hits a super double win in Macau after pulling away from Max Verstappen. But Camponeschi is in the limelight thanks to a superb comeback from dead last on the starting grid all the way to second.
Report Vroom / Photo FM Press

Tom Joyner keeps the lead at the start, he is shadowed by Verstappen for good part of the race and then he increases the gap to Dutch, who few laps later is forced to retire with problems in the ignition.
But the story of the day must be that of Flavio Camponeschi, who shows incredible speed and presses hard to make up places. The Italian driver is just non-stop excitement, with passes one after the other, making up 29 places to finish 2nd at 4”591 from the winner. Sure he could use fresher tyres, he was also very determined to leave the disappointing Race 1 retirement behind him, but what a masterpiece. With such display Campo seems very much set to World Championship glory.
Besides the outstanding performances by Joyner, Camponeschi and Verstappen – the latter was forced out with technical problems while strongly in second place – Hanley showed all his speed in the first part of the race after having to start from 5th due to a 10” penalty he got for pushing Hiltbrand in Race 1 (the Spaniard did pretty much the same but was not punished by the Stewards). The Brit seemed able to bag second place but with 4 laps to go the tyres let him down forcing him to end in 5th. Consistent performance by Lennox-Lamb, 3rd at the chequered flag after dropping to 11th at the start. Sasaki is also in better shape finishing 4th to keep his title hopes alive.
The Italian Crg duo Tiene-Forè is author of a prodigious comeback from the back of the grid to finish 6th and 7th respectively.