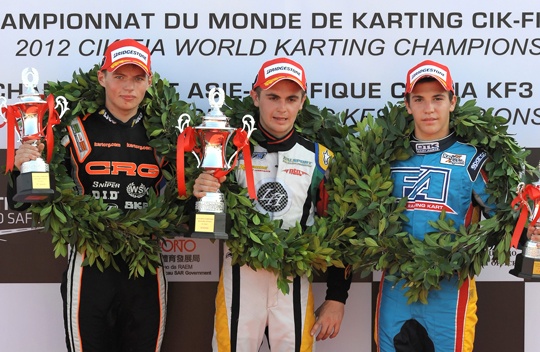 Author: Vroomkart International
World Championship Rnd.2, Macau – Race 1
Tom Joyner is superb in Macau. The English driver brings home the first  CIK victory for LH Team, as championship leader Italian Flavio Camponeschi fails to start.
Report Vroom / Photo CIK/KSP
After the morning qualifying - which saw Max Verstappen stopping the fastest time with 45”599, and Camponeschi and Tiene clocking at one and a half and two tenths off pole respectively – the time came for the hot stuff.

The first final of the decisive round of the World Championship starts with drama, as Flavio Campioneschi fails to start the engine due to ignition problems. The Italian, current championship leader sits powerless in his kart without even making to the grid.
And at the start Verstappen and Tiene have clear road ahead and lead the pack, with the Italian struggling a little in the following laps losing few positions. On lap 8 disaster strikes for Tiene and a charging Forè, the latter trying to overtake his teammate, crashing on him and having to retire with a damaged kart.
Verstappen seems set to grab an easy win, but Joyner, Hanley and Hiltbrand don’t let him go. Particularly the LH driver, who tails the Dutch for few laps and overtakes him on lap 8, pulling away almost effortless. Verstappen has to settle for 2nd as he defends well from a charging Hanley, who had his share of blocking and shutting doors to prevent the Spaniard from gaining the position.
Good performance also by Lennox-Lamb, 5th after starting 10th, and by his teammate Eddy Tinini who fought hard with Tiene (he lost some positions after the contact with Forè and had to retire on lap 16) in the early stages ending 8th right ahead of a very impressive Cian Fothergill from Australia, at his first outing abroad with the aggravation of being the first time on Special Bridgestones tyres.

World Championship still very open, with Camponeschi losing only 9 points to second in the provisional standings Japan’s Daiki Sasaki, only 7th at the chequered flag.