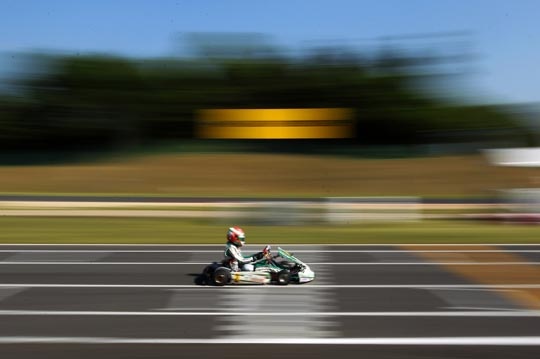 Press Release by: Tony Kart
• On next weekend the World title for KF1 category is going to be assigned at the circuit of Macao.
Flavio Camponeschi, top driver of the Tony Kart Racing Team, is the leader of the world category
• KF1 competition will also see the debut of the new EVK chassis, latest Tony Kart project.
• All four competitions will be live on the FIA web tv at www.cikfia.tv
• Timetable of the world event
• World’s leader opinion, Tony Kart Racing Team, Flavio Camponeschi

At last the long awaiting has come to an end, and the second and definite act of the CIK World Championship for KF1
category will go on the scene on next weekend.
After the Japanese competition in Zuzuka, held on last May, once more the World Championship is taking place at an
Asian circuit. It’s the Coloane circuit, in the vice-Portuguese district of Macao.
The race seems to be enriched by very interesting cues for our Tony Kart Racing Team and not just because the leader
of the ranking with 75 scores is our Flavio Camponeschi followed by the Japanese Daiki Sasaki, driving a Kosmic Kart-
Vortex.
The Asian weekend will also be a prestigious window for the new chassis model from Tony Kart, which name’s EVK. The
new chassis will be immediately recognizable for its new design but moreover its technical features of great importance
will be a valid support for Tony Kart Racing Team’s drivers.
Drivers’ line-up our Racing Team is going to put on the track on this important world event is made up of, other than
the championship’s leader Camponeschi, from the “home” driver Andy Chang (n°44), Armand Philo Paz (n°3), Takashi
Kasai (n°7), Teemu Markus Petjoi (n°8), Ling Kang (45) and Federico Panetta (46).
Competitions assigning the most important title of this karting season will be entirely broadcast “live”, thanks to the CIK
web tv.

It will be possible to watch at each of the four world competitions, with the English running commentary of Ken Walker,
at www.cikfia.tv.

Flavio Camponeschi – KF1 category’s driver - Tony Kart Racing Team
“I’m positive and trustful. The track is pretty demanding and tires will be strained with its long and fast bends.
We will soon concentrate on the chassis set-up for the competition. We will run four competitions in two days and each
of them is decisive for the result. We must keep very well concentrated and not to leave any stone unturned. It’s an
exciting eve.”