Author: Vroomkart International
Polish Bmw-Sauber F1 driver Robert Kubica has reached an agreement with Birel to manufacture a new chassis line bearing his initials. Together with seeing the birth of the RK chassis, Robert will be actively involved in the project by managing an international KF class team.

A very interesting project by the top Italian manufacturer has come into being with the new CIK-FIA 2009-2014 homologation: a Robert Kubica name-branded kart frame line produced by Birel. The partnership between the company based in Lissone and the Polish driver follows their successful collaboration during Kubica’s karting days, when he was Birel Motorsport official driver before stepping up to Formula racing. The Polish pilot has gone a long way since then, but his passion for karting has remained unaltered. Just like the friendly relationship with Birel management.
This initiative will not be a mere commercial operation involving only Kubica’s name, but will see his active participation in the management of a team that will participate to the main international KF class events, like the WSK championship, the European Championships, the World Cups and the KF1 World Championship. Kubica will be supported by Pietro Sassi, important technician who has operated for many years at top levels, with the role of team manager. Also, Robert will be directly involved both in the selection of drivers and the technical orientation. In this regard, it must be underlined that Kubica had several track sessions with the chassis to give his own contribution to the definition of the final technical details. 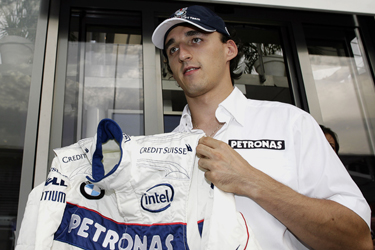 Robert said full of enthusiasm: "I wished to do something active in the world of kart racing, the discipline that allowed me to stand out and take the path leading to F1, and which I still love. With this project I would like to use my experience to focus the work of the team I am setting up especially on the young generations. I would like to offer them effective support to help them stand out in top karting and, if necessary, guide their first steps towards motor racing. I am sure that collaboration with Birel will be a technical and commercial success, and that together we can positively develop this project over the medium run. Karting is a usual training feature for me, therefore I can also provide technical opinions and advice, actively collaborating with Pietro Sassi who will be in charge of the operative management of the team, as well as with Birel technicians and the pilots of the official team. Regarding the names of the pilots, we are assessing applications for all the three KF classes, and might get directly involved in KZ category."

The commercial aspect will be managed by Birel marketing department, which will also define some satellite teams in the international karting scene and in individual national markets. Kubica Kart project guidelines and the official drivers of the Racing Team will be officially presented in December, and the product preview for the international media will take place during Birel end of season party, scheduled on 22nd November in Desio.