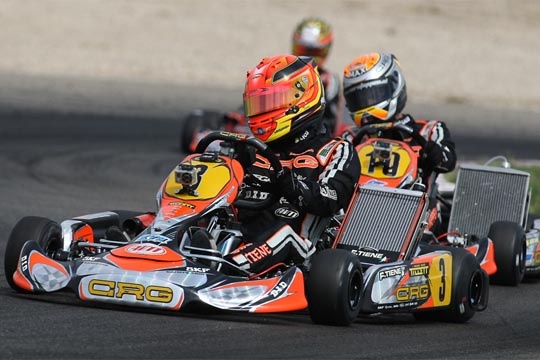 Press Release by: CRG
Crg official team is ready to take all in Macao with Felice Tiene, Davide Fore’, Max Verstappen, Jordon Lennox-Lamb, Eddy Tinini and Tom Joyner with the lh team.
Closing the gap after Suzuka is hard but not impossible: Tiene is 26 points behind, Fore' 28
Lonato del Garda (Brescia Italy). The echo of the CRG official team victory in the KF2 World Cup in Zuera is still resounding - the Italian team placed Felice Tiene, Max Verstappen and Jordon Lennox-Lamb on the podium of the world championship in Spain - but the All Black team is already going East, towards Macao, to try to lay their hands on the last title of the season: the World KF1 Championship.

The round in Macau is going to be as important as the Spanish race, even though it might be even more gripping. On the 1,203-metre long toboggan track of the small Chinese island of Coloane, facing the South China Sea and right in front of Honk Kong, CRG aims at getting a hard but not impossible goal: closing the gap after the first round of Suzuka on 20th May and get on top of the world once again.

CRG READY TO TAKE ALL IN MACAU. Felice Tiene (new world champion in KF2 in Zuera), together with Davide Forè (who won a KF1 final in Suzuka), Jordon Lennox-Lamb (fresh KZ2 world champion in Sarno) and Eddy Tinini are the drivers ready to get on track on the performing CRG chassis powered by the BMB engines prepared by KVS. With them also the quick Max Verstappen on CRG-TM and Tom Joyner on LH-BMB, with the LH Racing Team.

Among the CRG drivers, Felice Tiene occupies the best position. The Italian driver is third behind Camponeschi and Sasaki (Kosmic) with a 26-point gap. Davide Forè is fourth, 28 points behind, Max Verstappen is sixth (-43 points), Tom Joyner seventh (-47), Jordon Lennox-Lamb eighth (-49). In Macau the race will start with this ranking.

In the first round in Suzuka Felice Tiene conquered a second, a third and a fourth place. Then, a crash right against Verstappen during the last lap of the last final did not allow him to get onto the first step of the podium. However, his potential in this second half of the season is much greater: in Macau he is definitely the driver to beat.

THE FEAT IS POSSIBLE! “After conquering the World KF2 title in Zuera - said Felice Tiene  while leaving for Macau - I was greatly celebrated, but now I'm focused on this last appointment of the year. In Macau we can make the grade: we go there to run for the championship. Every race, anyway, has its own story, but I'm confident: we have prepared our equipment with great care. Even though the track in Macau is different from the one in Zuera - it is more slippery and narrower - I don't think this is a problem, neither for me nor for my teammates. After the practice we'll see if we stand a good chance in Macau." 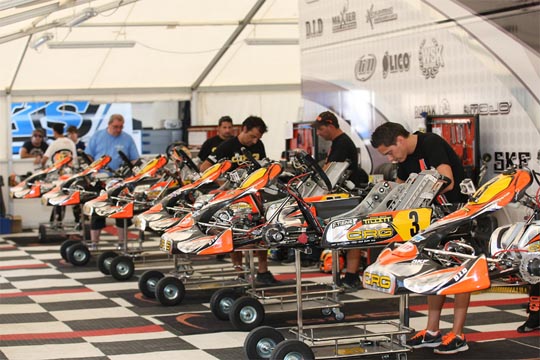 Davide Forè, 5 world titles won so far: “In Macau the appointment is really important and we can achieve a great result. CRG showed, in the lastrace in Zuera, how performing is its equipment: of course it really motivates me. I aim at a great performance and, why not, winning my sixth world title. Mathematic says that we still can run for this championship, even though it is not going to be any piece of cake. I hope I can help CRG; Felice Tiene, too, is running for the title and we'll both try to get the result. Then we'll see, in Macau, who between us stands a better chance. I've been training a lot for this race and, of course, I'll do my best as usual."

Jordon Lennox-Lamb, KZ2 winner of the World Cup on last 2nd September in Sarno: “Here in Macau I feel more confident than in the KF2 race of Zuera, where I placed third, and, in particular, than in the race in Suzuka, which was my first race of the season in KF1. After Zuera I feel more confident about my performance: I know the chassis and the BMB engine better, so I think I can achieve a better result. I know Macau very well; it is a track I like and where last year I placed second in the Asian-Pacific KF1. Macau is a technical track, where you need an excellent setup and a way of driving which allows you to spare the tyres. There are lots of kerbs you can use when turning the bends, and tracts where the speed varies a lot. In Macau we are going to use special Bridgestone tyres and it is important to manage them in the best way possible."