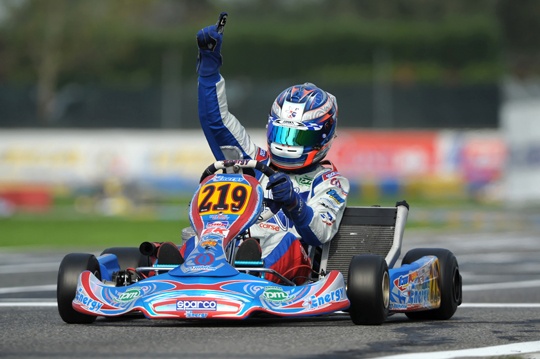 Press Release by: Energy Corse
The Energy Corse Team has never gone long without winning a major competition. Already crowned 2012 German KF2 Champion in the penultimate round thanks to two victories at Hahn-Hunsrück, Dennis Olsen triumphed at the WSK Final Cup. Joel Johansson, who was second in KZ2, also contributed to Energy's outstanding performance at Castelletto di Branduzzo.
Competition was tough at Castelletto and there were several candidates to victory at the WSK Final Cup held in Italy in early October. In KF2, a driver and a team definitely stood out of the crowd: Dennis Olsen and Energy Corse. Although he missed out on pole position by just 0.03 seconds, Olsen made it out of the qualifying heats in the lead and then easily won the pre-final and the final. "It was an incredible weekend" Dennis commented. "Once again, my kart was perfect. A big thank you to the Energy Corse team, which has been on the podium with me so many times both in KF3 and in KF2".
In five races overall, the Norwegian driver set four fastest lap times during the races, while the fifth went to... his team mate Vasiliy Romanov ! Though very fast, Romanov did not perform as well as expected on Sunday, while Sam Snell showed his talent again by finishing 8th in the final race. Kevin Rossel, who joined Energy Corse a few weeks ago, concluded with an 11th place.

Johansson Back Onto the Podium
Not very lucky during the qualifying heats, Joel Johansson showed a great performance on Sunday. "I was only 18th after the three heats and I found it hard to believe I could take a podium. Together with the Energy Corse Team, we fined tuned equipment adjustments and I could regain quite a few positions during the pre-final and the final. Finishing second after driving so little this year is really an excellent result!" the Swedish driver declared.


A comment by team manager Mick Panigada
"Overall, the team was not able to finish off its good work at the recent World Cups for KZ and KF. I am thinking in particular to Dennis Olsen in Spain. He set the pole in KF2, and then he perfectly managed his race during the heats as well as in the pre-final. He was one of the few drivers who could prevent a CRG driver from winning. Unfortunately he was pushed at the start of the final and lost all his chances. As for Sam Snell, he showed an excellent progression climbing up from 21st to 7th place, while Vasiliy Romanov moved up from 23rd to 14th. During their recovery drives, they set the second and third fastest lap times respectively during the race.
And in KZ2, at Sarno, our Energy chassis were well positioned after the heats thanks to Michele Di Martino, Simas Juodvirsis, and Kenneth Ostvold, but in the final phase things did not turn out right. As usual, the team did not give up and Olsen's victory at the WSK Final Cup proves it".