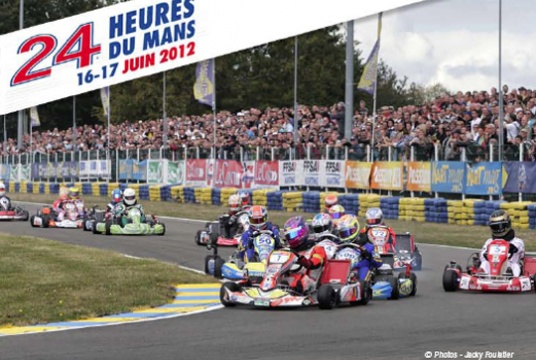 Press Release by: Sodi Kart
Four victories in a row: these are results so far of a successful partnership between Sodi and the RTKF team, in the most challenging karting competition of the season, the famous 24 Hours of Le Mans, which is at its 27th edition. The no. 1 kart crew staged a nearly perfect race, close to the zero errors sought by Claude Jamin, Team Manager of RTKF, who has spared no efforts into finding the highest effectiveness with impressive professionalism, in perfect harmony with Sodikart, the ideal partner for victory.

«Too bad we did not make a one-two finish...», this was Claude Jamin’s first comment about the 24 hours. «We had everything to end 1st and 2nd». This says it all about this demanding and passionate man, meticulous down to the last detail in the preparation of this legendary competition. But he also smiled and added: «A very big thank you to Sodikart, which enabled us to win! Sodi chassis worked wonders. We had no problems from this viewpoint with our two crews, especially as far as the rear shafts were concerned. The level of the competition was very high, but when Abbasse set the pole in timed qualifying even though he was 8 kg above the minimum weight, I really believed in our incredible performance level, combined with well-known kart reliability».

Anthony Abbasse, Antoine Lepesqueux, Antoine Poulain, and Charles Fiault no. 1 crew led the race from start to finish, and scored all the Euro-Endurance - where they are leaders - points possible, up to the finish line they crossed after 1,636 laps, i.e. almost 2,000 km! «After a collision, a steering column changed in 20 seconds was the only inconvenience of the weekend. I am pretty satisfied with how things went». After the huge and careful preparation work for such an event and an organisation set to the millimetre by the technical staff of the two crews, this satisfaction is well deserved. «The 24 Hours is something huge to manage, Claude Jamin added. I am very proud of the whole team. We beat some records at each edition. It only took us 7’’ to resupply, and ACO officials, though used to Audi professionalism at the 24 Hours Cars, were really impressed! A full change: engine, shaft, gear, tyres … and driver, took 3’10’’, with a little touch on the windshield as reward. Sodi offered us a large structure for working, and that really conveys a beautiful image of karting».

A broken rod during the night, and then the kart that went off track with cold tyres and again later the loss of a hub delayed crew no. 72, which fell down from 2nd to 10th position, before climbing up again to 5th upon arrival. The one-two finish was still possible, but the race decided otherwise. The KF2-type Iame motorisation was again perfect, thanks to huge work done by the Boulineau brothers, whose ability is beyond compare. «Endurance proved that KF engines can be very reliable, Claude Jamin explained. When all preparation parameters are carefully set, it is possible to achieve excellent results in this field. Wiring or ignition are no longer a problem. We have also worked a lot with Yacco and their new KVX oil, which is perfect. I also pay great attention to fuel, I use Super 98 that comes straight from a Total station».
Sodi has found in RTKF an extraordinary partner to highlight the quality of its chassis. «What Sodi does is fantastic, Claude Jamin concluded. If all the factories took design, manufacturing and follow-up of their products so seriously, karting would fare better!»

24 Hours of Le Mans Karting 2012: a great victory that owes nothing to chance…