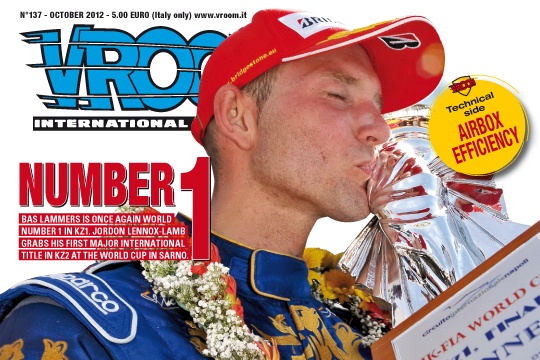 Author: Vroomkart International
The most highly anticipated event of the international calendar, the CIK World Cup for KZ, lived up to expectations. Bas Lammers doubles his 2010 success in the queen gearbox class, joined in the glory by Brit Jordon Lennox-Lamb, victorious in KZ2. And the October issue shows all the action from the world class International Circuit of Naples in Sarno, with the interviews to the protagonists and exclusive shots from behind the scene.

RACE REPORT – CIK World Cup for KZ1-KZ2
A World Cup that is quite different from the one usually seen in Sarno. It could be the new track layout or the complicated situation concerning new silencers, or it could be that several protagonists were missing in the crucial phase of the most important event of the year, however, despite all this, the event for the gearbox classes has once again been very exciting and at some points even spectacular…

FACE TO FACE WITH – Kees van de Grint
At the KZ World Cup in Sarno, CIK vice president Kees van de Grint talked to us about the most important issues that came out in the last CIK meeting with such sincerity that makes him stand out.

CLOSE UP – D. Racing
The recent CIK regulation implementation regarding noise limit brought about new products as well as a new protagonist in international Karting. French silencer manufacturer D. Racing took up the challenge and went home with the world title in both KZ1 and KZ2 at its first attempt. Let’s have a look at the D. Racing with the company owner Serge Riou.

TALKING TO – Bas Lammers
With the win at the KZ1 World Cup in Sarno in September, 2-time World Cup winner Bas Lammers grabbed the first major title for his new Praga Racing team, at its debut season in international karting. We talked to Praga Racing team top driver the day before the final.

RACE REPORT – Asian Karting Open Championship Rnd.3
Drivers from Indonesia and Singapore were on an aggressive pursuit to grab the spotlight after the two Rivera brothers from the Philippines clinched the Formula Open 125 Senior and Junior wins in the previous round.

CLOSE UP – Data Acquisition Systems – Part 1
The data acquisition systems have become a necessity now for racing drivers competing at any level because they help all the drivers to improve efficiently and rapidly, from the World Championship to Regional events. Let’s see four of the most commonly used today.

POINTS OF VIEW – Diaphragm VS Float type carburettors
Once again there is talk about an alternative diaphragm-float type as a solution for solving problems concerning the KF classes. But at the base of it all, there is just a great big misunderstanding, not to say worse.

ON THE TECHNICAL SIDE – Airbox efficiency
This article comes to Vroom “by courtesy” of a Vroom reader in Switzerland, Franco Solazzo, who has given an input on how it would have been more appropriate to present the topic correlated to the column dealing with carburetion; but mostly, it has been made possible exclusively thanks to the “hard work” of a young student from the University in Modena who came to see me. 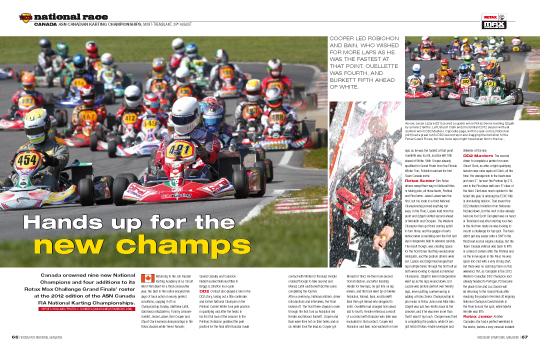 NATIONAL RACES
Time for titles, crowns and awards, starting with the Canadians who had the final showdown in Mont-Tremblant. The BNL Series on the Belgian track in Genk also awarded its 2012 champions, just like Brazil with the two-phase national championships, and the Rock Island Grand Prix, the biggest street race in the world held in the USA.

COLUMNS – Mondokart, November racing calendar and 2013 international calendar preview
Making the headlines, the preview of the Easykart Pan-American championship, scheduled at the beginning of December in Venezuela; the 2013 schedule of the Rotax Challenge of the Americas series; the cancellation of the Ciao Thomas Knopper Memorial race; a new Crg chassis for the Californian market; a new Rotax distributor for Argentina and Uruguay; same KF engines for 2013-2014 in Australia; same organizer – SuperOne – for MSA British championships for five years; preview of the CIK World Cup for KF2-KF3.
The November national racing calendar is not as rich as usual, with most of the races to be held in the southern hemisphere. Despite not being finalized, it’s time also for a sneak preview of the 2013 international calendar.