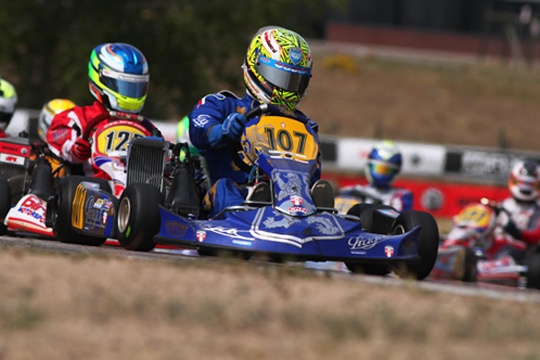 Located in Indianapolis, Indiana, Praga USA will house a national level race team, offer sales of karting equipment as well as set up dealers throughout the United States marketplace.

"Having my own race team and a product that I can be in charge of is something that has been a goal of mine for quite sometime," explained Howard. "I have worked with Marco Di Leo owner of IPK North America and Goodwood Kartways in the past and I feel that with his Praga network and mine in the USA, we can become major players in North American karting."

"We are very happy that Jay and his team are becoming part of the Praga family," explained Petr Ptacek, Owner of IPK and the Praga brand. "This is a very exciting time for Praga, and we are thrilled to have someone with his experience and character representing our brand in the US market. We look forward to collaborating with IPK North America and Praga USA in Las Vegas at the SuperNationals in November."

Praga quickly became a powerhouse team in the world of karting with multiple race wins and podiums since their inception. Just recently, Praga claimed the KZ1 World Championship with Bas Lammers and will look to continue their race winning ways throughout the remainder of 2012. Taking on the WSK Euro and Masters Series overseas, Praga has pushed hard in the in European and North American markets alike. Competing with drivers north of the border in Canada, the United States marketplace will now have a distributor to turn to as they continue to expand and excel towards race winning results.

Howard continued, "I am super excited to be distributing what I feel is the best kart on the market. We went through an extensive test program and I would put the Praga chassis up against any brand that is already established. Also, the Praga factory and I have the same goals for our drivers that include a successful karting career, continuous results and then help the young drivers make their transition to the world of car racing."

"Jay has a great idea on how to grow Praga and his mindset is very similar to mine," expressed Marco Di Leo from IPK North America. "I was handling all of the Intrepid and Praga sales in North America and built a nice foundation of dealers across the USA. I feel now with the introduction of Jay Howard and Praga USA, America Praga drivers will be given a closer more refined service from central United States. Jay and I managed to get together, form a deal and product is already in their possession. I have no doubt that this partnership can benefit all karters throughout North America and customers from around the world."

Already making the switch to Praga is Jay Howard's karting operation, Team MDD. With drivers in both the Rotax Junior and Senior ranks, Team MDD will debuted their new chassis at the Rotax Pan American Challenge. Taking place at The Track at Centennial in Englewood, Colorado, Team MDD and Praga USA were very impressive running at the front of both of the toughest divisions on the circuit, Rotax Junior and Senior.
With a full line of products available from baby karts to complete 125cc shifter chassis, and everything in between, Praga USA is set to take the United States karting scene by storm.

For more information on Praga USA, please contact Jay Howard at 317.731.7186 or visit them online at www.PragaKartUSA.com when it becomes available. Praga USA customers will also be able to purchase Praga karts and components online as well as see the complete line of JH brands at www.JayHoward.com