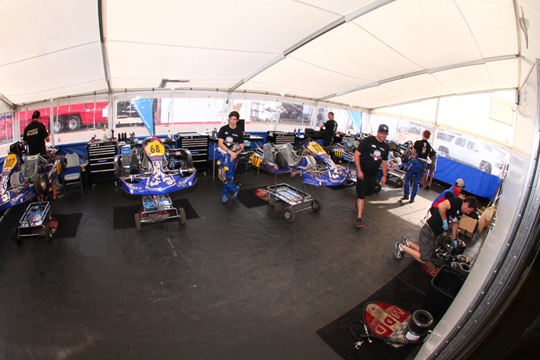 Press Release by: Praga Kart
Team MDD was a busy but organized setup at the Pan-American Championships in Colorado
(Photo: Cody Schindel - CKN)

"Howard and Correa take Praga chassis to the front"

September 27, 2012 - Making the switch to the Praga line of chassis, Jay Howard's Team Motorsports Driver Development (Team MDD) program debuted at the Rotax Pan American Championships in Englewood, Colorado. Competing at 'The Track' at Centennial against strong fields of international competitors, Team MDD drivers showed their speed and flexed their muscles running at the front of the field throughout the weekend.

"I am very happy with the weekend, all Team MDD drivers did an outstanding job," explained Jay Howard. "I'm very happy with the drivers progress and results. This was our first weekend aboard the Praga chassis; all of our drivers had positive feedback, backed it up with results and made progress throughout the event weekend."

With an invitation already gained by Rotax Junior driver Juan Manuel Correa to be part of Team USA at the Rotax Max Challenge Grand Finals (RMCGF) later this season, Correa would compete in the Rotax Junior class in his first event aboard a Praga chassis. With a poor result in one of the three heat races due to contact, Correa would start Championship Sunday's prefinal from inside row seven in the 13th position. Working hard to gain as many positions as possible through the 16-lap heat race, Correa would cross the stripe in the sixth position. Moving up even more in the main event, Correa would overcome his DNF in the heat race to gain a podium result, and became the Rotax Pan American Championships Vice-Champion. 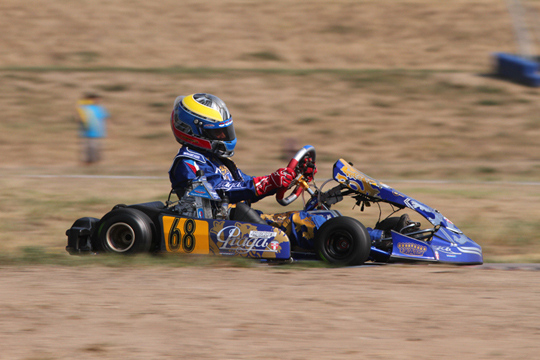 
Team Principal Jay Howard had an outstanding weekend of action after being out of the seat of a racing kart for almost seven months. Taking on a stout field of Rotax Senior drivers, Howard progressed through the heat races in fine form claiming a third, fifth and a sixth before turning up the wick on Sunday morning and crossing the stripe second in the prefinal. The start of the final was a controversial one in the eyes of series officials as Howard quickly jumped to the point. With a strong field of competitors looking to knock Howard down, the IndyCar driver drove incredibly well to be the first to take the checkers.

"Winning the race in the Rotax Senior category was a great testimony to Team MDD. From Ogden USA prepared engines, Praga karts and all team members and employees, we proved we have the best package in the paddock," expressed Howard. "I personally have not raced or been in the kart since the February round of the Florida Winter Tour and there is no way I should be winning the Pan American Championships. The controversy before and after the race is water under the bridge in my eyes and I feel that I am the race winner. It is a true testament to the overall package. Thanks again to all my guys who helped make this happen."

Fellow Team MDD driver Evan Mehan had his best career finish at a major event crossing the line in the seventh position after going 14th, 11th and 12th in the three heat races in Rotax Senior. Working hard to move forward from his prefinal starting position of tenth, Mehan crossed the line P7 in both of Championship Sunday's on track races. Roger Ralston Jr. and Hunter Ceto would round out the Rotax Senior Team MDD driver lineup coming home 15th and 16th respectively.

Next on the docket for Team MDD is the annual Robopong 200 where drivers will battle in a 200-mile endurance race as they all vie to have their name imprinted on the Dan Wheldon Memorial Cup. After that, Team MDD will shift their focus to the granddaddy of them all, the SuperKarts! USA (SKUSA) SuperNationals held on the grounds of the Rio All-Suites Hotel and Casino in Las Vegas, Nevada.

For more information on Team MDD, please contact Jay Howard at 317.731.7186 or visit them online at www.JayHoward.com. As a driver development program competing around the world at international events, Team MDD utilizes the championship winning Praga line of chassis and Ogden Racing Engines. To follow Team MDD with event updates and real-time news, please like their Facebook fan page at http://www.facebook.com/TeamMdd or follow them on Twitter at @JayHowardRacing