Author: Vroomkart International
With the event of new millennium, also in the international karting circus, the idea developed that karting was a very important experience for drivers like Lewis Hamilton, who seemed to be about to go on to F1, the top motor car racing. This field that was to mark out the future F1 champion from those in the karting circus was not absolutely true then and it still isn’t. And how could have been? Infact, too many factors are involved in the success or insuccess of a driver, and  Hamilton could be the exception that confirms the rule. Plus, Ron Dennis' role, who has been supporting Lewis, placing his bet on him already from Lewis' early karting career. A modern fairytale and great story to tell... and Lewis Hamilton is the protagonist.
Going back in time, I could only ask Dino Chiesa who has helped me to underline and depict Lewis' remarkable character... it’s almost as though there’s a halo all about him. And maybe this is the case. The new era of the karting image starts with two pupils - Lewis and Nico Rosberg - from the Mercedes Benz/McLaren: MBM. Dino Chiesa was asked to take over the management of the team sponsored by the Anglo-German team. The karts being used were made by Crg. But let’s take one thing at a time.
MBM was set up at the end of 1999. The name is short for Mercedes Benz/McLaren. Dino Chiesa, then, sports manager of the Crg team, was chosen to manage and train Rosberg and Hamilton, both 15 year-old. Danilo Rossi took over as Crg sports manager. This decision was a logical consequence due to the fact that Nico Rosberg was already racing with Crg in 1998 with Dino Chiesa, while Lewis Hamilton came straight from the British team and TopKart/Comer Zip Kart concessionaire of Martin Hines on the occasion of the MBM project. The promoter of this joint venture between Crg, Dino Chiesa and the respective drivers was Keke Rosberg, Nico’s dad (F1 World Champion in 1982 and Mika Hakkinen’s manager, World Champion in ‘98/99 always with McLaren).

This glossy image of the karting circus, with such an important brand such as Mercedes Benz/McLaren, only lasted two years, from 2000-2001. A meteorite that left a mark in passing, MBM’s two standard bearers with Dino Chiesa as their manager. They took the FA European Championship win, Hamilton leading on Rosberg, and at the World Championship, that same year they both suffered mechanical problems. Lewis was fantastic though in the World Cup, held in Motegi, Japan, the classic Japanese championship that is usually held in Suzuka. Passing to FSA, in 2001, wasn’t one of the best experiences. That was the advent of water-cooled engines. Then the year after Rosberg went on to Formula BMW and won the German championship. In 2003, Hamilton took first in Formula Renault in the UK, while Nico worked his way through Formula 3. In 2004, Lewis goes on to Formula 3 too, while Rosberg undertakes the difficult task of the Euro Series. In 2005, the German wins the GP2 and Lewis takes the F3 title. 2006 is the year that promotes Nico Rosberg in F1 driving with Williams, while Hamilton follows the steps of his ex teammate and wins the GP2. In 2007, the British driver with McLaren surprised everyone taking the championship lead after matching his skill with a teammate who was no other than Fernando Alonso, missing the World Championship title by few points lost at the last race in Brazil. Pretty much what happened few weeks ago, but this time with Lewis taking the crown,  at the very last turn. 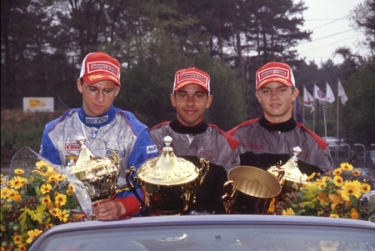 Dino Chiesa helps us to highlight some basic characteristics concerning these two drivers when they used to race in karts. Both were very fast, hardly any time difference in lapping. However, Nico avoided taking risks, he was happy with the results he got while Hamilton was more determined and that’s what makes the difference in racing. Another thing in Hamilton’s favour was that he always had a trick up his sleeve, he used 90% of his potential and only when it was necessary did he give it all he had, and that was usually as the race was about to end. The same strategy that Lewis seems to adopt even today in F1.